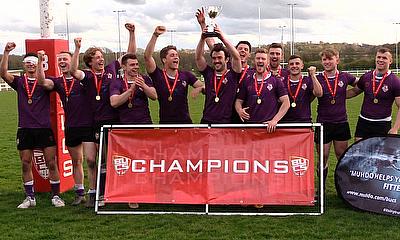 Durham left an entertaining BUCS Sevens competition with the Championship trophy after a great day of action at West Park Leeds Rugby Club on Wednesday.

The north-east outfit  were 26-24 winners against an exciting Hartpury side in the men’s final with head coach Alex Keay revealing that the team “continued to believe in themselves” throughout the competition and more so during the final when they trailed by 10 points at half-time.

In an excellent sevens final, BUCS Championship winners Hartpury and a strong Durham outfit battled hard in Yorkshire, but three second half tries for Durham proved to be decisive as they secured a victory by two points.

Durham went through the whole of the competition undefeated after topping Pool C with three straight victories against Birmingham (31-17), Leeds (36-0) and Cardiff Met (19-5) before progressing into the knockout stages.

Keay said after the final: “For any university, you want to win and this is probably the best win I have had here. We have always done well at the sevens to be fair. We had a very special group of lads today because they worked so hard. Their effort rate was world class and they got the reward for that.”

How the Men’s Championship unfolded

Route to the last four

Before taking on Bath in the semi-final, Durham had to negotiate a tough pool stage but they progressed with minimal fuss as three straight wins saw them pick up 14 points from a possible 15 while Cardiff Met also advanced from Pool C. Met’s only defeat came against Durham and impressive wins against Leeds and Birmingham saw the BUCS Championship finalists move into the last eight.

Hartpury were drawn into Pool B and like Durham, they made it to the final unbeaten. Successive victories against Edinburgh (15-0), Nottingham (29-5) and Loughborough (31-10) saw the Gloucestershire side breeze into the knockout rounds. They were joined by Edinburgh from Pool B who recovered from their Round One defeat to beat Loughborough and Nottingham.

Northumbria also completed the pool stages without suffering a defeat. Darren Fearn’s men secured wins against Bristol, Exeter and Nottingham Trent in Pool A as the north-east side carried their excellent XV-a-side form into the sevens format. The aforementioned Nottingham Trent were the surprise package in Pool A as victories over Exeter and Bristol saw them reach the quarter-finals.

Congratulations to both of our men’s and women’s teams in the @BUCSsport 7s finals! Best of luck, bring it home! #OhHartpury ?? https://t.co/cB8kq7RWTL

Leeds Beckett, playing on home turf, topped Pool D thanks to three victories over Bath, Newcastle and Bishop Burton while opening wins for Bath were enough to see Aaron James’ side advance into the next round.

In the quarter-finals, three of the four pool winners continued to show their strength while Northumbria failed to maintain their momentum as they lost 24-7 to Bath. Durham ended Edinburgh’s championships with a 26-12 win while Hartpury and Leeds Beckett sent out their own messages as Hartpury beat Cardiff Met 34-12 while Beckett thumped Nottingham Trent 31-5.

So, Bath and Leeds Beckett joined Durham and Hartpury in the last four, but both suffered convincing defeats. Durham beat Bath 24-10 in the first semi-final while Beckett were blown away by Hartpury as they fell to a 36-0 defeat.