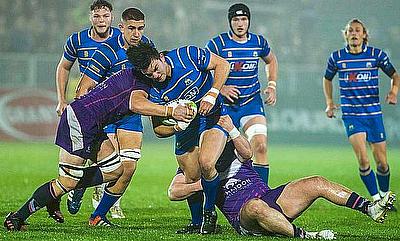 The University of Bath will compete in the BUCS Super Rugby Championship semi-finals for the second consecutive year on Wednesday and head of rugby Aaron James wants the journey to Twickenham to continue.

A strong Cardiff Met side stand between Bath and a place in the final after the Blue and Golds put in a superb performance to beat Northumbria University in the last eight.

Having finished the domestic season in a disappointing seventh place with just four wins to their name, Bath seem to have found their feet in the knockouts as they aim for Twickenham glory.

Congratulations to @UOBathRugby for their victory in last night's @BUCSsuperrugby quarter-final. The team play @cardiffmetrfc at @TeamBath in the semi-final next week. We'll have details on tickets for the game later today. pic.twitter.com/afPDtfaZrb

“I was really pleased with the result [against Northumbria] and really happy that we are finally starting to click in a number of areas, especially in attack,” said James.

“We scored some very good tries from both set-piece and phase play so we were very happy to have scored six against Northumbria. As I said to the coaching group, it has been a pretty long pre-season for us!  It has taken quite a bit of learning.

“BUCS Super Rugby has stepped up significantly again and we have been the architects of our own defeats sometimes.

“We have worked really hard and the players have really focused on getting their processes right and it was just pleasing to see against Northumbria that they were rewarded with some good tries and a really good win. The character was outstanding.

“We lost eight players from our win over Cardiff University when we played Northumbria and it was pleasing to see guys step-up and put in a performance. It was credit to their hard work, but also the depth we have.

“You can’t change too much, but then you do have to change somethings because in the knockouts, there is no bonus –point. To coin the cliché, it is now winner takes all.”

After an excellent display on their travels against Northumbria, Bath will be back at home on Wednesday. However Cardiff Met, who finished third in the domestic season, will provide a tough test, especially after beating Bath twice during the BUCS Super Rugby campaign and defeating Loughborough University in the quarter-finals.

FULL TIME | @cardiffmetrfc are now one game away from a dream #BUCSSuperRugby Championship Final at Twickenham ?? pic.twitter.com/rfN2V0s7mx

“They [Cardiff Met] are a team which have really come together from last year,” said James. “They are physical at the breakdown.

“They defend really hard and collectively very well so we have a big dogfight on our hands, but we have given ourselves a shot.  With it being a big semi-final and with the pressure of a big prize at the end of it, it is exciting.

“In terms of us, we seem to have a better away record! We are bucking the trend a bit so we might have been better away!

“We showed against Cardiff University that we can really put in a performance at home so we are keen to bring back a home game to the University Bath and give the people who have been supporting us something to cheer about and hopefully we can reward them with a win in a semi-final.

“It would be massive for us to reach the final. It is such a big motivation for us all. We have made a bit of a five-year goal for ourselves and to get it this year would be outstanding.  Again, it would be a great reward for the hard work that’s gone in across the university.”

While Bath and Cardiff Met are set to do battle in the southwest, the semi-finals kick off just under 90 miles away when the University of Exeter and Hartpury renew their rivalry at Topsham.

This will be a repeat of last year’s BUCS Super Rugby Championship final which Hartpury won 27-24, but the sides have had differing journeys to the semi-finals this term. The hosts, Exeter, are the newly crowned BUCS Super Rugby champions after an excellent domestic season. They fought-hard to reach the last eight of the knockout stages as they beat Nottingham Trent University 41-26 which was their 13th win of the season.

Arguably, Keith Fleming’s side are the favourites for a league and cup double, but current holders Hartpury may have other ideas. Sean Lynn said after their 29-10 quarter-final win over Leeds Beckett that ‘everyone had written his side off in November,’ but the Gloucestershire outfit have completely turned their campaign around. After one win from their first seven games, Hartpury will head south on Wednesday having lost just one of their last 10 matches and in that spell, they did beat Exeter 27-26. This semi-final promises to be an absolute cracker.