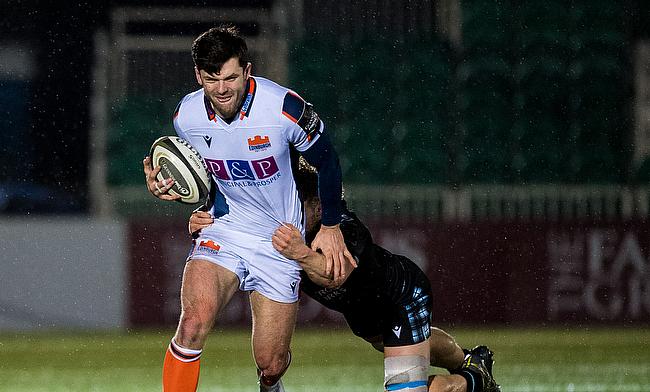 There are players who seem to have been around for an age in rugby from time to time, but when you check their date of birth, you realise that they are still young and have a long career ahead of them.

One who certainly falls into that category, well for this correspondent anyway, is Edinburgh Rugby and Scotland back three player Blair Kinghorn.

I can vividly remember interviewing a gangly, shy teenager back in April 2015 at BT Murrayfield when the Scotland squad for that summer’s under-20 World Championship in Italy was named.

Kinghorn and Robbie Nairn, both still school pupils at Edinburgh Academy and George Watson’s College respectively at the time, were the ‘bolters’ in that group named by then Head Coach Sean Lineen.

They had both impressed with the under-18s earlier in the year, and while winger Nairn was soon on the move to the Harlequins Academy and has since been at Glasgow Warriors, Kinghorn joined his hometown club Edinburgh and has never looked back.

After learning the ropes in his first season with Edinburgh, he made his professional debut during the 2016/17 campaign and has pretty much been a regular in their matchday squads ever since.

Indeed, he has made the number 15 jersey his own with Richard Cockerill’s men while, since making his Scotland bow off the bench against England in 2018, he has played on the wing for them mainly and Gregor Townsend is clearly a big fan.

All of what has happened in the last six years is all the more impressive when you consider that Kinghorn, who was also a good footballer in his teens, played stand-off almost exclusively whilst growing up.

Mark Appleson, who was Director of Rugby at Edinburgh Academy whilst Kinghorn was a pupil there, is proud of what he has achieved.

“In terms of recollections from school, it was always pretty obvious that he was going to be a very good player,” Appleson told TRU.

“He had all of the physical attributes required to play representative rugby but suffered throughout his early career with knee problems. Indeed this ruled him out of Scotland under-16 selection.

Congratulations to former EA pupil @Blair_Kinghorn who has been named in the @Scotlandteam squad for the upcoming 6 Nations. Good luck Blair ?? #sixnations pic.twitter.com/jyFC3QHUWO

“He started to really impose himself in fifth year [the second last year of school north of the border] as a young influential first XV stand-off playing in a team that struggled a bit. He was outstanding that year and really put himself in with a shout of national selection at under-18 level.

“He was injured early in his final year as captain of the First XV and only played seven matches, however, he was unbelievable during those seven matches and had clearly gone to a different level. He also supported the boys well even when he couldn’t play.

“He played for the club team at Edinburgh Accies during this year and had a blinder for Scotland under-18s against England which really pushed him towards the under-20 World Championship squad.

“I always thought of him as a stand-off, but once he was into the Edinburgh environment, an opportunity arose for him to make his mark at 15 and boy has he done that.”

“He has a massive boot on him - when needed, he can absolutely launch the ball!”

Appleson, who himself was a very good player who turned out for London Scottish, Sale and Leeds whilst also representing England at under-16 level and Scotland at sevens and ‘A’ level, believes Kinghorn can get even better in the next few years.

“He has only just turned 24, the future is very bright for him,” the man who is now Director of Sport at Fettes College in Edinburgh stated.

“When he first moved to 15, I think the main thing he had to work on was taking high balls, but he is a brilliant open-field runner and I think the way he sees the game from the backfield really helps those players around him.

“He is a lovely runner with the ball in hand and he just seems to have so much time and space on the ball while I like his link-up with Darcy Graham in that Edinburgh back three. They are the kind of players supporters want to watch.”

“Blair also has a massive boot on him and when needed, he can absolutely launch the ball! I think he will really mature as a player further in his mid to late 20s. I think that is when we will see the best of Blair.”

“In training, I might get pushed to the oldies soon!”

Earlier this week, Kinghorn signed a new contract with Edinburgh, a club he has made nearly 100 appearances for, on his 24th birthday.

According to the player, it was an easy decision to make.

He said: "I’m Edinburgh born and bred and I grew up supporting the club. The club really means a lot to me. It has a very special place in my heart.

“I’m still on the young side when we split into ‘youngies and oldies’ in training, but I might get pushed to the oldies soon, given the number of young guys coming through!

“It’s really something to look forward to.”

Edinburgh’s squad for the rearranged league match with Zebre in Italy on Saturday will be named on Friday lunchtime and it will be interesting to see which players, Kinghorn included, who were named in the Scotland squad this week make the trip.

With Scotland’s match against England in their Six Nations opener still 15 days away, you would imagine Edinburgh will travel ‘fully loaded’.

Zebre v Edinburgh Rugby takes place in the Guinness PRO14 on Saturday at 1pm GMT and is live on Premier Sports.