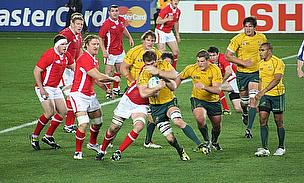 Australia face the tough prospect of Ireland this weekend
©TRU

The third round of the QBE Autumn Internationals sees 11 test matches taking place all over the globe.

The theme of the weekend is milestones, as an extraordinary number of players earn important caps for their respective countries. Legendary All Black fly-half Dan Carter will win his 100th cap on Saturday as the World Champions lock horns with England at Twickenham.

Also in the game New Zealand lock Sam Whitelock and English hooker Dylan Hartley (playing against the country of his birth) both win their 50th caps.

Elsewhere, Italy’s Sergio Parisse and Martin Castrgiovanni are both set to play their 100th test matches for the Azzuri, when the Italians take on Fiji in Rome.

There are plenty of mouth-watering matches this week with most international rugby teams of any note playing.

Top of the bill is the eagerly anticipated re-match between New Zealand and England at Twickenham.

The men in white upset the All Blacks last year, handing them a crushing defeat that would be their only loss of 2012. One year on from that magnificent day for English rugby, the same scenario is presented again…

New Zealand are again undefeated so far this season. On the other hand, England are also undefeated at headquarters this year. It’s sure to be a great game!

Talking Rugby Union’s New Zealand correspondent, Scotty Donaldson, added that “as an All Blacks fan I am hoping that the All Blacks gain revenge from 2012 and win at Twickenham.

“The All Blacks hate losing, but especially losing to England.

“New Zealand will be more aware of this England team which will be missing players like Manu Tuilagi, Alex Corbisiero, Mako Vunipola and Christian Wade, through injury.

“This All Blacks team won't be happy with their game after they beat France with a patchy performance.

“Cory Jane is the casualty from the French test with Charles Piutau joining Julian Savea on the wings. They really have an embarrassment of riches.

“Luke Romano comes onto the bench meaning the All Blacks have gone for power on their bench over speed.”

The November Autumn International’s are so diverse with games in locations as far as Georgia, Uruguay and Japan play Russia in Wales.

Italy should celebrate their centurions with a win over Fiji, Wales, France, Romania and Uruguay should also all win at home, although France should win by the most.

Australia, South Africa and the All Blacks must win away against their opponents. I think the class of these Rugby Championship heavyweights should shine through. These matches are difficult to pick margins for, but I think the Springboks will be the more comfortable winner.

The French Barbarians vs Samoa is difficult to pick. Samoa were thrashed by Ireland last week, but it is always tough for these Barbarians type sides to gel enough to win.

Nic White ruled out of Australia's Test series against France