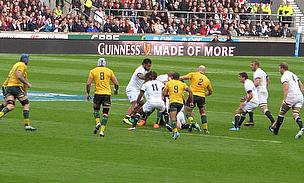 England have made one change from last weekend’s starting line-up that will face New Zealand on Saturday.

Leicester prop Dan Cole returns to the side in place of David Wilson ahead of England’s final international of the season with the World Champions.

The 23 man match day squad was announced by Stuart Lancaster at ten o’clock this morning, with a further two changes from last weekend amongst the substitutes. Debutant Wasps prop Matt Mullan comes on to the bench in place of the injured Alex Corbisiero and scrum-half Ben Youngs gets the nod ahead of Danny Care.

Only seven of the team started the surprise 38-21 win over the All Blacks at Twickenham in December last year.

This is the result of a plethora of injuries amongst the England elite camp, as a number of potential first XV players – Props Alex Corbisiero and Mako Vunipola, centres Brad Barritt and Manu Tuilagi plus wings Christian Wade and Marland Yarde – are all absent through injury.

Northampton hooker Dylan Hartley featured in the incredible victory over New Zealand last year, and on Saturday at Twickenham the 27-year-old will win his 50th cap for his country.

Head Coach Stuart Lancaster added at today’s conference that "It's a great achievement for Dylan. We are a young side but one that is growing with every game and it's important to have leaders like Dylan."

Elsewhere, on the other side of the home of rugby, the World Champions are in town and it’s a special cap for one of their own.

Legendary fly-half and record test match point scorer, Dan Carter, was today selected in the starting line-up, meaning he will win his 100th cap for his country.

Yesterday, All Black number 8, Kieran Read, asserted that a win at the weekend will be more about honouring Carter’s incredible milestone test match rather than settling old scores:

"I think you look at the man who Dan is and he will put the team above everything," Read told Sky Sports.

"But at the back of my mind, if he is playing I would want to do well for him. It can affect you if you start chasing your tails. To be honest, it has not been used as motivation at all.

"Certainly you don't like losing in a black jersey, but there are a lot of things that have changed in the last 12 months. It is a completely different team in a different place right now.

"You want to win every time you play and that is our mind-set this week."

Meanwhile, The starting line-up for the second Test of their European Tour features just one change from the team that played France last weekend, with wing Julian Savea coming back into the side after his illness, replacing Cory Jane who is not in the 23.

In the reserves, there is just the one change, in the forwards, with lock Luke Romano coming in as second row cover, replacing Sam Cane.

Saturday's matchday squad mixes experience with relative youth, with 959 caps in the 23, which boasts an average age in the mid-twenties.

Head Coach Steve Hanson said: "this is a Test match we are very much looking forward to."

"We were completely outplayed by them last year but this is an opportunity for us to see if we have improved our game to the point where we can be competitive.

"The players are excited because this is what Test rugby is all about."

He added: "We are expecting a really physical game with huge intensity, but also a game that will have high levels of energy, pace and skills.

However, most interestingly, the All Blacks boss hinted: "We know the England coaching staff have done a lot of homework, so this may be a game where we add a few new things they haven't seen before."

The sides lock horns at 2:30 on Saturday afternoon in England’s final test match of the year.