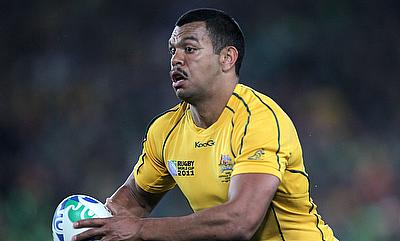 Wasps have acquired the services of Australian international Kurtley Beale for the upcoming 2016-17 season.

Beale has signed to a one-year contract with an option to extend it by 12 more months and the annual salary of the utility back is reported to be over £700,000 which is highest among the Premiership players.

Having made his Test debut in 2009 for the Wallabies, Beale has made 60 appearances for his country with 118 points including 12 tries and 18 penalties.

The 27-year-old has also featured in 12 World Cup games with his last appearance for his country coming against the 2015 final against the All Blacks in Twickenham.

Wasps director of rugby Dai Young termed the signing of Beale as "exciting" and described the Wallabies player as a "rare talent."

"There are very few players in world rugby who can really excite people and get spectators on the edge of their seats. Kurtley Beale is one of those rare talents."

Beale made his club debut with Waratahs in 2007 and was part of them for four years following which he switched to Rebels in 2012.

However, after a one-year stint with Rebels, he switched back to Waratahs again in 2014 and now will leave the club after the completion of the ongoing Super Rugby campaign to be part of Wasps.

Young also praised Beale for his competitive nature and attacking style which he believes will suit the Premiership club.

Beale also brings the flexibility to the squad after having the experience of working in various positions which includes inside centre, fly-half and fullback.

"Every time Kurtley gets the ball in his hands, you can sense the anticipation among those watching that something is going to happen," Young said.

"At Wasps we like to play expansive, attacking rugby, and these are the type of players we want within our set-up.

"Kurtley's versatility is amazing when you think he's played international rugby at 15, 12, wing and on occasion at 10.

"To sign an international rugby player who can perform in all those positions will be a great strength for us moving forward.

"Kurtley has been part of many successful environments and the experience he will bring should help the squad in a similar way to how George Smith and Charles Piutau have this season."

Beale's highly successful career hasn't come without controversies. During his stint with Rebels, Beale was reported having punched his captain Gareth Delve on a team bus after a match following which he underwent counseling for alcohol related issues.

On October 2014, Beale faced a disciplinary hearing after he had sent offensive text message to team’s business manager Di Patston following which the Wallabies star was fined $45,000 for breaching ARU code of conduct.

Beale said even though it was a tough decision to leave Waratahs, he loves playing in England is looking eager to be part of Wasps.Citing the example of atmosphere during the World Cup, Beale feels the game is very passionate in this part of the world.

However, Beale, who is still eligible for national selection with over 60 Test caps, said he would love to continue representing Australia.

"I can't wait to move to England and pull on the Wasps jersey," said Beale.

"It's going to be difficult to leave the Waratahs at the end of this season - I first joined the Waratahs when I was 16 and have loved every minute of it, but I feel the time is right to make this move.

"There was a lot to weigh up when making the decision, but I have always loved playing in England and the recent World Cup was an amazing experience. The passion for the game in Europe is huge and I want to be a part of it.

"Wasps are a big club with a great coaching staff and a very talented playing roster. I am only 27 now and I know my best footy is ahead of me, both at club and Test level.

"I want to win trophies with Wasps in the Premiership and Europe and continue playing for the Wallabies.

"It's a privilege every time you get to pull on that Test jersey and if I'm lucky enough to be selected for Australia in the future, I'll be ready."