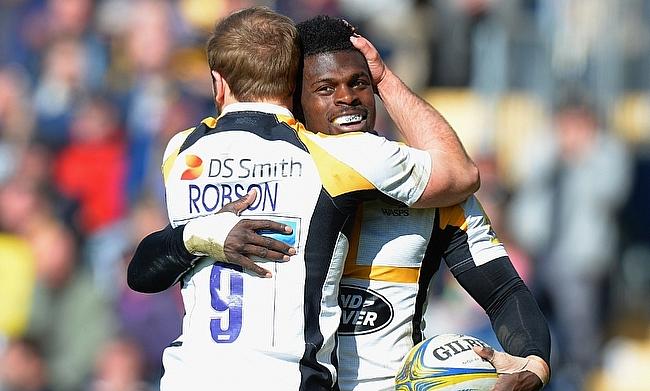 Dai Young does not expect Christian Wade, pictured, to go be part of the Rio Olympics
©PA

Christian Wade bags 6 on his 100th appearance for Wasps
Christian Wade grabs six tries as Wasps beat Worcester in a high-scoring thriller
Jimmy Gopperth: Winning kick is something I will never forget
Last-minute Gopperth kick sends Wasps through to the Champions Cup semi-finals

The Olympic dream is "not really an option" for Christian Wade unless Team GB bosses actively seek the in-form Wasps wing's services, according to Dai Young.

Wade grabbed an Aviva Premiership record-equalling six tries in Wasps' 54-35 win at Worcester on Saturday, the 24-year-old offering a reminder of his deadly finishing abilities ahead of a landmark summer for rugby.

Rugby Sevens will make its Olympic debut in Rio in August, but Wasps rugby director Young has had no contact from Team GB coach Simon Amor about the availability of any of his players.

Wade has just one full England cap to his name, but Young hopes the arch finisher could yet trouble Eddie Jones' selection for the summer tour to Australia for the 15-a-side format.

"We've had no communication on anybody at Wasps yet," Young said when quizzed on whether Wade could be heading to the Olympics.

"The reality is that he and Joe Simpson are both 15-a-side players for us.

"It's a great experience playing Sevens and both have played Sevens previously.

"We'd need to have all the details before we could say anything about it really.

"But we've had no information on whether that's an option, and as far as we're concerned it's not really an option - it hasn't been discussed.

"They are 15s players. That's the reality of it until we know any different."

England head coach Jones has already admitted he will not shy away from making changes to the squad that sealed the RBS 6 Nations Grand Slam ahead of June's three-Test tour to Australia.

And Young has urged the England boss to have a close look at Wade for that summer challenge against Michael Cheika's Wallabies.

"I'm really pleased for him. He's threatened to do something like that in the last couple of months," Young said of Wade's six-try haul against Worcester.

"When you expect him to score, he'll score. Put him into space and he'll score, without a shadow of a doubt.

"But he's also shown on numerous times that he doesn't need space.

"Sometimes he shouldn't score and he still finds a way.

"I wouldn't swap him for anybody.

"As far as I'm concerned he's right up there with the best of them and I'm hoping Eddie (Jones) will have another look at him and he'll be somewhere in the summer because he's got that quality that he should be involved on the big stages."