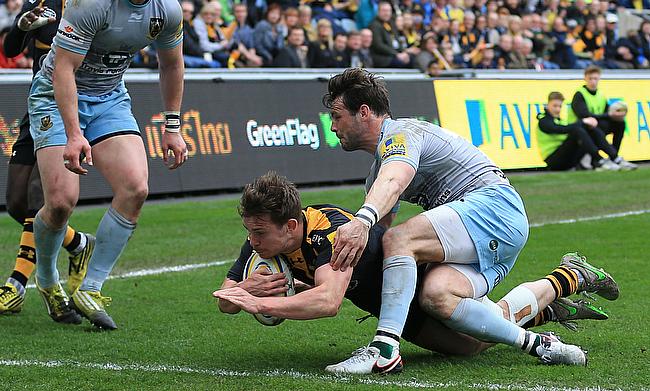 The duo combined to score a try either side of half-time in a scrappy encounter at the Ricoh Arena that keeps the Coventry-based club snapping at the heels of second-placed Exeter in search of a home semi-final.

On each occasion Smith, an openside operating as a playmaker, used his guile to create the openings in Northampton's defence that man of the match Miller exploited by running clever lines over the whitewash.

It was another virtuoso performance from Smith, the former Australia openside who is among the leading contenders to be crowned Premiership player of the year in what will be his one and only season in English club rugby before heading back to Japan.

With three matches of the regular season remaining, Wasps are all but certain of finishing in the top four while Northampton's hopes of a play-off place are looking increasingly bleak.

The match was marred by significant head injuries to two Saints players with prop Kieran Brookes and replacement scrum-half Lee Dickson having their afternoons ended by accidental collisions.

Neither was able to return and must undergo the return-to-play protocols for concussion ahead of Saturday's Champions Cup quarter-final against Saracens.

Northampton, who were without their concussed England captain Dylan Hartley once more, drew first blood through a Stephen Myler penalty, but they soon came under heavy pressure with a slippery run from Elliot Daly the prelude to Miller being held up over the line.

Miller should have fed the support outside him, thereby guaranteeing a try, and Wasps were left to rue the missed chance as a five-metre scrum and two attacking line-outs later they still had not scored.

Saints staged their own attack that was interrupted when England prop Brookes wobbled off after being knocked unconscious by the knee of Ashley Johnson.

They continued to press with centre Harry Mallinder forcing a big hole, but Wasps staged a devastating counter that started when wing Frank Halai plucked a high kick from the air.

Smith took the ball on with a sidestep sweeping him clear and once Thomas Young had been found to give the move fresh legs, Miller arrived on the angle to cross under the posts.

Wasps almost produced a second try as the half neared its conclusion, but Craig Hampson's break was ruined by a poor pass from Joe Launchbury, who gave the ball to Ken Pisi instead of one of his team-mates queuing up to score outside him.

The lead was extended to 10 points when Daly landed a penalty from inside his own half, but Myler replied in kind.

A low quality match continued to plot a scrappy course and Northampton's victory hopes suffered when Dickson had to be helped off after being clattered by Daly.

Wasps came under pressure after Saints had probed the right wing through Courtney Lawes, but Hughes broke from the scrum and kicked ahead to put his title hopefuls back on the front foot.

Another moment of magic from Smith unlocked Northampton's defence, the former Wallabies skipper stepping sideways to take out two defenders before feeding Millar who had the gas to race over.

Daly added his second penalty from the halfway line before replacement Jamie Stevenson crossed from a five-metre scrum in the final minute.