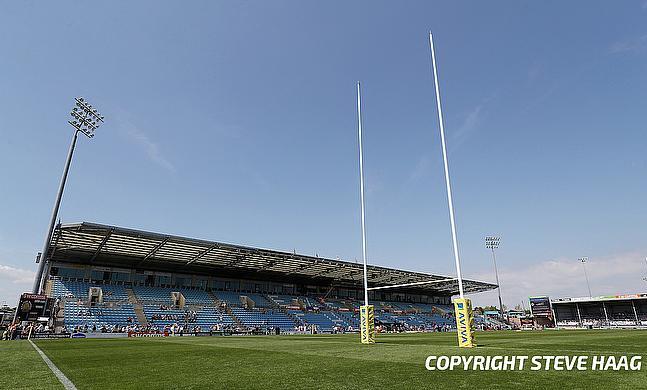 Lauren Delany: I wouldn’t be where I am today if it wasn’t for Waterloo
Darren Lamon: 'We see this opportunity as completing the Sharks family'
Sale Sharks Women sign England international Katy Daley-Mclean
Burford: We need clubs to be ambitious. We can’t sit still.

When Exeter Chiefs won promotion to the Premiership back in 2010, not even the most optimistic fan on the terraces of Sandy Park could have imagined the journey their club has been on.

Rob Baxter’s side have now featured in the last four Premiership finals, with the most famous day in Chiefs history coming in 2017 when the boot of Gareth Steenson clinched Exeter’s maiden top flight title.

During the club’s development, home-grown talent such as Jack Nowell, Luke Cowan-Dickie and Henry Slade have become established England internationals and that trio, along with an ever-improving Chiefs side, were able to reignite the club’s intentions on the European stage this season following an excellent Heineken Champions Cup campaign.

Exeter topped their pool with minimal fuss to set-up a quarter-final with Northampton Saints whilst in the Gallagher Premiership, the Chiefs currently lead the way. Any success they may achieve this term has been put on hold due to the coronavirus pandemic, but even without gracing the turf at Sandy Park, the club have still been able to continue their evolution.

At the beginning of the month, the RFU confirmed Exeter’s place in the Tyrrells Premier 15s for the next three years meaning the Chiefs will now have an elite women’s side competing in the top division.

"This represents another huge milestone in the history of our great club."@ExeterChiefs chief executive Tony Rowe has spoken of his joy after confirmation the women's team had been accepted into league ??

“We are really excited,” head coach Susie Appleby told TRU. “We have been putting together our full-time programme for a while so actually, it was pretty much a huge relief to get accepted into the league otherwise that work which we have had to do over the last six months would have all been in vain!

“Obviously, it was a relief for about five minutes but now we know the hard work really begins! We have all the infrastructure here and there is amazing support from Exeter Chiefs as a club both on and off the field from the marketing guys upstairs to Rob Baxter and his coaching team. They are unbelievable. It is like nothing I have ever experienced so the whole thing is just incredibly exciting.”

Back in September, Appleby confirmed she would be taking on a new challenge with Exeter which meant her five-year stay with Gloucester-Hartpury came to a conclusion at the beginning of this year.

The former England international helped build the club into a flourishing institution and whilst Appleby admits she will have to go through similar processes to help the Chiefs become successful, the ambition of Exeter was too good to turn down.

“You do have to take risks in your life and this was a calculated risk,” added Appleby. “I had lots of conversations with Rob Baxter who is just an incredible chap and I had visited the club so as a family, we did feel like it was worth taking the risk.

“We knew what we were getting into. It is a fabulous club with the ambition I was looking to be a part of. I had a fantastic time at Gloucester. I have done exactly the same job as we set that club up from nothing, but it is a very different club because it is an institution.

“Moving from an institution where I had to run the university programme, oversee the junior programme and obviously head up the senior programme to now joining Exeter Chiefs, is different because Exeter is very much a rugby club. I am excited to see what the differences are.”

Exeter are not the only newly-formed side who will be taking their first steps into the Tyrrells Premier 15s competition next season. Sale Sharks have also followed suit and both Premiership clubs have been keen to emphasise their support for the growth of the women’s game.

From an Exeter perspective, Baxter, along with chief executive and chairman Tony Rowe, have reiterated their commitment to the women’s programme headed up by Appleby and Amy Garnett and it is believed Exeter have already spent around £500,000 in setting up its women’s team with further investment now likely after their place in the Tyrrells Premier 15s was confirmed.

Links between women’s sides and men’s Premiership teams are seemingly becoming stronger and that relationship and support is a key aspect for Appleby.

She added: “The ability to share resources with the men’s side is massive. Myself and Amy have been immersing ourselves in Rob’s rugby programme to see how they do it.

“The most endearing thing Rob said to me which was so refreshing to hear from one of the best Director of Rugby’s in the world, never mind the country, was ‘Susie, I just have to say to you that this has been one of the most exhilarating processes!’

“He said about how he had developed players and the journey he had been on with Exeter Chiefs, but he had never worked with a women’s team and he said it is the next level for this club.

“It is wonderful to hear Rob say these things and the whole of his staff are unbelievable. I cannot praise the club enough. It is real now because we are in, but the next step is the challenge. Let’s see if we can make this club perform.”

Appleby alludes to the ‘next steps’ and included in the club’s immediate future is the recruitment of players for Exeter’s new-look squad.

The Chiefs head coach revealed a number of conversations with players were already ongoing before the club’s place in the Tyrrells Premier 15s was confirmed and Exeter have also been casting their eye over talent from abroad to include in their plans.

However, the club are keen to source local talent and developing players from the South West who can be part of Exeter’s journey over the next few years. Links with the universities in Exeter and Plymouth, as well as offering rugby apprenticeships at local colleges, are a major part of the programme whilst forming relationships with clubs such as Plymouth Albion and Cullompton is also vital.

“Ultimately we want to grow our own players like the men have done and that is why Exeter Chiefs is so successful,” Appleby said.

“Your likes of Jack Nowell; a lot of those boys are local, born and bred. They have come through the academy and now they are playing first team rugby. They never want to leave Chiefs because why would you? We want to very much emulate what they have achieved.

?? - @ExeterChiefs DoR Rob Baxter says the hard work put in by staff at the club was rewarded with the decision to grant the new women's team a place in the @Premier15s competition next season ??https://t.co/mTCMzyx4PY pic.twitter.com/Q8Dvs41s1x

“It is going to take some time. We haven’t got as much local talent straight away as we need in order to be competitive, but as the second year evolves and the third year evolves, we hope that we have had time to invest in those young players which we have been able to discover because rugby is right there on their doorstep.”

For now, Appleby describes the next few months like ‘piecing a jigsaw together’. Player recruitment is a process which may not be fully completed by the time pre-season begins due to the Covid-19 pandemic, but nevertheless, the excitement surrounding Exeter is palpable.

The Devonshire city gave us a taste of their support for the women’s game last November when England defeated France at Sandy Park in front of nearly 10,000 people and Appleby hopes Exeter can add to the Chiefs’ success story.

“There are still some unknown bits around the rugby recruitment and as a coaching team, we are setting up Zoom calls to make sure we are doing the work now so we don’t have to waste time when we are back on the ground,” said Appleby. “We have that detail in our programme and what it is going to look like so we are almost ahead of the game.

“There is work that can be done and we are constantly educating ourselves! There is a lot of stuff for us to focus on and it is going to be a busy a time, but when we actually get to Sandy Park and back on the ground, that is the really exciting part. Everyone is desperate to get going. It is like a jigsaw and once you have put one piece in, you are trying to find the next and correct piece to fit the equation so it is exciting.”