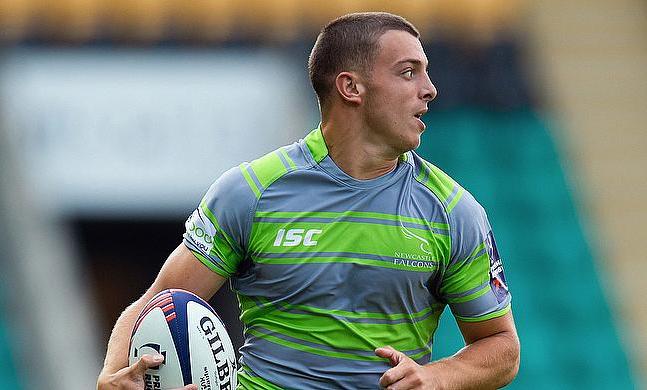 Scoring three tries against Canada at Twickenham, Radwan showed all of the attributes that had helped him catch the eye of Eddie Jones in the first place. Never having pulled on an England shirt at age-grade level, Radwan scored seven tries in an injury disrupted 2020/21 Premiership Rugby campaign.

Whether or not any Newcastle Falcons players would even be picked up this Summer was questioned even in May, Head Coach Dave Walder suggesting that the club was being ignored, with no representatives from England making their way to Kingston Park to watch the team in action.

Tipping George McGuigan, Sean Robinson, Will Welch, Luther Burrell and Adam Radwan for selection at that time, four players have gained caps in these past two weeks. Jamie Blamire has scored four tries across his two selections, Callum Chick started against the USA and Trevor Davison came off the bench in the summer’s first test.

Radwan was the final Falcon to get his chance and very much took the opportunity presented to him. Looking electric with every touch of the ball, the 23-year-old rushed past his opposition with apparent ease, scoring three tries against Canada.

After an extremely promising debut in Saturday, attentions have already turned to this Autumn, the brief taste of life in England camp whetting the appetite for more experiences at Test level.

“It has given me a massive taste for it,” Radwan said. “I mean, I have never done any of the England age-grade stuff, so to come in and get a taste of it, it blew my mind.

This season, along with fellow Newcastle wing Ben Stevenson, Radwan established himself as a Premiership regular. The pair formed quite the tandem, performing well in both attack and defence, helping the side to the top four before a downturn in form meant that the side placed 10th at the conclusion of the season.

It has been quite the journey for Radwan in recent years, the back three player having been released by his club’s academy at the age of 18. Returning to Billingham RFC for a season, he was back in the fray on a full-time basis just a year later.

In the seasons that have followed, he was awarded the Anglo-Welsh Cup Breakthrough Player Award, was the top try scorer in the Challenge Cup. Following the club’s relegation to the Championship in 2019, Radwan established himself as a regular under Dean Richards, taking his form from the second division into the topflight.

It is one of several massively unique stories in this current crop of England players, when asked about the work that has gone into his career so far, it is a journey that Radwan says he has enjoyed every step of.

The first man to score a hat-trick for England on debut since @JeremyGuscott in 1989 ??

“I work extremely hard,” Radwan said, “like everyone does here and I was actually sat on the bus thinking on the way here this morning, wow. It is something you always dream of and it just feels like time has flown by.

“It really has, and it feels like only yesterday I was here watching England as a kid and that time has absolutely flown by and I have loved every minute of it.

“The highs, the lows, I think all of them have contributed to me then ending up back here and playing. It was an amazing day and one I have been working for, for a long time.”

Whilst the game will be remembered fondly for Radwan and Blamire scoring a hat-trick each, it will be Marcus Smith’s mid-game recruitment to the British and Irish Lions that shall be the stand-out moment of England’s 70-14 victory over Canada.

Having played against the Harlequins fly-half over a number of years, this has been Radwan’s first opportunity to play with a man widely considered as one of the best young talents in rugby, the wing offering plenty of praise to his international teammate.

“He seems to be always making the right decisions always putting people through holes. He makes it look effortless and he’s unbelievable and he is a real top boy. I have got on with him really well and I am so pleased for him.”

Unlike the majority of his new England teammates, Radwan hasn’t had to deal with back-to-back seasons, Newcastle having a seven month wait before returning to competitive competition.

Regardless of that, it has still been a gruelling season for the 23-year-old and his teammates on Tyneside. With some well earnt time off coming up, Radwan is unsure if his holidays will be in Whitley Bay or somewhere further afield and is looking forward to the challenge of gaining more caps in the near future.

“It has been a tough year,” Radwan said. “Not just rugby stuff, Covid stuff, everyone all over the world has been struggling. It will be nice to switch off and have some time off from rugby and from everything, so I will probably have a couple of weeks off and then and then get back into it.

“I can’t switch off now, it is one cap, and I would like to get a lot more really. So, I will have a couple of weeks off and get straight back on it.”