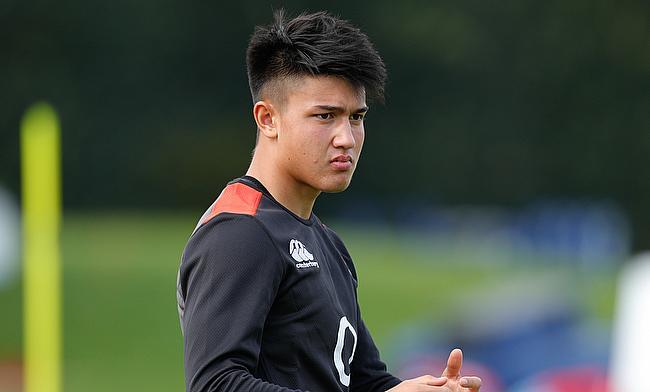 Just as he did last weekend, Marcus Smith sits in front of a computer, flushed after being another of England’s key performers at Twickenham, although today was a little different.

It was just after half-time that the news started to trickle out that the Harlequins fly-half had been called up by Warren Gatland to represent the British and Irish Lions.

Seemingly the decision all hinged on the fitness of Finn Russell, the Scotsman suffering from an Achilles injury that won’t keep him out of the Springbok tests, meaning he had to pull out of the team’s 31-71 victory over the Sharks, but an injury that will leave the Lions short of depth over the next couple of weeks in South Africa.

As a precursor to his time in front of the media, we are all told to be quick. Time is of the essence after all.

“I am lost for words,” Smith said, “I can’t believe what is going on. To play for England a second time is special, and a day I will never forget and then I got pulled down the tunnel, I thought I was in trouble.

“Then, Charlotte and Richard Hill gave me the good news. I was shaking and I don’t really know what to say.”

Kicking all of his points today, Smith looked assured in an England shirt once more, guiding England to a 70-14 victory over Canada beneath overcast London skies.

Having scarcely left school when the Lions toured New Zealand in 2017, if you had to describe the 22-year-olds season, you’d quite rightly call it a fairy-tale.

Taking Quins to a Premiership victory, to then gain his first cap for England and on the day of his second, to be selected for the Lions, it is indicative of the potential Smith has. In 2017, Ugo Monye predicted that Smith would make his debut within a year of his Quins debut and whilst it may have come a little later, there is no question the fly-half is ready.

Perhaps what Monye would have been unable to predict is that his partner to the Euros final tomorrow night at Wembley would be in a different hemisphere and not one of the 67,000 making their way to North London.

Smith maintains that ‘it is still coming home’, regardless of whether or not he is at the stadium and instead must focus on a new task. In a short space of time, Smith has clearly made an impression on his teammates, the group applauding him as he was interviewed by Channel 4 and catching some words of wisdom from Eddie Jones prior to stepping up to talk to the press.

“Eddie just said to go out there and enjoy it and ‘learn as much as you can and come back as a better player’,” Smith said.

Jones not only echoed exactly what Smith said later on, but also made it aware that he and his coaching staff knew that their starting fly-half would be going to South Africa several hours after his England commitments were over.

“We got info last night that he was going,” Jones said. “We felt in the best interest that we were going to inform him after the game, but out best laid plans got shot apart a bit.

“We’re pleased for him, it’s a great learning opportunity for him. He’ll play with some good players and some good teams in South Africa, it will aid his education process and speed it up a bit.”

From the moment Smith came onto the scene, it was made clear he was special. Then, after joining the Harlequins Academy, Danny Care eulogised about the man he now calls his half-back partner on a weekly basis, the question mainly coming about when the Manilla-born playmaker would take the step up to international rugby.

After two Tests, the question now becomes about whether or not Jones has an international star on his hands, the Australian quick to drive that query directly into cover.

“That’s too far ahead,” Jones said. “That’s for you guys to say. He’s played two Tests against USA and Canada, we’re pleased for his progress, we’ll continue to monitor it and if he keeps developing, he has a chance of being a good Test player for England.”

Words can’t describe how proud I am of you brother! Go be you and do your thing I can’t wait to watch you in a lions shirt ?? @MarcuSmith10 https://t.co/FGqp36hhWi

To put things somewhat mildly, it has been a whirlwind these past few weeks for a 22-year-old who still has a long career ahead of him. Trotting over to the far touchline at the conclusion of the game, Smith shared a word with Tim Lambert – who was his first ever coach, at Centaurs Rugby Club in Singapore – before heading back to the changing room, the player admits that it will take some time to digest the past few weeks.

“I still can’t believe what is going in,” Smith said. “It has all been a blur. The minute I stepped into camp, I forgot about the Quins stuff, this group of boys is special and to finish with 70 points is special.