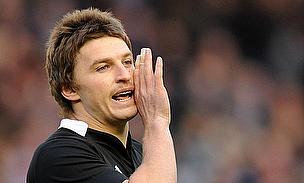 Should All Black Trials Return - Check Out These Teams!
Changes for Australia and McKenzie
The Rugby Championship - Team of Round 2
All Blacks run riot against Australia
The Gap between New Zealand and the Rest of the World Closes...
Wallabies rain on All Black's parade

No AC/DC this weekend for the AB's so it's over to BB. So AC equals Aaron Cruden and DC equals Dan Carter but is Beauden Barrett a firing BB gun?

Beauden Barrett starts at first five eighth to replace Aaron Cruden who in-turn was replacing Dan Carter in the Number 10 jersey in the All Blacks team for their Rugby Championship game against Argentina.

Barrett has predominantly been used in a bench role for the All Blacks and has usually been impressive and was one of the best first five eighths in Super Rugby for the Hurricanes. Colin Slade comes onto the bench.

Ma'a Nonu returns in the Number 12 jersey to replace the injured Ryan Crotty who replaced Nonu originally, so that is great timing.

Interestingly, Israel Dagg starts at fullback with Ben Smith moving from fullback, onto the wing. It is hard to know if this is simply because Dagg will get to play on his home ground or if it is a reflection on the form shown by Cory Jane who hasn't seen a lot of the ball on the right wing. Dagg does have a good kicking game which will be useful in the rain.

Liam Messam retains his blindside flanker job ahead of Steven Luatua, but will have his work cutout for him against the rugged Argentina pack.

I am interested in seeing how Wyatt Crockett goes against the Argentina pack who have been impressive in the Rugby Championship so far. He has a history of giving away penalties. Joe Moody is potentially a better scrummager and so he could come off the bench.

I would rather see Kerr-Barlow on the bench ahead of Perenara.

Different teams offer different challenges, but in wet conditions as forecast for Hawkes Bay on Saturday then the All Blacks forward pack will be under the spotlight from the physical Pumas pack!