Wallabies rain on All Black's parade 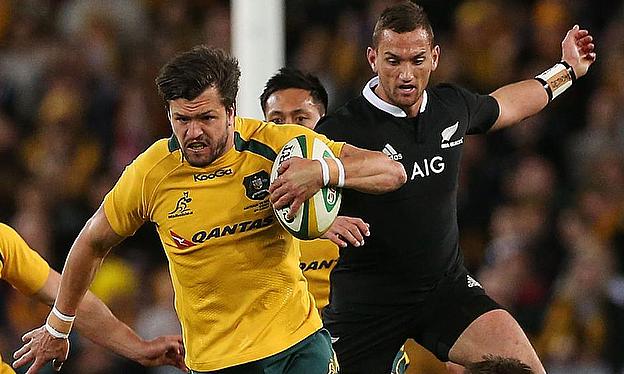 The Wallabies didn't let the rain dampen their resilience
©PA

Australia foiled New Zealand's bid to win an historic 18th consecutive Test as the Bledisloe Cup rivals played out a 12-12 stalemate at the ANZ Stadium.

Steve Hansen's World Cup holders were heavy favourites to book their place in the history books and get their Rugby Championship campaign started with a win, but Australia maintained their recent resurgence to spoil the party.

Under coach Ewen McKenzie the Wallabies were chasing an eighth consecutive win of their own and, although they rode their luck at times, they put consistent pressure on the All Blacks in slippery conditions.

Kurtley Beale, given the nod at fly-half for the hosts, and Aaron Cruden kicked four penalties apiece to set up a tasty return clash next week.

Things looked very different early on when th e Wallabies, boasting seven players from Super Rugby champions the NSW Waratahs in their starting XV, were pushed on to the back foot almost immediately.

It was hardly surprising when the early pressure led to a penalty and Scott Fardy was the guilty party at the breakdown as Cruden, who continued at fly-half despite calls for Beauden Barrett to start, slotted home to give the visitors a 3-0 lead after four minutes.

It could have been even worse for the Wallabies soon after as Aaron Smith pounced on a spill from Beale, but in greasy conditions Dan Coles fumbled his offload just short of the line.

Beale kicked over a penalty of his own after a rare foray forward by the Wallabies, but Cruden then restored the All Blacks' three-point cushion before splitting the posts again to make it 9-3 as Australia's scrum began to creak.

The maverick nature of Beale inspired a late first-half flurry from the hosts and a series of frenzied phases led to prop Wyatt Crockett being sent to the sin bin for repeated All Black infringing at the breakdown.

Beale played for territory as the Wallabies pushed for a try, but he then hit the post with a subsequent penalty attempt as the visitors just about kept their six-point lead at the break.

The Waratahs man did reduce the arrears to three shortly before Crockett returned in the second-half, and he and Cruden then traded penalties to make it 12-9 on the hour-mark.

With 10 minutes left on the clock the momentum switched to the Wallabies and, with substitute Barrett sent to the bin for a professional foul, Beale kicked his side level with his final act of the day before being replaced by club team-mate Bernard Foley.

Although the 14-men All Blacks desperately tried to find a way to get the win in the closing stages it was Australia , who have not won the Bledisloe Cup since 2002, fell just short of nicking it at the end themselves.