Ollie Phillips: 'Doddie is an amazing man - what he and his family are going through is unimaginable' 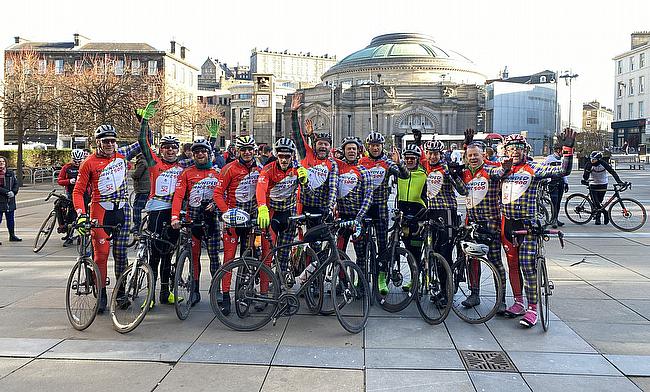 Maths student Williamson counting on a better age-grade Six Nations in 2022
Cockerill had a “massive impact” on Ritchie’s career, now back-row wants to put one over on former mentor
“We need to work incredibly hard” – Scotland on achieving their potential
“We are doing it for Doddie”: Lions Trek kicks-off big weekend

The Six Nations weekend fixtures begin on Saturday in Cardiff when Wales take on Scotland at the Principality Stadium, but the fundraising part of round two starts on Thursday morning at BT Murrayfield.

The My Name'5 Doddie Foundation - launched by former Scotland and British & Irish Lions second-row Doddie Weir - has ploughed £6.5m into MND research over the last four years, supporting the hope that a breakthrough in treatment for motor neuron disease will be just around the corner.

To that end, on Thursday at 10am, a group of over 100 cyclists - including elite names from the sport of rugby union such as ex-Scotland caps Duncan Hodge, Carl Hogg, Craig Joiner and former Wales players Colin Charvis, Alix Popham and Ian Gough - will begin the ride from Edinburgh to Cardiff in 48 hours in order to raise money and awareness for Weir and his incredible foundation.

Those involved split into teams of four and are led by former Scotland and Lions back-row Rob Wainwright. They will aim to complete the challenge in 50 hours and will cover over 500 miles in the process, hence the Doddie Cup 500 title.

One of the teams on the ride will be 'The Wheel Deal' which was due to be made up of Ollie Phillips, ex-Wasps and Harlequins man Paul Volley, John Hall who is president of Bath RFC and Tom Leefe, a business owner and brain tumour survivor.

However on Wednesday morning, Covid-19 unfortunately scuppered Phillips' chances of taking part in the cycle, but he will be attempting to complete the challenge (515 miles in 48 hours) from his static bike once he is well enough.

Desperately disappointed to announce that my chances of taking part in the Doddie Cup 500 as part of team The Wheel Deal, have been scuppered by one little red line.
??
It has been amazing to be a part of such a special group of in…https://t.co/MJEIhSFViG https://t.co/HhsZ2uEx8A

Phillips, the former England Sevens captain who now runs Optimist Performance (a company which helps businesses build a culture to succeed) told TRU: "I don’t know if you are ever ready for a challenge like this, a lot will happen in 48 hours, but you have to dig in and slog it out and it is for a great cause.

“Doddie Weir is such an amazing man, what he and his family are going through is unimaginable, yet they have all been so positive over the last few years and the money he has raised through his foundation has been amazing.

“Guys like him and Rob Burrow have really raised awareness of MND amongst the rugby community and further afield and what was a real eye-opener is just how many people this terrible disease impacts.

“If we can help raise a bit of awareness and money in the next few days to help via the cycle then that is great – no doubt Doddie will be there at the start line on Thursday laughing at everyone in their lycra!”

All the talk north of the border in recent days has been about whether Scotland can build on their opening weekend win over England in a stadium where they have not tasted success for 20 years.

In fact, Scotland have lost the last 10 times in Cardiff, eight in the Six Nations and two other matches, but they did win in Llanelli in 2020.

“I really do think Scotland can back up the win over England down in Cardiff,” Phillips said. “Wales looked a poor team against Ireland and were devoid of any ideas or cutting edge in attack.

“Scotland showed that they can weather the storm and play under the cosh in games. England had the lion’s share of possession and territory and looking at all of the statistics they should have won the game, but you have to applaud the resilience and bravery of the Scots and admire the genius of Finn Russell.

“It takes serious guts to do what he did [the double kick move that led to the penalty try and Luke Cowan-Dickie’s yellow card].

“Putting the boot to ball obviously always has risk, so you have to be brave and courageous to try such a thing, but also you need to be so skilful to execute it under pressure.

“He is a mercurial talent, we all know that, but it was the accuracy with which he pulled it off that really impressed me. Scotland are a totally different side with him on form.

“I think it will be close in Cardiff. Wales are always better on home turf, I imagine they will re-visit the Josh Adams at 13 experiment and there will be a response, but Scotland should be feeling confident.”

France v Ireland: “They are the two best teams in the tournament”

The two teams who looked to have slipped into top gear straight away in the Six Nations were France and Ireland as they disposed of Italy and Wales with bonus points.

They meet in Paris (4.45pm UK time, Saturday) and it is a mouth-watering prospect.

“They are the two best teams in the tournament and it is a shame this game is being played so early in proceedings because, for me, this is a sort of championship decider,” Phillips states.

“France took a bit of time to get going before they hit their straps against Italy, but they have quality throughout the squad while Ireland were very impressive against Wales.

“They have got to go to France though and that is a tough ask for any team, but the way Ireland attacked and the way their backs interlinked and seemed to be on the same wavelength last weekend was very good.

“Someone like Mack Hansen coming in on the wing has just added to Ireland’s attacking stocks and this should be a very good game.”

Talk of Hansen, the Irish winger who had a stunning debut, brings us nicely on to England's own attack which has been in sharp focus in recent days.

Head coach Eddie Jones reckons his team left 15 points ‘out there’ at BT Murrayfield last weekend and when they were 17-10 up, it looked like they would go on and finish the job.

They didn’t, which makes a comfortable - and entertaining - victory in Rome a must in round two (3pm UK time, Sunday).

“It was definitely one that got away from England last weekend,” Phillips said. “In recent times it has been a criticism sent England’s way often that they have so much talent, but just lack that cutting edge in attack.

“The lines that Ireland run, they are really precise and cut-throat whereas Scotland were clinical when given a chance. England on the other hand had loads of possession and opportunities but did not do enough with them.

“I think they will win comfortably in Italy and Eddie Jones will be glad to have this game next to really smarten up on things. The players just need a bit more freedom to play.”