“We are doing it for Doddie”: Lions Trek kicks-off big weekend 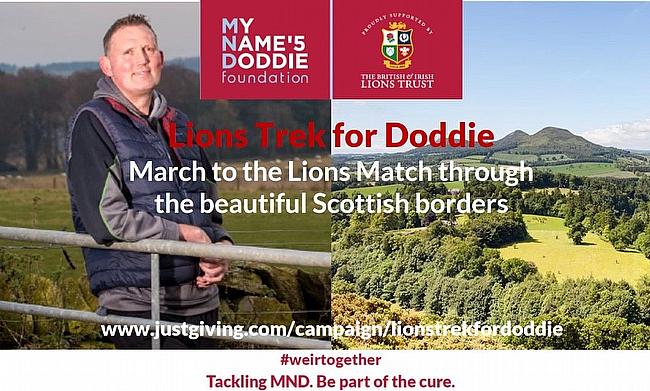 When you read this article on Friday, the excitement ahead of the Vodafone Lions 1888 Cup clash between the British & Irish Lions and Japan will be continuing to build.

On Saturday, 16,500 lucky spectators will be at BT Murrayfield in Edinburgh to see Warren Gatland’s men play the first Lions ‘home’ match since 2005.

It promises to be a cracker as the squad look to set themselves up for the trip to South Africa with a victory, but before the current players get a chance to show what they can do on the pitch, some former top-level players from these shores are taking on their own challenge on Friday.

A team of nearly 60 fundraisers, led by Kenny Logan who earned 70 caps for Scotland between 1992 and 2003, are taking part in a 35-mile trek across the spectacular Scottish Borders from Galashiels to Murrayfield, arriving this evening to deliver the match ball.

The trekkers will experience heather-clad rolling hills, miles of forests and woodland, lochs and rivers while the area is criss-crossed by a multitude of fantastic routes, so it will certainly be a journey to remember.

And they are doing it all to raise money and awareness for the My Name’5 Doddie Foundation and their old pal Doddie Weir, of course himself a Lions tourist to South Africa in 1997, who is now living with Motor Neuron Disease.

“The challenge is going to be tough and there might be a few blisters on the feet by Friday evening, but we are all doing it for Doddie because we love the big man and the trek that we are taking on is nothing compared to the challenges which he and other people with MND suffer every single day,” Logan, now 49, told TRU.

“To watch what he has been through in the last four years and the courage he has shown since his diagnosis has been nothing short of inspirational.

“The fundraising he and the Foundation have done too has been amazing and if we can play just a small part with this trek then that is excellent.

“Former Lions like Rob Wainwright, Simon Shaw and Andy Nicol are involved as well as former Scotland second-row Stuart Grimes while we have a lot of others from the rugby world taking part and explorer Jason Fox will be leading the way, so he may just be a tad fitter than the rest of us!

“It is going to be really nice to spend time with everyone on Friday and I am sure that will help numb the pain of walking so far while we are also going to be seeing Doddie at some point along the way so that will give us a big boost no doubt.”

Logan is one of the people who has been fortunate enough to get a ticket to the first Lions match in Britain for 16 years, with a late Jonny Wilkinson penalty earning the team a 25-25 draw with Argentina in Cardiff that day.

“It is going to be amazing to see the Lions at Murrayfield,” Logan states.

“It is also going to be so good just to see a crowd in a stadium again while Japan are a strong side which should mean that it is a good game and a strong test for Warren Gatland’s side before they head off to South Africa.

“From a Scottish point of view, it has been frustrating to see Hamish Watson and then Zander Fagerson have to drop out of the starting XV this week, but there is no point in taking any risks ahead of a long tour and Rory Sutherland, Duhan van der Merwe and Ali Price are still flying the flag for the Scots in the matchday 23.”

As a former wide man himself, Logan has watched the rise and rise of Worcester Warriors-bound van der Merwe with interest and believes the big South African-born player can make a difference in the coming weeks.

“He is such a strong runner with ball in hand and when he hits the right line, he is difficult to stop,” Logan explains.

“At times in the Six Nations his positioning and defence was perhaps not the best, but he will have been working on that with the Lions coaching team I am sure.

“To have eight Scots going on the tour is exciting and I think that they all have a chance to push for a place in the Test match 23 because they have been in-form with their country and they will have taken confidence from that.”

At time of writing, the ‘Lions Trek for Doddie’ team have raised nearly £138,000 - get involved via www.justgiving.com/campaign/lionstrekfordoddie