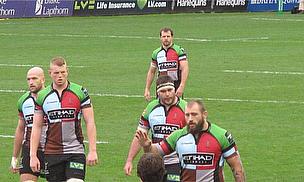 The second weekend in December saw a return to the Heineken Cup, now with the Autumn Internationals no more than a distant memory, Europe’s top domestic teams clashed in the competition’s third round of fixtures.

The round got underway on Friday night with just two teams in action.

First, Welsh side Ospreys travelled across the English Chanel to face Castres in France.

The Welsh side remain still without a victory in the Heineken Cup following a 15-9 defeat at Stade Pierre Antoine.

Much of the action occurred in second-half injury time with Ospreys on the attack, although the Welsh side were unable to score that crucial try.

It proved a goal-kicking duel in France with Rory Kockott slotting home five penalties while the visitors could only muster three.

Dan Biggar twice put the RaboDirect PRO12 side ahead in the first half and while he also scored late on it was not enough to prevent defeat.

Castres had two numerical advantages during the game following yellow cards to Aisea Natoga and Sam Lewis but they failed to press home their advantage.

In the evening’s other game the Cardiff Blues welcomed Glasgow to Arms Park and emerged victorious over the Scottish side with a 29-20 final score.

The Welsh side claimed the top spot in Pool 2, following on from the Friday night win.

A young and much-changed Blues side came into the match as underdogs but played with verve and precision to see off the visitors from Scotland.

Saturday, and the start of the weekend, saw the main selection of Heineken Cup matches with 12 teams in action around Europe.

One of the first kick-offs was in the English West Country as Exeter welcomed reigning Champions and French Galacticos Toulon to Sandy Park.

The fixture was a superb game of rugby as the defending champions claimed a precious close fought 14-9 away win.

The result is only Toulon's second win away from home - in all competitions - this season but moves them to the top of Pool 2, one point clear of Cardiff Blues.

Toulon scored the only try of the game - via loosehead prop Florian Fresia - but it was the English minnows who led 9-8 at the interval.

The visitors got the job done though with a Matt Giteau penalty and a late drop from Wilkinson securing the four points.

Elsewhere, Premiership leaders Saracens recorded a comfortable 39-10 away victory at Zebre, thanks to a Chris Ashton brace of tries.

Three tries in the first half laid the platform as Saracens cruised to a comfortable victory over Zebre in Pool 3.

Sarries made the trip to Italy in tremendous form, and having edged out Sale a week earlier, while the Italian hosts had been stuck in a rut. And the game reflected the form book as the visitors dominated the contest from start to finish.

Saracens wasted little time in establishing an advantage. Charlie Hodgson booted over a penalty, before George Kruis went over for Hodgson to convert and put the visitors ten points up within the first 15 minutes.

Also, Northampton suffered a crushing 7-40 defeat at home to Leinster, in a replica fixture of the competition’s 2011 final.

Luke Fitzgerald scored a hat-trick as the Irish side ran in six tries to hammer the Saints at Franklins Gardens.

Brian O'Driscoll played a starring role for the visitors, creating the opening two scores for Fitzgerald in a humiliating evening for Saints that saw them concede the bonus point as early as the 37th minute.

Jamie Heaslip and Eoin Reddan also crossed in the first half as Leinster issued a statement of intent in their quest to claim a fourth Heineken Cup crown.

They led 26-0 at half-time in the first meeting between the teams since the 2011 final and the rout continued after the interval with O'Driscoll, playing his first Heineken Cup match of the season, and Fitzgerald adding further tries.

Elsewhere on the day, Clermont beat the Scarlets 32-11 in France; Harlequins recorded a 32-8 away win at Racing Metro and Ulster cruised past Treviso 48-0.

Sunday’s Heineken Cup action stood out from the rest of the round with three of the best games of the weekend.

The first to kick off was in Ireland as Munster cruised to a 36-8 victory over Perpignan.

The two-time champions of Europe broke the deadlock after just two minutes as they eased to a 22-0 advantage by the break, leaving them another half to try and cross again to clinch a crucial bonus point.

They had to wait until the 65th minute to get it, their pack pushing to such an extent that Perpignan were eventually forced to give away a penalty try.

James Coughlan added a fifth in the dying stages before Perpignan had the last word, Joffrey Michel bagging a consolation just before the final whistle.

Also, in a real thriller at Welford Road, Premiership Champions Leicester fought to a 41-32 bonus-point victory over Montpellier, in the game of the round.

Three converted tries in the opening 14 minutes, two from Miles Benjamin, guaranteed that Leicester were always in control of the contest, although the spirited French outfit ensured they could never quite relax and gained deserved reward for their endeavour with a losing bonus-point having matched their hosts with four tries.

Niki Goneva got Leicester's opening try and Jamie Gibson crossed to secure the Tigers a bonus point of their own on the hour, while Mamuka Gorgodze, Timoci Nagusa and Pierre Berard (two) all touched down for Montpellier.

The visitors did look poised to claim two bonus points, but an opportunistic last-gasp drop-goal from Ryan Lamb took Leicester nine clear to deny them at the last.

Elsewhere, Connacht earned the most famous win in their history as they stunned three-times Champions Toulouse in Sunday's Heineken Cup Pool 3 clash.

Connacht went into the game after four straight defeats - including last weekend's 43-10 Pro12 mauling by Edinburgh which led to coach Pat Lam apologising to the club's supporters for an "unacceptable display".

Toulouse were unbeaten in the Heineken Cup at the Stade Ernest Wallon for five years and the Irish province were also up against a club whose reputed £25m-plus player budget is reckoned to be more than 10 times greater than Lam's squad.

Dan Parks kicked six first-half points to put Connacht ahead but Jean-Pascal Barraque's try and conversion just before the break put Toulouse 7-6 up.

However, another Parks penalty was then followed by a try by the superb Kieran Marmion which the Scot converted.

Thierry Dusautoir's try, converted by Lionel Beauxis, left only two between the teams but Connacht held on.

The shock win keeps Connacht in contention for qualification from Pool Three as they move to within one point of the joint table-toppers Saracens and the French club.

Finally in the fourth game of the day Gloucester beat Edinburgh 23-12 away from home.

All of the sides are in action once again this coming weekend, with 12 fixtures in the fourth round of the competition.