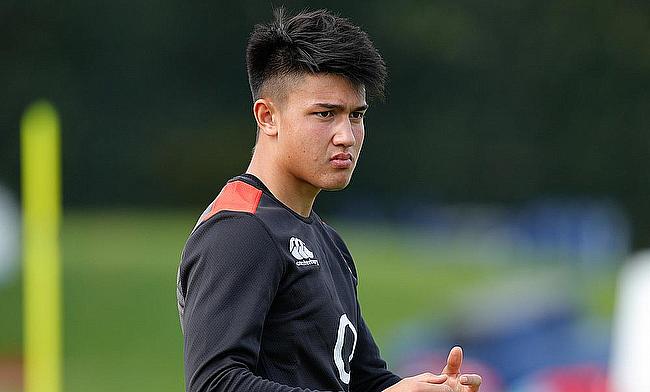 Marcus Smith: Manu Tuilagi, Jonny Wilkinson and the Smith family
Marcus Smith has desire to be 'one of the best No 10s in the world' - Eddie Jones
Win against Cardiff was a 'massive relief' - Harlequins fly-half Marcus Smith
Luc Smith Interview: The younger brother of Marcus plying his trade in National One

It was one of those afternoons which suited Marcus Smith down to the ground.

After experiencing the cut and thrust of a first Six Nations campaign with England, the Harlequins fly-half returned to his club duties last weekend as the champions produced a dazzling display to beat London Irish 41-14.

Quins certainly enjoyed themselves against their near neighbours as they strengthened their play-off bid, and it was clear Smith was thriving in his usual surroundings of the Premiership.

The No.10 was one of very few shining lights for England in the recent Six Nations as Eddie Jones' side fell way short of expectations and whilst the 23-year-old is now focused on collecting more silverware at club level, he admitted he learnt a great deal from his time in the international set-up.

“I learned a lot from playing in high-pressure environments like away at Murrayfield and away in France," Smith said. "They were both tough places to go and I learned a lot of lessons about myself personally, as well as how we can improve as a group.

"You get a lot of stick as an English player going to Murrayfield and I realised that maybe I was a bit naive going there thinking it would be plain sailing. It was a tough Test match.

Sensational from Marcus Smith ??@Harlequins take the lead after an inch-perfect pass from their number ??

“We’re gutted that we came third, but we learned a lot as a group and as long as we improve on that, whoever gets selected for the summer tour (to Australia), and we improve on that again going into next season, we’ll put ourselves in a much better position. No-one goes on the field to lose, but I’ve learned a lot. At 70 minutes in most games we were there or thereabouts. I guess we are always looking for that perfect game and we probably didn’t get that.”

After a whirlwind 12 months or so which has seen Smith win the Premiership, represent the British and Irish Lions and become an integral part of England's future, perhaps the Six Nations was the first slight dip in his astonishing rise.

Of course, he will want to be part of Jones's plans for England's summer tour to Australia but for now, the next target for Smith is helping Quins progress to the last eight of the Heineken Champions Cup.

Tabai Matson's side travel to Montpellier on Sunday in the new-look Round of 16 and Smith is hoping Quins can take the next steps in Europe against the current Top 14 leaders.

“It’s the biggest tournament in Europe for a club player," Smith added. "Every French team treats Europe with a great deal of respect. We're expecting the best version of Montpellier and we're excited for that challenge. We're going to try to take them out of their comfort zone and throw something at them that they might not expect.

"We’re in a different place as a Quins team now. We have much greater ambitions and we don’t want to just take part, we want to win the silverware. It starts this week.

"Last year no one gave us a chance (in the Premiership), and I don’t feel people give us a chance this year. We’re third now with four games to go, we’ll try to get bonus points in all them and see where we are. At the minute, we’ll focus on getting out of the Round of 16 in Europe and that’s something Quins haven’t done for a while.”