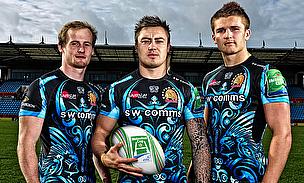 Exeter youngsters Jack Nowell and Henry Slade, both with standout performances, could not help their side to victory against reigning Heineken Cup champions Toulon at Sandy Park on Saturday.

The defending champions overturned a half-time deficit to secure a narrow win over a determined Exeter side and take top spot in Heineken Cup Pool 2.

A barrelling run from Florian Fresia put the holders ahead, but penalties from Gareth Steenson (two) and Henry Slade gave Exeter a 9-8 interval lead.

Wilkinson swept over a drop-goal before his side ground out the final minutes.

Exeter were committed in defence, exemplified by Jack Nowell's try-saving tackle on Rudi Wolf, and ran the ball gamely as they chased the game late on. But ultimately they lacked the quality to wrestle the match away from their expensively assembled opponents.

Starting wing Nowell and replacement fly-half Slade, who were members of the same England U20s setup, both starred against the reigning champions; making names for themselves on the biggest domestic stage.

Nowell, a member of the England Saxons setup, is certainly ‘one to watch’ for the future, read more about the youngsters rise to success in our Emerging Talent article here.

Before the game, Toulon, coming off the back of a shock defeat away at Cardiff in the second round of the competition, selected a star-studded line-up, which included the likes of Bryan Habana, Bakkies Botha, Mathieu Bastareaud, Drew Mitchell and Giteau alongside Wilkinson.

However, Exeter soon settled into the game, unfazed by the French side, as Steenson kicked them into an early lead.

Toulon, as ever, looked as if they could threaten at any point; though, the French giants were far from their fluent best, with basic errors halting their advances. A deft flick out of the back of the hand from former All Black second-row Ali Williams showed signs of their potential, with prop Fresia to barge over.

Early into the game the hosts lost Steenson to injury; however, it was then the turn of 20-year-old Slade who made three successful kicks from three to ensure Exeter went into the break in the lead.

The second half was a scrappy affair. With Exeter spending the first 15 minutes of the second period in their own half, they were always likely to wilt the longer the tie went on. Wilkinson though continued to struggle, missing a third penalty in succession as the home side held on.

It wasn't going Toulon's way as the TMO turned down a try after Rudi Wulf clipped the touchline in the act of going over.

Matt Giteau took over the kicking responsibilities - despite the crowd's light-hearted chants of "we want Jonny" - and split the uprights to give Toulon a narrow lead with 13 minutes left to play.

Although it never looked like Exeter would score a winning try, they put everything into the game and should get plenty of credit for a valiant performance. It was the master himself, Wilkinson, who put the final nail in the coffin with a winning drop-goal in the dying minutes.

However, during the game Toulon's season was dealt massive blow when Bryan Habana pulled up with what looked like a serious hamstring injury, which ended his European debut prematurely.

Next weekend the English Wes Country side travel over the Chanel to face Toulon again in a repeat fixture.