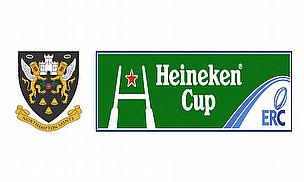 Northampton Saints cruised past the Ospreys on Sunday afternoon at Franklins Gardens, falling just short of a bonus point with a 27-16 victory.

After losing their first pool game 19-13 to Castres last weekend, Northampton were looking to kick off their Heineken Cup campaign with their first win.

The victory took the English side to second in Pool One of the competition, three points short of Leinster.

Tries from Samu Manoa and Christian Day in a Saints dominated first half took them 17-6 ahead at the break.

Ospreys responded with a try through fly half Dan Biggar, but a third Saints try from full back Ben Foden and a second penalty from Steve Myler sealed the win.

England lock forward Courtney Lawes impressed on the day with a strong performance; and showed a statement of intent for an Autumn Internationals starting jersey when Australia come to Twickenham on the 2nd of November.

The Saints just fell short of securing a bonus point, as George Pisi was held a couple of feet short of the line, but in the end they were convincing winners, over a disappointing Ospreys side filled with a number of Lions, that were second best since the first five minutes.

Standout player, Courtney Lawes, set the tone from the kick off as he thundered into scrum half Tom Habberfield after he caught the ball and the Ospreys never really seemed to recover.

Power winger George North, who, himself, could be mistaken for a second row, thundered into the Ospreys midfield defence and rewarded his side with a penalty after an Ospreys defender was deemed offside. Myler converted the three and kicked the hosts into the lead after just two minutes.

Things moved from bad to worse for the Welsh region, as some poor defending allowed Manoa to run through and over the line, seemingly unopposed, to create a 10-0 lead.

The visitors, who also needed a win after losing 19-9 to Leinster in week one, replied with successive Biggar penalties to bring the gap to just four points.

However, the scores did not remain close for long as the Saints, once again, stepped up the pressure, culminating in Christian Day crossing the whitewash from a Courtney Lawes pass, opening up a 17-6 advantage at the interval.

The Welsh region needed to score first after the turn around if they were to stand any chance of staying in the game, and they duly lifted their game.

The Ospreys managed to power their way deep into the Saints half, with Captain and leader Alun Wyn Jones being held inches short of line. However, all was not lost as Biggar eventually managed to burrow his way over the line before adding the conversion and making the score 17-13.

The Ospreys fight back did not last long, as Northampton soon came back into the ascendency through full back Foden, who crossed the whitewash for the Saints’s third try. The home pack came perilously close from a lineout catch and drive, but were held short. Scrum half Lee Dickson managed to find Foden, however, and send him through for the score.

Myler added the extras from out wide, before an exchange of penalties ended the scoring.

A final fourth try and bonus point fell just out of reach for the Saints, as they came dangerously close in the dying minutes of the game but could not convert.

Former Saints and England fly half Paul Grayson told the BBC that the "Saints had the Ospreys at arms' length from the first five minutes. I thought Ospreys were going to come and throw some shots with their big forward pack and lots of Lions in there, but they were comfortably second best in lots of departments.”

Northampton boss Jim Mallinder added to this by praising his players and particularly Courtney Lawes who “was sensational, not just in his restarts, but his defence as well”, he told BBC Sport.

"He was in and out of games a little bit in the past, now he is a complete player for the full game.

"It was a satisfying win for us. We played well and scored three really good team tries. It would have been lovely to have sneaked a bonus point at the end, but it means we are going into the back-to-back games against Leinster in December with everything to play for."

A dejected Steve Tandy of the Ospreys lamented to the BBC that "No-one has ever qualified from losing their first two games, but we will be preparing for Castres in December as if we are still involved. We need to pick up points and wins."

Northampton host Leinster at Franklins Gardens in the first of two back to back matches on Saturday the 7th of December, as the two teams battle out for the top spot of Pool One. Also, Ospreys travel to Castres for a Friday night showdown on the 6th of December.