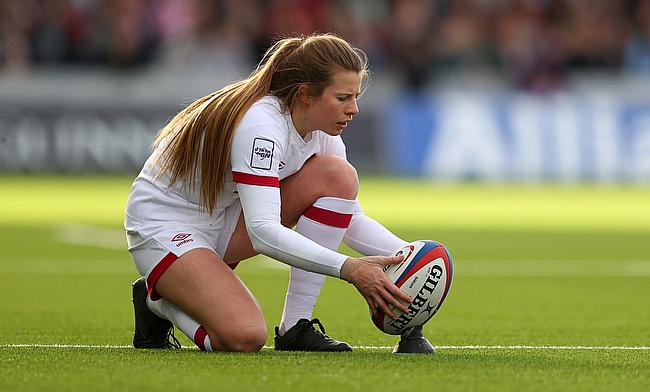 England played in front of a record 15,836 home fans for their 69-0 win over Ireland last weekend
©RFU Collection via Getty Images

After England’s 69-0 win over Ireland at Mattioli Woods Welford Road on Sunday afternoon, the Red Roses stayed on the field for nearly 90 minutes after the final whistle.

This time with their fans came after consecutive record-breaking crowds for home England Tests, the game at Kingsholm and then in the East Midlands emphasizing more than ever the popularity of England’s women.

Zoe Harrison laughs when asked if she was able to count the number of selfies she took with fans last Sunday, the sheer amount of fans surrounding the advertising hoardings similarly uncountable as the 23-player squad tried to give as much of their time as possible to those who stayed behind.

“It is really good to see everyone and thank them for coming,” Harrison said. “We are now making record breaking crowds and we want people to turn up, and for the people who have turned up to come back again.

“When someone makes a break, you can literally hear the crowd going nuts. It is so good to go somewhere, look up and it [a stadium] is filled around you.”

Coming into a decisive final round of the TikTok Women’s Six Nations, where the winner of France vs England will lift the competition’s title, Harrison and her teammates will again be playing in front of a full stadium.

Every game the #RedRoses stay out on the pitch signing and taking selfies for at least an hour ??

Already in the Basque Country in order to prepare for the game, Simon Middleton’s side have travelled to France in the knowledge that they will be playing at a full Stade Jean Dauger.

Over a month ago it was announced that the French had sold-out the stadium, with nearly 11,000 supporters due to make their way to the stadium.

Playing in France is always a special occasion no matter who is playing. It is touted as a special experience, with fans there to make noise, Harrison having made numerous trips to the country in the past to play international rugby.

“They are loud in France, so to have it all packed out, it will be good to play in that,” the 24-year-old said. “I have played quite a few times in France, they have always got a whole orchestra going, banging on drums, trumpets going.

“They are playing songs whilst you are playing, it is crazy. You can hear people going doo-doo, doo-doo [mimes playing the trumpet] and whacking drums. That’s basically what it is. It is constantly loud.

“You do notice it when there is a break in play. You just think ‘that is loud’, but when you are in the game, you don’t let it get into your head. You are just too busy thinking about what you are doing and your players.”

When it comes to their Six Nations, England top the table largely thanks to their try scoring exploits. Scoring 258 points and only conceding 10, it has been fairly easy going at times for the world’s number one side.

France too have 20 points, having won four games on the bounce and picked up all their try scoring bonus points, making it a straight shootout this weekend.

Even when thinking about England’s efforts, it is fair to say that there have been hurdles for them to overcome in several of their games. This includes their slow finish against Scotland in the opening round, before condemning Italy to a damning defeat.

Wales and Ireland proved tricky, the opposition making life uncomfortable for England at times, the Red Roses only having a 10-point lead over Greg McWilliams’ Ireland at the break in Leicester.

“In our second half, that is probably where we would want to be,” Harrison said. “In the first half, we didn’t start that strong. It was quite tough.

“For the first 10 minutes, we were on it, and then we lost our flow a bit, and then we came out in the second half and from minute 40 to 80, we took all momentum, and it was our game to play.

“If we take that second half into France, that is where we want to be. But we want to push it further because our 80-minute performance wasn’t good. That’s where we are not looking.

“Teams are working out ways to break us down and really going for us, it is not just a little bit, it is the whole game. They are constantly going at it.”

With England and France seen as the benchmarks of women’s rugby right now, the noise that other unions are making about professionalism is noticeable.

Following England’s 74-0 mauling of Italy, the Azurri announced their first wave of professional contracts, whilst Wales have just begun their move to professionalism, and following Ireland’s defeat at Sunday lunchtime, reports have emerged that the IRFU are looking to make their stars full-time.

On Tuesday, in a press briefing, United Rugby Championship CEO, Martin Anayi, said that a women’s version of the competition should be launched “sooner rather than later”.

Exactly how that competition will work will no doubt have to be decided, but it is clear that plenty are looking to invest more into the fastest growing area of the game.

As far as Harrison is concerned, her focus is primarily to do with ending this Six Nations on the highest note possible, the Rugby World Cup the next stop for the young fly-half.

Having played second fiddle for the early part of her international rugby career, the Saracens back is full in the knowledge that she is a key name on the team sheet.

Having led Saracens since the tender age of 18, Harrison has turned to both teammates and former players to develop her game and leadership on the field.

“Sitting down with Alex [Harrison’s brother] and going through stuff has really helped me,” Harrison said. “For me, it is also working with older players and people who have actually been to a World Cup and if they can be on your side and listen to you. That means you are doing something right and you are taking control. 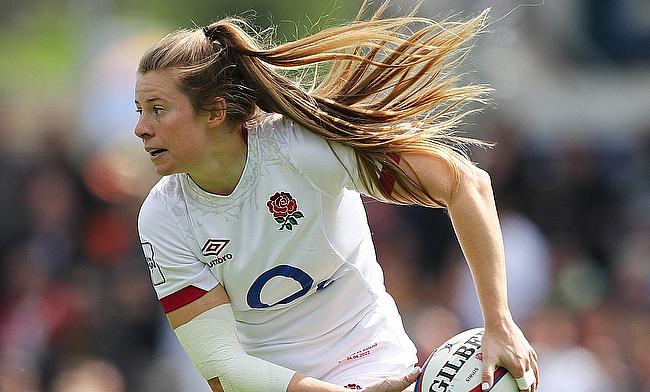 “I have to be confident and know that my thoughts are right, and that I can take control of a team and lead it. It has helped being at Saracens with Marlie Packer and Poppy [Cleall]. Packer has won a World Cup and Poppy has been to a World Cup and has been in an England jersey quite a lot.

“Being able to take control of them there [Saracens] and the whole team, that has really helped when going into England. I have also got people here like Natasha Hunt and Scaz [Emily Scarratt] left and right of me the whole time and they help me through it.”

It is no open secret of what will be coming in the months to come. After the conclusion of the Allianz Premier 15s season, England internationals will be hoping their efforts in the league and this Six Nations will be enough for a place at the Rugby World Cup in New Zealand.

France are likely to be some of England’s sternest opposition in six months’ time, a win for either side going a long way to indicating which could be the northern hemisphere side to beat.

“To be honest, I don’t think we are saying this game is going to put a statement out there,” Harrison said. “That is not in our heads at all. We are here to win the Six Nations and finish with a good end to the campaign.

“I think that is what we are going to do and put in a very good performance, so that is the performance we can look back on and move forward from. That is in our heads mainly, more than what is to come next.”