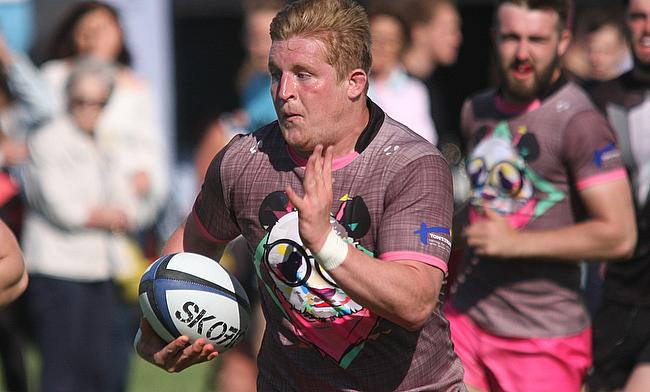 Johnny Matthews scored tries for fun when he plied his trade in England and his habit has continued north of the border as George Plevan found out when he caught up with the Boroughmuir forward.

GP: Johnny, you’re originally from Liverpool which is not your traditional rugby city; how did you get into playing?

JM:  I wasn’t very good at football so I just fell into rugby honestly. I was always a fairly naturally well-sized, quick individual so I suited the game I suppose.  I started properly playing when I was about 13 at my school, St Edwards College, as well as at Liverpool Collegiate.  Then I moved to Leeds when I was 16, and joined Leeds Carnegie.  Later I played for Ottley RFC in the national league and eventually I went down to Sedgley Park in Manchester.

GP: What made you venture north of the border and join Boroughmuir?

JM: I loved it down [at Sedgley] and I still go and watch them as much as I can but I just fancied a change. I knew a few boys who I’d played with that came up here so I asked them and they said it would be a pretty good fit for me.  They were right; I’ve loved it.  Boroughmuir is a very similar club to Sedgley Park, very family-orientated and with a good community here so I’m really happy up here.

GP: Glad to hear it.  We’ll get into the details later but it’s fair to say that, individually, you’ve not done too badly this season.  What was it about your rugby development that’s set you up for this sort of success do you think?

JM: I was lucky that at school I had some really good coaches at a young age, and some of them are still there. Gareth Davies, who is still Head of Rugby, and Dominic Johnson, my first ever rugby coach, were both pretty big influences on me. Dominic McKenzie, John Broxson, and Dave Mercer as well.  They all played at a high level themselves so they could give me little tips and insights into the game that were a really big help for me.

My parents were also key early on, driving me to all my training session and giving me the chance to move to Leeds.  Their support has been immense and they still come up to watch me in Edinburgh!

Moving forward, I got into Player Pathways at Lancashire and I progressed quite quickly with that level of coaching.

GP: How do you find the coaching differs from playing at school and at club level to something like Player Pathway

JM: The big jump was probably when I moved to Leeds and joined Leeds Carnegie actually.  There, they had a massive focus on the little details like tips on the ruck, scrummaging, throwing, the 5-10 per cent that make your game better for your position.  They all add up, I think.

GP: So is that what you’d suggest that young players with ambitions of playing a high level of rugby focus on, that 5-10% of fine-tuning for your position?

JM: It’s funny, we had a Q& A last week and this was one of the questions I got asked!  We had a good answer from one of our players.  He said that the tendency is to focus just on the things that make you a good player but you don’t want to pigeon-hole yourself, especially as a young player. You don’t know where you’re going to end up playing. I started on the wing because I was fairly quick, quite big and didn’t know much about the sport but I’ve ended up being in the front-row. Your body changes so quickly that you can’t know where you’ll finish when you’re just starting out, so you should work on your whole game.

GP: On to Boroughmuir’s season, how do you feel you guys went this year?

JM: The season has been ups-and-downs. We set ourselves a target at the start of the season to be in the top four but we didn’t quite hit it.  It’s a bit disappointing and we ended up 16 points off our target but there are quite a few factors in that.

Everyone can say this but we had a serious amount of injuries to key players. Losing Tom Wilson and Chris Laidlaw, our 9 and 10, early on didn’t help. Players filling in did a really good job and really performed well but at one point there were about a dozen first team lads out injured. It was quite tough but we stayed together as a group, which is a good sign, and we were pretty much in every single one of the games we lost.

GP: Yeah, sometimes things just don’t go your way.  Have any young guys put their hands up this season?  Any boys we should be keeping our eyes on?

JM: We’ve got a couple of young players that have stepped up with the injuries.  One lad, Dan Winning, who was actually out for a lot of the season, played in the recent win against Melrose.  A tight-head prop: really good player.

Congratulations to Johnny Matthews top try scorer in the Premiership a remarkable achievement for the front row union https://t.co/lAN00jpSZ9

Another young lad is Cammy Scott; he’s looking pretty good.  He’s a fly-half and still in school but he’s played a couple of games for the 2s.  We’ve also got a couple of young second rows, Will Ingles and Callum Atkinson. If the club can keep a hold of these boys over the next couple of years, it’ll be in a fantastic position.

GP: Exciting stuff! It must be great to have someone like Graham Shiel, with international coaching experience, come on board as well?  How has he helped you guys develop your game do you think?

JM: Yeah, Graham’s been more involved from about January and since then we’ve tried to change our style of play. We’ve looked at trying to get more players touching the ball and to spread the play.  We want to play an attractive brand of rugby.

Also, we’ve got our mantra here ‘One club, one culture, one community’ and Graham’s good at getting us to train as one club. So, when the 1st team don’t have a game, he gets some of us down to help coach the 3s and bring them on a bit. It’s different when a player says ‘Mate, try this’, rather than a coach always saying it. It soaks in a little bit more.

GP: Whenever I mention your name to anyone, the first thing that comes out their mouth is that you’re the league’s top try scorer. 19 tries as a hooker is pretty impressive so I’ve got two questions.  One, do you see the hooker position evolving?

JM: Definitely, definitely. You look at Scotland and Stuart McInally, the current hooker, he was a backrower. Fraser Brown played in the backrow at some stage as well, I think. It’s the way the game is changing. Some of the Southern Hemisphere hookers, they stand on the wing and can pull off 15, 20 metre passes off both hands. But also, I think it depends on what type of coach is in charge. You get some coaches who take the view that a hooker scrummages and throws at the lineout and that anything else is a bonus. Then you get others who want them to play as a 4th backrow.

GP: It’s definitely a more interesting time to be packing down in the front row, that’s for sure!  And my second question is… how many of those tries did you score by flopping over the line at the back of a driving maul?!

JM: Yeah it’s been pretty good, managing to score 19 tries but I reckon 30 yards was the combined total of yards run for all of them! I was behind a good pack at Sedgley Park and I managed to pick up a few tries there and it’s the same here. The guys up front do a hell of a lot of work to get us into the position to score and to let me be the one who dots the ball down.

GP: Regardless, it’s always nice to add to your personal tally! Just to wrap it all up, we’ll head to the Six Nations.  I’m guessing you’re an England man?

JM: Well my mum’s from Glasgow so I pick and choose depending on who wins! I’ve been Scottish for the past year with them holding the Calcutta Cup.