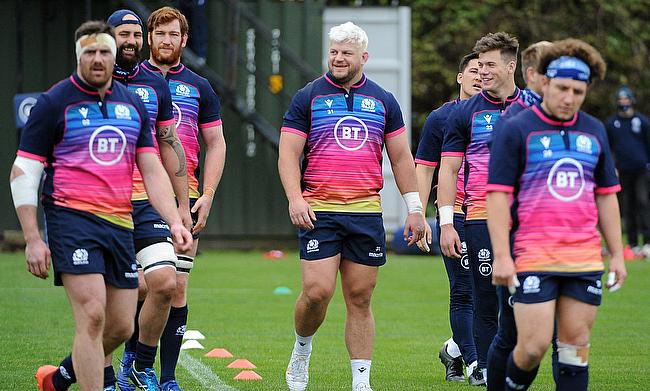 Focus on “family, enjoyment and the game” has Blair back to his best
The old and the new: Cowan and van der Merwe urged to grab their opportunities
Finn Russell included in Scotland squad for Autumn internationals
Scotland players agree to reduction to salary

When Oli Kebble comes off the bench to make his Scotland debut this Friday evening against Georgia, it won’t just be the people in his new homeland - and those in South Africa where he grew up - who will be smiling.

There will also be a number of people in London cheering him on as they watch the friendly match at BT Murrayfield on their TV’s because the loosehead prop made quite an impression when he studied at Dulwich College between 2008 and 2011.

Over the years, the school located at Dulwich Common has produced some top-quality rugby talents. Ex-England forwards David Flatman and Nick Easter are among the ‘Old Alleynians’ and recently, former pupils like Tom O’Flaherty and Beno Obano have been going well.

Winger O’Flaherty won the European Champions Cup with the Exeter Chiefs last weekend and has his eyes on another trophy in the coming days while Bath prop Obano is in the extended England squad to play against the Barbarians on Sunday.

And, after qualifying for Scotland through residency, 28-year-old Glasgow Warriors man Kebble is ready to make his mark with Gregor Townsend’s men as they face up to six Test matches in seven weeks.

“All of us are delighted to see the rugby journey that Oli has been on,” Dulwich College’s director of sport Phil Greenaway told TRU.

Really been an incredible first week with @scotlandteam a true honor for myself and my family to be named in the squad. Thanks for all the messages of support and I can’t wait to put my best foot forward in whatever capacity that may be ???? pic.twitter.com/clsvxnLaVc

“We used to have a school exchange set up with Bishops [Diocesan College in Cape Town] and one of our pupils would go over there for a term and then one of their pupils would come to us. In September 2008, Oli arrived from Bishops and he fitted in at the school straight away.

“He was a big, strong lad in rugby terms even then and you could see that he was going to be a handful for opponents.

“In that term that he was with us, he made a lot of good friends and made a good impression on the staff, so he decided that he was keen to return to complete his A Levels.

“When he came back permanently, he was a big part of the rugby team for the next couple of years and he worked hard on his game and his fitness.

“We actually had quite a lot of props at the time, so sometimes we played him at inside centre and I am not sure the opposing 12s enjoyed that much!

“He was also a very good water polo player and was good at the throwing events when it came to athletics so he certainly made his mark at Dulwich.”

“He has been playing some really good stuff”

While he was at Dulwich College, Kebble caught the eye of the coaches within the London Irish academy and he was involved there before he was selected by South Africa for the World under-20 Championships in 2012.

The son of former Springbok Guy Kebble, along with his team mates, won that tournament on home soil and within that squad were the likes of Handre Pollard and Allan Dell.

After the Baby Boks defeated New Zealand 22-16 in the final in front of over 33,000 people at Newlands in Cape Town, Kebble had dreams of one day playing for the Springboks.

He turned out for the Stormers and Western Province before deciding to return to the UK in 2017 with Glasgow.

Fast forward just over three years and Kebble has made quite an impact at Scotstoun in the scrum and in the loose - and now he hopes to do the same with the Scots.

“There is no doubt that Oli will be enjoying being in the Scotland set-up because he has always liked to test himself,” Greenaway continued.

“I have always kept in touch with him and kept a close eye on what he has been up to since he left the school and in the last couple of years with Glasgow, he has been playing some really good stuff.

“He is very good in the set piece and for a prop that is crucial, but he also loves getting his hands on the ball and running at people!

“Fingers crossed he does get a chance to perform on the international stage this autumn and myself and many others connected with Dulwich College will be proud to see it. He deserves everything that comes his way, he is a great guy.”

“Oli had a decent turn of speed for someone who weighed 120kgs at the time!”

Henry Fraser, the mouth artist, author and speaker who was paralysed from the shoulders down after an accident in 2009, knew Kebble well as a class mate and rugby team mate at Dulwich College.

“He always loved playing with the ball in hand and had a decent turn of speed too - even for someone who weighed 120kg at the time!

“He’s harnessed that power and has really pushed himself to be a better player. I’m absolutely chuffed to see him get the call-up with Scotland and it’s more than deserved considering his form over the past few seasons.

Here is your Scotland team to face Georgia at @BTMurrayfield this Friday (kick-off 7.30pm BST) - live on @ITV4.
?#AsOne pic.twitter.com/ZAzZmcpJF8

“Oli was a big part of my life on my return to school [after the accident] - he is a very kind, generous man and I couldn’t be happier to see him succeed.”

For the Georgia match, Scotland have handed a debut to another South African-born player from the start in the shape of winger Duhan van der Merwe while Finn Russell should earn his 50th cap from the bench.

Scotland v Georgia takes place at BT Murrayfield on Friday (7.30pm) and is live on ITV4