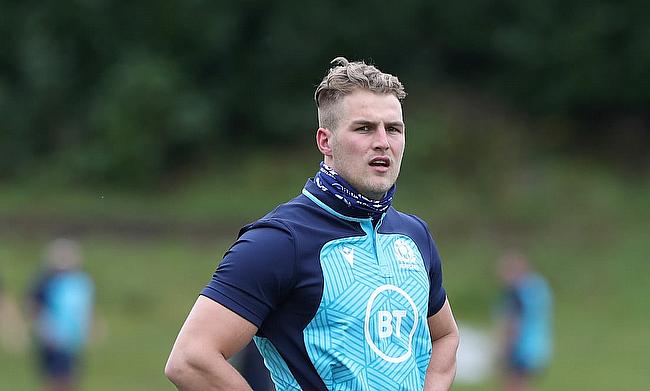 Gregor Townsend pleased with Scotland's win over Georgia
Match Report: Scotland 48 - 7 Georgia
“He deserves everything that comes his way”: Dulwich College proud of Oli Kebble ahead of Scotland debut
Focus on “family, enjoyment and the game” has Blair back to his best

When he was a youngster growing up on the Western Cape of South Africa, Duhan van der Merwe used to watch the Six Nations on TV and think ‘who would want to play in the wind and cold weather like that?’.

Fast forward a few years and it is the powerhouse winger himself who wants to play in those conditions and the 25-year-old Edinburgh Rugby man has now set his sights on facing Wales this Saturday at the Parc y Scarlets on the delayed Super Saturday.

Gregor Townsend’s Scotland did a lot of good things on Friday night in their friendly 48-7 win over Georgia at BT Murrayfield with one positive being van der Merwe’s try in his first appearance.

The way the man who qualifies via residency came off his left wing to take an inside ball from replacement stand-off Finn Russell to canter in under the posts, was great to watch.

And with captain Stuart Hogg set to return for the trip to Llanelli after his double heroics with Exeter Chiefs, suddenly Scotland’s attack is looking a lot more potent.

“It was special scoring a try on my debut, I was delighted because when Finn came on, he kept saying to me ‘make that run on my inside’ and I did and he put me away so I was happy,” van der Merwe told TRU.

“The game was live on SuperSport back in South Africa so my family and friends were able to watch it and then Scottish Rugby managed to get my family on a Zoom call afterwards when I was presented with my first cap in the changing room so that was great stuff, very special.

All my family and mates were on the Zoom call as well as Finn’s family for his 50th cap and Oli Kebble’s family for hist first cap, so it was very special while our captain Fraser Brown presented me my cap.

“On Friday Gregor just said to me ‘go out and do your thing’ and that calmed me down a lot and I was keen to get going. Now I want to build on that if given a chance against Wales.”

Five things to ponder for Scots ahead of Wales clash

Rory Sutherland has been a revelation in the number one jersey since he returned from the wilderness earlier this year. He is looking fit and confident while they now have a very solid replacement to come off the bench in the shape of Oli Kebble who looked comfortable on debut versus Georgia.

Scott Cummings, the 23-year-old Glasgow Warrior, only made his debut last August, but he has been a regular since then and would seem to be one of the first names on the teamsheet. Does the unseen, unglamourous work, but he also runs great lines and carries well while he leads the lineout and has a good rugby brain on his shoulders.

The Scots pack looks fairly settled and, barring any injuries this week, should feature Sutherland, Fraser Brown, Zander Fagerson, Jonny Gray, Scott Cummings, Jamie Ritchie and Hamish Watson against Wales, but who will play No.8? If Matt Fagerson is injured it could be Cornell du Preez, Nick Haining, Sam Skinner or maybe even Magnus Bradbury if he earns a late call-up to camp.

Is Sam the man?

In recent times, Glasgow Warrior Sam Johnson has been the head coach’s ‘go to’ man at inside centre and Townsend will want to get him back into the fold as soon as possible, but the Australian-born player only made his comeback from injury in the PRO14 at the weekend so it will be interesting to see if he makes the step-up straight away.