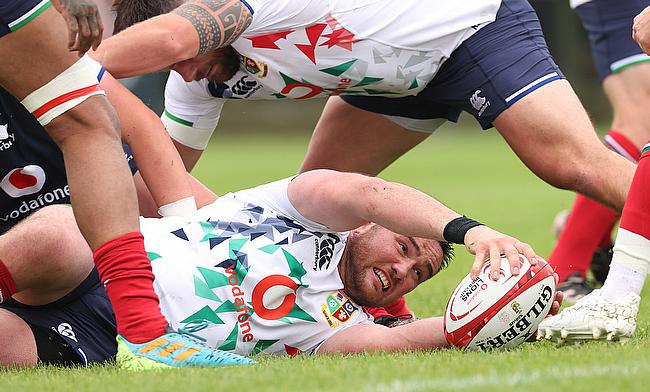 Zander Fagerson made his Scotland debut in 2016
©Inpho Photography

All rugby fans remember watching the British & Irish Lions on the television when they were younger and falling in love with the famous select side as a result.

For those of us of a certain vintage it was the tour of South Africa in 1997 that captured the imagination, but for tighthead prop Zander Fagerson, who is in Jersey with the current squad, it was the 2013 Test matches against Australia that whet the appetite and got him dreaming of one day wearing the iconic red jersey.

He hopes to do that this coming Saturday when Warren Gatland’s men take on Japan in the Vodafone Lions 1888 Cup clash at BT Murrayfield and the Scottish front-row told TRU:  “The Lions memory that sticks out for me was when I was at a Scotland under-17 training camp over in Valladolid in Spain in 2013.

“We watched all three Tests and I remember the last test when props Alex Corbisiero and Adam Jones destroyed the Australian scrum and helped the team to win the Test series [41-16 in Sydney the result in that one as part of a 2-1 Test series triumph].

“That is the thing that sticks out in my mind, what an incredible tour that was and just watching the boys tear them apart, especially the props, was awesome.

“If selected to play for the Lions this Saturday it will be a dream come true. For me growing up, playing for Scotland was the biggest dream of all and I never thought about the Lions.

“So now to possibly play at Murrayfield in a Lions jersey, well it would be absolutely incredible.

“We know what Japan are going to bring. They are going to be fast, physical and they are a good scrummaging unit themselves. If selected it will be a good challenge and hopefully I will get an opportunity.”

Fagerson on Sutherland influence: “We push each other on”

The Lions matchday squad for the Japan game is due to be named on Tuesday late in the morning and 25-year-old Fagerson hopes to see the name of fellow Scot Rory Sutherland in there along with his own.

The 28-year-old loosehead prop has battled back from a shoulder injury picked up at the end of the Six Nations to train fully with the Lions at their Jersey camp over the last 10 days or so.

And the Glasgow Warriors man said of his Edinburgh Rugby team mate:  “I am pleased for Suz, to have him on the tour is awesome and to have him back firing and looking in good shape is even better.

“He has been class for the past few years. We push each other on, in training we always do one on ones. We work on things and it is great to have him here and to have an opportunity to play with him for the Lions at some point would be awesome.

“The South African’s are a physical team and the physical battle will be crucial once we get over there. It is one I am looking forward to if selected for the Tests. It will be tough competition and tough throughout the whole tour because South African teams pride themselves on their forward play and their scrummaging.”

Japan may not have played a proper Test match since Rugby World Cup in their own country, but Lions defence coach Steve Tandy is certainly not taking the challenge that awaits his charges in Edinburgh lightly.

“Japan are an outstanding Test match team,” the Welshman who is part of the Scotland coaching panel explained.

“You saw what they did in the World Cup. They have some real quality players, so we know how tough this Test is going to be. We only came together last Monday while they’ve been in camp for a while, so we know it is going to be an awesome test for us.

“We really want a performance and to back that up with a win.

“I don’t see this as a curtain raiser, I see it as a full-blooded Test match.

“We’ve looked long and hard at Japan. They haven’t played a lot so we’ve had to look at historical data, we know that they keep the ball for long periods, make a lot of passes, so that’s what we’ve got to be prepared for in this one.”