Zack Henry: I am motivated to take my rugby as far as possible in France 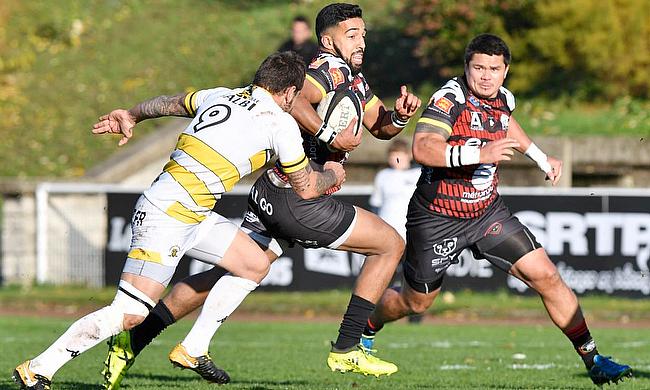 Zack Henry in action for Rouen, but now he is set to write a new chapter in France
©Zack Henry & Stade Rouennais

Henry: “There is more pressure, but there has been more reward”
Zack Henry aiming to continue his French connection
No pressure on us – Henry
Henry - Focusing on Bath and the professional dream

Zack Henry turned up in France fresh out of Bath University with little in the way of fanfare. He has since become a key player for the ambitious Rouen Normandie Rugby, playing in decisive games and he has recently stepped up to the French Pro D2 with USON Nevers Rugby.

Henry is quite unusual in that he decided to sign in the French Federale 1 with Stade Rouennais rather than pursue a career in England. He believes that he been able to advance more quickly over the Channel.

“I think it has been and will continue to be easier for me to develop out here in France. The way they play the game out here suits me. There is less focus on set piece and generally a faster more open game.”

Henry is now renowned for his goalkicking and the speed of foot and mind inherent in his attacking play, but before he attended Bath University, he was actually a scrum half.

“I learned lots about playing 10 at university under Head Coach Aaron James. Before university, I was a 9, so having game time at 10 and playing in big games such as Varsity and the BUCS league helped me learn the position!”

On his decision to not sign for a Championship club in England he continues: “I had spoken to a few teams from the Championship whilst I was at university and was thinking about going into it but I wasn’t feeling overly positive about it.  After speaking to Richard Hill about the opportunity of France I was sold and it ended up working out well.”

Henry’s brother Jake is an experienced Championship player with stints at Plymouth Albion, Rotherham and a recent move to Hartpury under his belt. Henry is clear that Jake’s experiences have informed some of his own choices.

He said: “I think the main thing I’ve learnt is that the player welfare over in France is a lot better than in England. The way the players are looked after over here is definitely one of the reasons I’ve stayed out here. There is a lot of talent in English rugby but often, especially in the Championship, they aren’t looked after properly and it can hinder progression.’”

Another key difference that Henry continually references is the rugby culture. French rugby culture is very tribal, sometimes hostile but full of sound, colour and pageantry with brass bands, singing fans and chants echoing around the stadiums at almost every ground. He points out that “there isn’t as much of that in England except for the few big Premiership clubs.”

Another potential avenue for Henry was the 7s route and having won gold at the World University Games, he was initially tempted to pursue playing in the World Series.

He added: “I was absolutely loving my 7s and still do. I sometimes think I could’ve carried on playing because I enjoyed it more than 15s at the time. However, there wasn’t a concrete opportunity for me and I had a few coaches give me false promises about maybe getting into the England setup so I took the 15s route. Now I’m playing Pro D2 it definitely worked out for the best.”

Henry’s two seasons at Rouen Normandie Rugby under Richard Hill brought him to the attention of Pro D2 teams. He kicked immaculately in the Federale 1 final in 2017 before spearheading the team’s push for promotion last season. They just fell short, losing in the final to Bourg-en-Bresse.

“Rouen was a great two years (despite losing teeth and shattering my jaw!), said Henry. “I learned a lot from Richard Hill and from some great players around me who have played at the top of the game. I also met some great blokes and had a brilliant time. Leaving was a hard decision but I am motivated to take my rugby as far as possible and having had some Pro D2 offers I knew I had to move on.

“It was a sad end to not get promoted with Rouen but Bourg-en-Bresse were a strong team who executed a good strategy and probably deserved the win in the final. Nonetheless, we exceeded expectations by reaching the final and I will always be grateful for the opportunity I had there and the people I met. I also managed to learn French there which has changed my life!”

Henry fielded approaches from Pro D2 and Premiership clubs but he says it was his last choice which made is decision for him. He said: After visiting Nevers, which was my final offer, I was certain it was for me. The ambition of the club and their results speak for themselves, but once I’d seen the stadium, the ridiculous training base and had spoken to the president and coaches I knew it’d be the place for me to continue to improve and hopefully reach the top level.”

Nevers have already achieved what Rouen aspire to do and are now eyeing the Top 14 after finishing just outside the Pro D2 playoffs in their first season in the division. Henry says that “it’s definitely a club capable of being promoted to the Top 14 and I’m hoping we can do that."

With a purpose-built training ground, well-equipped support staff and a small but packed stadium, they are set to finish higher this coming season. French teams are a mixed bag in terms of facilities but Nevers are a modern setup, providing their players with everything you’d expect of an elite sports team.

In terms of his style of play, Henry feels like he has more leeway to play what he sees in France: ‘I’ve certainly had coaches in England put the shackles on me to play like a ‘traditional English 10’. I like to play fast and wide and I feel like in France I can do this.

“When speaking to Nevers it seemed as though they signed me for this reason. Whilst teams still follow strategy and structure out here there is still that degree of playing what you see and finding the space which I like. The coaches definitely help me, give me advice on how to improve as a 10 but at the same time they let me be myself on the pitch and continue to play how I enjoy.

“I think the biggest difference at Nevers is the speed at which things need to be done and the little time you have on the ball. I’ve also learned that there are times I can’t play fast and wide and sometimes I need to slow it down and return to structure. On a lighter note they don’t like it much when I play football at the training ground instead of rugby!"

Henry is living with fellow new signing Zac Guildford who has experienced a wide range of what rugby has to offer. Henry has been fascinated by Guildford’s stories and the former Crusaders man is still a fine player in his own right and Henry believes that he can learn a lot from playing with him."

Outside the game, Henry is completing a Masters Degree in Sports Psychology as well as using the free weekends in France to travel around Europe. He’s well ensconced in French life and doesn’t imagine leaving too soon with his immediate goals being aligned with Nevers.

“My goal is to play Top 14 but for now I’m focused on doing the best with Nevers. I’m keeping my options open for the future because you never know what opportunities will come up.”

His new deal runs for two years but he can’t see himself returning to England too soon. “The lifestyle and rugby out here is so good that I’d have to be sure it was right for me to come back because I think if I leave France then I’ll probably not be able to return.’