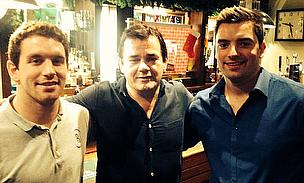 See the Talking Rugby Union team go behind the scenes and in front of the cameras at the third instalment of the Heineken Cup Rugby Show.

This time the Show’s host Will Carling and the inimitable Scott Quinnell were joined by Special Guest Host, World Cup Winner, Matt Dawson.

The TRU team headed down south, towards the Capital and the world famous Cabbage Patch Pub in Twickenham, just a stone’s throw from the home of rugby.

With the Heineken Cup group stages finished and all knockout places finalised, Talking Rugby Union’s Austin Halewood spoke to Will and Scott about their thoughts on the last few rounds of the competition, their predictions for the final and their thoughts on Six Nations.

Talking Rugby Union’s access to all areas of the show’s production and presenters was a resounding success, with an incredible insight into the game.

Talking Rugby Union have been long-time supporters of Heineken rugby, having worked closely with the Heineken Kinsale Sevens tournament since 2011 and as a result of this were invited to London to be part of the filming.

The evening was a tremendous achievement with the best analysis of the last two rounds, insight into life as a professional rugby player and stories from on and off the field.