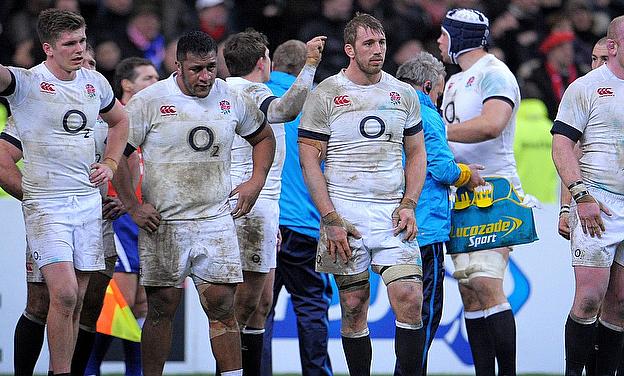 England endured heartbreak in their RBS 6 Nations opener as France substitute Gael Fickou struck with a late try that Maxime Machenaud converted to snatch a 26-24 victory.

Having drawn on their reserves of character to overcome a 16-3 deficit built on two first-quarter tries from wing Yoann Huget, England were in control as they established a 24-19 lead.

With Danny Care, Billy Vunipola and Mike Brown influential, they had staged a fightback founded on persistence and self-belief.

Brown was the first over the whitewash after forcing his through three blue shirts in a typically tenacious finish and was followed over by debutant Luther Burrell who had been set up by the strength of Vunipola.

All England needed to do was play out the game in the opposition half, but France were equally tenacious and their refusal to throw in the towel saw the dancing Fickou score a classy try, finishing under the posts to make the conversion a formality.

France started the afternoon as odds-on match favourites, but they looked second best for much of the opening-day title showdown.

The forward-led assault widely predicted failed to materialise and England, with a heavier pack, controlled the battle up front with Vunipola superb.

England's debutant backs Burrell and Jack Nowell performed well enough to be reselected against Scotland on Saturday, although Nowell made a shaky start.

Wing Jonny May, winning his second cap, departed early on with a broken nose and was unable to reappear, but Alex Goode proved an influential substitute.

Recalling Care at scrum-half proved well-judged, but for all the positives England were left on the receiving end of a painful defeat that may have ended their title hopes at the first hurdle.

Just 31 seconds were on the clock when France profited from their first stroke of good fortune, although on both occasions the Red Rose contributed to their downfall.

The kick-off was knocked on by Nowell and Les Bleus spun the ball right where Jules Plisson chipped ahead.

It was an ugly kick and not quite what the Stade Francais fly-half had in mind, but it bounced away from Brown and into the hands of Huget who raced over.

Owen Farrell and Jean-Marc Doussain swapped penalties as the opening quarter continued to be played at full throttle.

Disaster struck for a second time in the 17th minute when flanker Tom Wood had the ball stripped from him in the middle of the pitch in an act that was the prelude to France's second try.

There appeared to be little on but a weak tackle by substitute Goode on Huget allowed the wing to offload to Brice Dulin.

The full-back chipped ahead and once again England were deceived by the bounce, enabling Huget to score.

Wood was at the centre of a large scuffle as France took exception to a tackle that was marginally late, but no meaningful punches were thrown and the Northampton blindside escaped punishment.

A collapsed scrum enabled Doussain to add another penalty and England's bad luck continued when Goode, who had replaced blood injury victim Jonny May, danced free of Dulin only to knock on.

Finally England's attack clicked when a series of drives resulted in a ragged French defence that was exploited when Vunipola fed Brown, who powered through to cross.

Care was only fractionally short when touching down as England made a barnstorming start to the second half, built on Farrell's clever kick into the corner.

The Saracens fly-half landed a penalty and Harlequins team-mates Care and Brown were again heavily involved as the French were shoved backwards.

The tide was turning and England's dominance finally made an impact on the scoreboard when they took the lead with Burrell's 48th-minute try.

Vunipola blasted a hole through the midfield and offloaded out of the tackle to Burrell who had picked a superb line that led him straight over the whitewash.

A try-saving tackle by Billy Twelvetrees on Wesley Fofana kept France at bay, while at the other end a drop goal from Care extended England's lead to five points.

Substitute Machenaud landed three points and Goode replied in the same vein, and the game had become a cagey exchange of kicks, each side seemingly waiting for the opposition to commit an error.

But it was not a mistake that enabled France to break from their half and snatch the lead with three minutes remaining.

Dimitri Szarzewski showed great awareness to delay his pass to Fickou and the wing stepped inside England's cover and sprinted in under the posts.