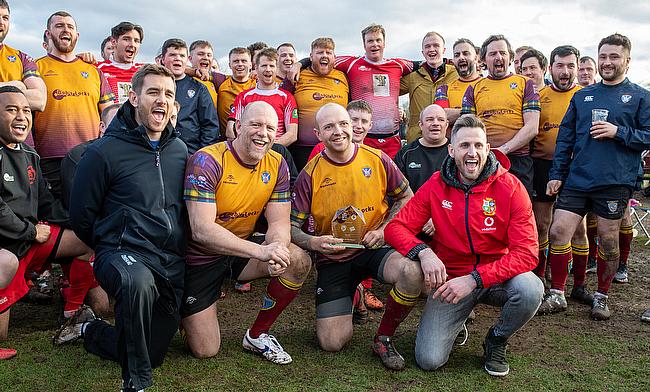 The 24 hours which saw Scotland’s Women reach the Rugby World Cup
Tommy Seymour Exclusive: “They are all phenomenal - they give Scotland a completely different set of weaponry"
Hot property Henry: Scottish speedster Jacob making his mark
Ollie Phillips: 'Doddie is an amazing man - what he and his family are going through is unimaginable'

Many people up and down the UK were delighted to get back to the ‘normality’ of grassroots rugby last weekend as the men’s Six Nations took a break.

However, there was nothing normal about what was going on at Bannockburn Rugby Club in Scotland when former England centre Mike Tindall took to the field and faced up against a British Army in Scotland side…

The 43-year-old made a cameo appearance off the bench for the men’s team from the community club that is based in the south of Stirling because The Good, The Bad & The Rugby podcast hosts - Tindall, James Haskell and Alex Payne - were on their third stop of Vodafone’s Lions Legacy Tour.

Bannockburn is one of four clubs - alongside Westbury in England, Dungannon in Northern Ireland and Aberdare in Wales - taking part in the initiative which is dedicated to supporting grassroots rugby.

The club was selected due to its role in offering training to armed forces veterans by helping them to remain active and to take an increased interest in rugby through free training sessions.

The juniors played, the men’s team took on the British Army in Scotland, the women’s side - the Bannockburn Valkyries - faced Paisley and Clydebank and The Good, The Bad & The Rugby lads answered plenty of questions from the large crowd after many hours of fun which reiterated what rugby is all about.

“It was a brilliant day, one we won’t forget in a hurry,” Bannockburn director of rugby Jimmy Samuel told TRU.

“We wanted to use the day to showcase all of the good things that are going on at Bannockburn and I think we managed to do that.

“We are just a small club, but we want to play a big part in our local community going forward and we really do want to make people aware that this is a sport for all.

“Whether you are male, female, young, old or whatever, there is a place in this great game of ours for everyone and I and many others are passionate about taking the club forwards in a positive way.

“Days like last Saturday certainly help because, after the last two tricky years, it shows you how many people want to be involved with Bannockburn and it meant that our trusty band of volunteers were all smiling come the end of the day.”

As mentioned, the club was selected to be part of this initiative due to, amongst other things, its work in helping armed forces veterans remain active later in life.

The armed forces are something that has played a huge part in Samuel’s life and he is very passionate about this particular stand of Bannockburn.

“I spent 26 years in the military and from day one since I joined Bannockburn, I saw that that the club provided a good place for veterans to get involved and I wanted to open that up to even more veterans,” Samuel, who is originally from Bedford and who moved up to Scotland three-and-a-half years ago, states.

“The armed forces and rugby have unique ties as they are both based on a strong culture and togetherness. I know how much being involved at Bannockburn has helped me in my transition out of the military and I am really passionate about helping others do the same - and if that is at our fantastic wee club then that is brilliant!

“It was so good on the day to have a strong British Army in Scotland squad coming to play against our men’s team and there were a few bemused faces when Mike Tindall trotted on, but it was great to see him in a Bannockburn shirt.

“Our junior section and the women’s team are both going from strength-to-strength too, so it was excellent to showcase them on a busy, but very worthwhile, day.”

Bannockburn president Iain McEwan paid tribute to those involved with the day and was a proud man after the dust had settled.

“The Vodafone Lions Legacy Tour day last weekend was a hugely significant event for the club and I’m pleased to report that it was a phenomenal success,” he explains about the opportunity that came about after former Bannockburn member Rob Blunden put the club forward.

“Not only did we raise funds and benefit from the presence of global brands and big personalities on the day, but we’ve boosted the profile of Bannockburn in the world of rugby.

“My personal thanks go to each and every person who put in the graft and made the day happen.

“Thanks to the Vodafone UK team for bringing the event to Bannockburn as well as their generous donation of tech to support the club’s development.

Really lucky to have a helping hand with minis coaching at @bannockburnrfc today! Great to have @GoodBadRugby joining us and a big thanks to @miketindall13 ?? pic.twitter.com/NCZe7EfmAC

“Thanks to James, Alex and Mike and the team from The Good, The Bad & The Rugby not just for bringing their podcast to the club, but for being genuinely nice folks and spending time with our club members. A special thanks to Mike for filling in at 12!

“Thanks to Canterbury for their kind donation of kit and for sponsoring our crossbar challenge and to Tommy Seymour and Lisa Martin for taking the time to come to our club.

“Thanks to opponents on the day as well as the match officials and the Argyll & Sutherland pipes and drums for leading the teams onto the pitch.

“It was inspiring to see the junior section having so much fun and to see the next generation of Bannockburn players enjoying themselves.

“So a final thanks must go to all the coaches, players and volunteers for turning up every week. You make our club and I’m proud to be part of it with you.”