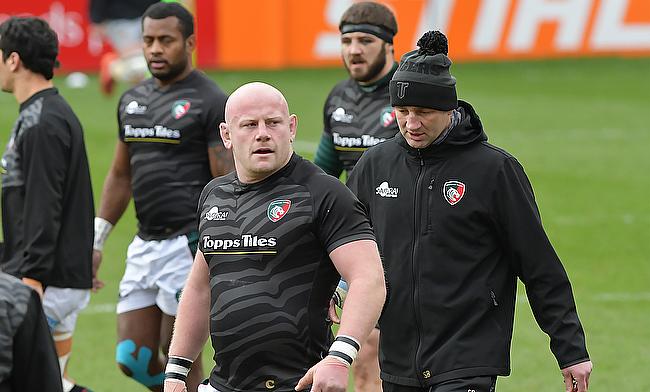 As you might expect from someone who has pretty much seen it all in the game, Dan Cole is keen to live in the moment.

Cole has won three Premiership titles with Leicester Tigers and internationally, his 95 England caps and two British and Irish Lions tours highlight the career which the 34-year-old has had thus far.

And whilst a large portion of this current crop of Tigers may not have those experiences to look back on, there is an awareness from Cole that his club have entered a new era and they are back on the right track following two miserable years at the wrong end of the Premiership table.

“I think we are a much-improved side,” Cole said. “We are heading in the right direction. We have had a lot of change, but I think we are starting to build an identity and the way we want to play the game.

“We are adding bits to that as well. We have got the basics in place. Our scrum/maul has been very good. We are attacking more and throwing the ball around more so we are constantly layering our game and that takes time. We are starting to see that now, but the main thing is probably the fight we have shown in the team.

Dan Cole has re-signed with the club.

“Every team we have gone up against, even when it is a rotated side, the Leicester team has played for 80 minutes and tried as hard as we can win, lose or draw and that’s the most important thing.”

The path which Leicester currently find themselves on has been paved by Steve Borthwick. The former England forwards coach arrived at Mattioli Woods Welford Road last summer during the first lockdown, but once the Premiership returned in August, there were small glimpses into his vision even at that early stage of his tenure.

Borthwick gave “16 or 17” debuts towards the end of the 2019/20 campaign, which allowed the Leicester boss to assess the potential he had within the squad. In terms of results, the club won just two of their final nine matches - against London Irish and Northampton Saints - but the Tigers head coach was unperturbed by another 11th placed finish.

Given their rich history, Leicester will always be a side with lofty ambitions and whilst this year the currency of success may not be silveware for the East Midlands outfit, the fact they reached a European final and can nail down a Champions Cup spot this weekend should fill Tigers supporters with a lot of encouragement.

But how has Borthwick been able to turn around the club’s fortunes?

“I think Steve for every player has a plan and how you fit into the game plan,” Cole said. “This is your role, this is what I want you to do and I want you to do it to the best of your ability. He has probably simplified the game down and he is asking us to play to our strengths.

“You see your role within the greater scheme of things and you know what Steve wants of you, what he wants you to commit to and how to get better. As a player, you want that clarity. You can see yourself getting better and you can see that feeds into the team and how the team gets better on the back of it.

“[Before Borthwick joined Leicester] I don’t think we had the clarity or the identity we have today. Steve has come in with a plan and the way he has executed it and added layers on top as the season has gone on, I think you have seen the results of that this year.

“I don’t want to say it has brought us success, but it has brought us improvement in the fact that we are playing to the strengths of the people we have got and how we fit into Steve’s plan compared to trying to do everything.”

Cole is one of a considerable cluster of leaders within the Leicester ranks. Tom and Ben Youngs, Ellis Genge and George Ford all have bucket loads of Premiership experience between them whilst the arrival of Richard Wigglesworth has been one of the most influential signings of the last 12 months.

That mix of knowledge and youth which Borthwick has conjured up has been a recipe for progress for the Tigers and it was reflected in England’s recent squad announcement for their summer fixtures against Scotland ‘A’, the USA and Canada.

Whilst the aforementioned Ben Youngs and Ford are being rested, the in-form Genge was selected alongside five of Leicester’s young starlets.

Joe Heyes, Harry Wells, Dan Kelly and Freddie Steward could all make their international debuts in the coming weeks, whilst George Martin will be keen to add to his one England appearance after making his bow during the Six Nations.

“You look at the development the squad has made,” Cole said. “We have got a lot of young guys in our team and I think a lot of them have stepped up and really improved. There are a lot of guys knocking on the door for international honours.”

“I think players benefit from training with and against the highest standard of players as possible. I think the standard of coaching at international level is superb so any experiences like that will enhance a player’s game as long as they have that hunger and desire to improve.”

Alongside Leicester’s England contingent, the likes of Cameron Henderson [21] will be with Scotland this summer when they take on Romania and Georgia whilst Jasper Wiese’s excellent form has earned him a spot in South Africa’s plans for the upcoming British and Irish Lions tour.

Cole is more than aware of the benefits of gaining international experience at a young age. The prop did represent England ‘A’ before breaking into the senior set-up and with the development side making a comeback this year against Scotland at Mattioli Woods Welford Road, the forward is excited to see the next generation of Tigers take their opportunities.

“It was big [playing for England A]," Cole said. “Any time representing your country is a massive thing, but you get exposed to different coaches and different players and different ways of doing things.

“As a player, one thing I have learnt in my career is the ability to go to England and the Saxons [now England ‘A’] and learn from different environments. You get exposed to stuff that you don’t at your club and I think that is massively important. We played with Stuart Lancaster at England ‘A’ and he obviously got the national coach role after that so you kind of saw how things worked and it helps your progression in that regard.

?? "If these guys can take their opportunity and keep growing, who knows what might happen?"

?????????????? Following the announcement of his initial 34-man England squad, an 'excited' Eddie Jones spoke about the importance of this summer??https://t.co/BUbFQQX7ZA pic.twitter.com/eHo840r6qx

“There is a massive talent base within England and you see a lot of young guys especially coming out the under-20s and the age groups and pushing for international honours. Having that ability to go to England' 'A' is a stepping stone and it has shown it has worked many moons ago.”

With the taste of international rugby to come for Leicester’s youngsters, there is still a job for the Tigers to do this weekend as they look to book their place in Europe’s elite competition for next season.

After the late drama against Bristol Bears last Saturday, they travel to fellow top-eight hopefuls Wasps with their Champions Cup fate in their own hands. Like his experienced prop forward, Borthwick is keen to live in the moment rather than reflecting or looking too far ahead despite the clear impact he has had on the club in the space of 12 months.

“Wasps are an excellent team. They were the Premiership finalists last year. They have quality through the team. Their running game looks incredibly dangerous so defensively, we are going to have to be very, very strong this weekend.”