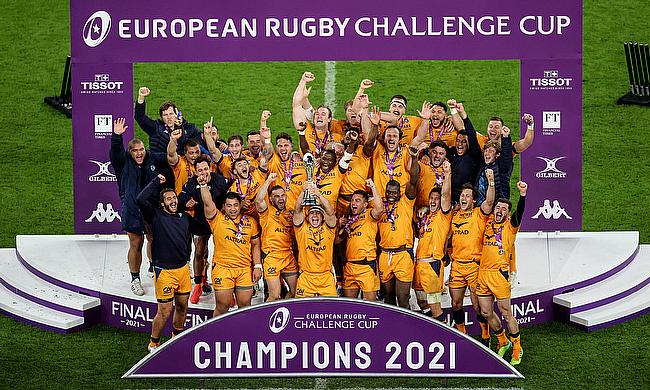 Montpellier managed to hold off Leicester Tigers with a 18-17 win as they went on to clinch the European Challenge Cup title at Twickenham Stadium on Friday.

The result for Montpellier came despite them losing Alexandre Becognee and Guilhem Guirado to sin-bins but tries from Vincent Rattez and Johan Goosen on either side of the break helped them cross the line.

With 10,000 spectators allowed to witness the game at England's iconic home ground, George Ford started the proceedings with an eighth minute penalty goal after the French side were penalised for stopping a maul illegally.

Nevertheless, the response was strong from Montpellier with Anthony Bouthier's kick finding Vincent Rattez as the winger touched down in the 14th minute and Benoit Paillaugue followed with a conversion and a penalty goal to take them to a 3-10 lead.

Injuries to winger Guy Porter and flanker Cyle Brink hampered Leicester's momentum but they had a boost as Montpellier lost Becognee to yellow card in the 30th minute for collapsing a maul and Leicester made use of the numerical advantage with Harry Wells diving from close range in the 34th minute and Ford's conversion meant the teams were levelled at 10-10 at the end of the opening half.

Just as Montpellier returned to full strength, they were again down to 14 players temporarily with this time yellow carded early in the second half and this time Jacob Wiese crashed over following a powerful maul to being Leicester into lead and Ford's conversion made it 17-10 before Paillaugue with his second penalty in the 50th minute brought the gap down to five points after the Premiership side were penalised for not rolling away at the breakdown.

The decisive moment came in the hour-mark as Gabriel N’Gandebe and Anthony Bouthier combined allowing Goosen to dot down but Paillaugue conversion hit the post making it 17-18. The 62nd minute saw Ford's attempted drop goal go wide and Montpellier also lost points with Handre Pollard missing a three-pointer in the 72nd minute but they did well to hold on to their one-point lead as they completed a thrilling title victory.