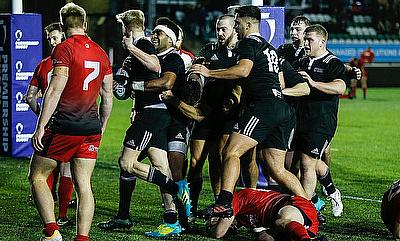 Over the last two weeks, rugby union’s concussion crisis has continued to develop.

More former players have come forward to join the legal process against the sport’s governing bodies for alleged negligence, and a letter of claim was delivered to World Rugby, the Rugby Football Union and Wales Rugby Union last Thursday.

The group of ex-professionals, including World Cup winner Steve Thompson, feel they were not protected from the risks of concussion during their playing days, and they believe repeated blows to the head have caused permanent brain damage.

Whilst the cases will focus on whether the sport could have done more to look after its athletes, it also shines a light on the next steps that rugby could take to reduce the number of head injuries.

Last week, RugbyPass’ Jessica Hayden published an interview with Dr Elisabeth Williams, a senior lecturer in forensic biomechanics and research scientist at Swansea University, who has been monitoring head injuries via sensors in gumshields which are worn by the Men’s and Women’s 1st XV’s.

Dr Williams’ research has highlighted the benefits of wearable technologies when analysing concussions and Northumbria University are also focusing their efforts around this particular subject matter.

Sam Stuart, who is currently a Vice Chancellors Senior Research Fellow at the university, is also an honorary clinical physiotherapist and has a PhD in the field of neuroscience. Working alongside Dr Alan Godfrey (an engineer and expert in wearable technologies), they supervise PhD student Dylan Powell (a physiotherapist) to provide more clarity around the topic.

Similarly to Swansea, Northumbria are basing their research around their elite Men’s and Women’s university teams, but they are using different techniques to create a body of data.

“Our primary sensor is just bigger than a pound coin and we stick that on the skin on the lower back. We also have research grade devices which are on belts and go around various parts of the body.

“The students also wear eye-trackers when they do the walking and the balance tests so they can pick up on the deficits there and then we do specific eye-tracking seated tests as well. We are also looking at remote monitoring so you can track a players’ recovery in terms of balance and mobility, for example. We have a huge battery of tests with players and more so than any top-flight professional team!”

Before Stuart discusses the importance of the tests which 100 players from the university are undergoing [when Covid-19 doesn’t intervene], he explains his reasons for pouring his research time into this area.

“When I was playing for a local club [Consett RFC], I went into a contact situation, and my head hit the top of someone else’s head and it dented my forehead,” Stuart adds. “At the time, I was a bit dazed, and I wasn’t unconscious.

“The physios then said ‘you’re off and you need to go to the A&E department because it looks like you have fractured your skull.’ When I got there, I was told by a doctor that ‘with rugby players, when you get a head impact, it just swells up around the impact site so you should be fine’ and they sent me home with just a concussion card!

“They said if the swelling doesn’t come down in a week, then come back! A week later, it was still fractured. I saw a senior doctor and he said I’d fractured my skull! The next day I had plates put in, so that was my experience of it. That sparked me off to look into it more because we really haven’t progressed since then.”

This is in no way a scathing criticism of the current protocols which are in place. Stuart understands the challenges which medics have when it comes to head injuries, but by creating a series of tests and wearable technologies, it should give clinicians access to more information.

Interested to know about the Comparison of head impact measurements via an instrumented mouthguard and an anthropometric testing device? Check out the work from @LizWilliams101 and colleagues https://t.co/BRrRKNlnUl

With the latest England Professional Rugby Injury Surveillance and Prevention Project also revealing over a fifth of all elite players in the men’s game suffered at least one match concussion during the 2018-19 season, any extra data would surely reduce the number of head injuries.

“The stuff that we use at the minute as physiotherapists and medics who do the assessments around concussions, particularly in contact sport, are essentially just pen and paper tools,” Stuart says. "It relies a lot on clinical judgements.

“Largely, they are useful but the problem is they are subjective and often we miss very subtle signs of having a concussion injury and the important sub-concussive, repetitive knocks to the head. You might do the balance assessment or repeat back some words and people might perform well on those. They might miss a few things, but you might not think that is severe enough to suggest that is something that denotes a concussion injury. There lies the problem, though.

“Because it is a clinical diagnostic condition, it is difficult then to diagnose somebody if the tools we are using are not fit for the purpose we are using them for. All we are talking about here is more sensitive tools, such as wearable technologies, so clinicians can use them to make more informed decisions around the specific individual.”

One aspect of Northumbria’s research, which may offer a different method of monitoring collisions, is through eye-tracking. Stuart explains why this is a vital part of their studies: “The thing is eye movements are actually very good tests, a bit like balance and walking tests, because they are so integrated with a lot of areas and processes within your brain. It means eye movements can be affected quite rapidly by a concussion injury.

“The eye-tracking assessments can really lead to subtle problems being detected because we are talking about velocity of eye movements to a degree of movement. Different pathways control them in the brain and we can track that. We are using what we call a relatively low-cost tracking device from pupil labs to do some mobile data collection with some of the players.

“We have instrumented the VOMS [Vestibular/Oculomotor Motor Screening] test that we do pen and paper wise and we are doing that with the eye tracking device so we can see if there are any deficits which people come up with.

“Eye-tracking is so sensitive that we can pick up on cognitive deficits in older adults years before they start to show those cognitive deficits on some of the rating scales we have. They are a good tool for diagnostics and predictions of outcomes as well.”

With all of the various tests that Northumbria are performing on their university rugby players, the data stored on the wearable technologies or sent back to devices is accessible and, crucially, independent.

There is an argument to suggest the attention should be on the top level of the sport, but Stuart highlights why this presents some challenges as well as potentially “biased” research.

"This is quite clearly only down to rugby. I am 30-years-old. I'm not going to have symptoms of natural brain issues at this stage if it wasn’t for that."

Former Dragons centre Adam Hughes spoke to TRU about the head injuries which led to his retirement.https://t.co/zZ4Pk6M9tM pic.twitter.com/7yf6ztq4ZD

“At the top level, largely you have got to have their [the governing body’s] say-so to even test with Premiership rugby players and that can lead to difficulties for people who are trying to do very independent studies.

“It is one of the reasons why we chose, with Dylan’s project, not to involve an outside organisation and do it in-house in the university because that way, we are still looking at quite an elite rugby population who we have access to on pretty much a daily basis. It does really provide us with a good scope to get data from. Essentially, these things we find should carry over into those higher sporting arenas as well.”

According to Stuart, a collaboration of evidence will also allow the research to move into those ‘higher sporting arenas’. Alongside Dr Alan Godfrey and colleagues from Swansea University, Stuart helped launch the Traumatic Brain Injury Network to create a diverse and multidisciplinary platform for experts to share their findings as they look to better predict, assess and treat mild TBI (mTBI).

To do this, Stuart and Godfrey have connected with 16 other universities: “The reason for this is because really, I can do a research project by myself, but I am not going to change the world on my own!

“I need a lot of people to be involved. Eventually, what we want for our project are quite comprehensive measures, but once we get a bit of a battery of measures which we know are problematic, we can then potentially span that across the 16 universities to expand our projects so every single university is doing the same thing. There needs to be that level of standardisation around the use of technologies otherwise researchers will be using different sensors or techniques and that may impact the measures taken.

“With any research, you will need a lot of information to change clinical practice and change the way sporting bodies make rules.”

Whilst Covid has pushed the pause button on Northumbria’s research, the work which they and other institutions such as Swansea and Durham are conducting is encouraging when looking at the future of player safety.

Stuart was keen to stress more research needs to be done because making more informed choices around head injuries remains a number one priority in the sport.

“I think the concussion cases we have seen is nothing to do with not wanting people to play rugby or that we don’t want people to play contact sports,” Stuart says.

“The case is, if it was a musculoskeletal injury which people can see, you would be like they have to come off and recover properly before they go back. Concussion injuries, because no one can see it or see any of the problems people have, they just expect them to go back because there is ‘nothing wrong with the player.’ These are things that can potentially have long-term lasting problems for people.

“Rugby has done a lot more around this than a lot of other sports, but what we really want to do is make people more informed whether that be the young players, the viewers of the sport, whoever about the risks of what concussion might lead to. I don’t think it will stop people playing. If people want to play, they will play, but it is just that they will know about the risks they might get from a head injury. That is the influence we want to have as researchers."