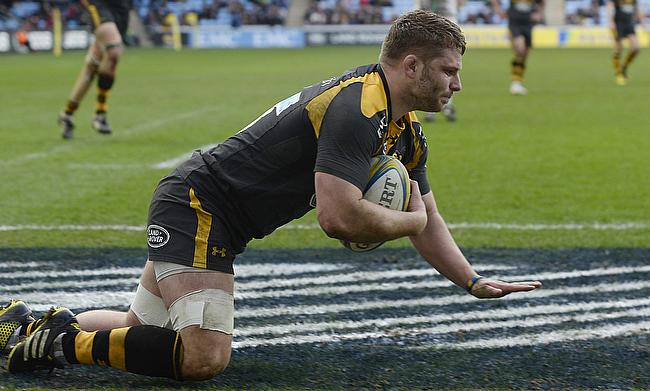 Both scrum-half Dan Robson and flanker Thomas Young scored two tries and the latter's late second deprived Newcastle of a losing bonus point after they had battled back from 27-13 down.

Andy Goode's final appearance for the Falcons on a short-term contact came when he was brought on for the final 10 minutes and while he orchestrated a spirited charge, Newcastle came up short.

Wasps were under severe early pressure with Newcastle going to the corner four times with penalties in the 22.

Despite two warnings to the Wasps forwards from referee J P Doyle, there was no yellow card, George Smith being extremely lucky to avoid the sanction.

Even worse from Newcastle's point of view was the fact they came away empty-handed despite charging runs from Nili Latu, Taione Vea and Marcus Watson, while a head injury to scrum-half Micky Young saw him replaced by Sonatane Takalua.

Newcastle did get on the scoreboard in the 15th minute with a Mike Delany penalty when Wasps infringed following a line-out.

They then had to withstand some inspired Wasps handling, including a Rob Miller break in midfield which they only just managed to defend, albeit at the expense of a 24th-minute Jimmy Gopperth penalty which levelled the scores.

Wasps then showed why they are the form team in the Premiership with two tries in three minutes, Smith sidestepping the defence from 10 metres out in the 27th minute.

Scrum-half Robson's curving run brought another touchdown on the half hour, Gopperth converting the first to make it 15-3.

It seemed Simon Hammersley had pulled seven points back with a try under the posts, but the referee decided there had been obstruction in midfield after checking the big screen.

Then, in first-half stoppage time, Newcastle mounted a pulverising series of pick and drives which ended with prop Vea crashing over. Delany's conversion made it 15-10 to Wasps at the break.

The Falcons started the second half much as they had the first with their pack blasting away, backed up by some pacey running from Watson and Hammersley.

When Vea was stopped right on the line, Newcastle squeezed a penalty out of the scrum and Delaney's 50th-minute penalty made it 15-13.

But then Wasps again scored two tries in three minutes with Robson pushing the ball against the post protector for his second try in the 55th minute - Gopperth hit the post with the conversion attempt but then made amends with a scything break to send in flanker Young.

This time he would not miss the extras and Wasps had a 27-13 lead in the 58th minute.

It looked too much for Newcastle to come back from but they did try by chasing down the ball and turning it over for Chris Harris to cut through and send in George McGuigan for a 66th-minute try which was converted by Delaney for 27-20.

With 10 minutes left Goode's emergence for his final Falcons appearance was greeted by prolonged applause from the 6,725 crowd, and he nearly opened up the Wasps defence with a typical chip kick.

It sparked a series of Newcastle attacks with Latu, Harris and Sinoti Sinoti battering away, but Wasps always looked to have enough in defence.

When Young squeezed over for his second try with just over a minute left and Gopperth converted, it was enough to deprive Newcastle of a losing bonus point.