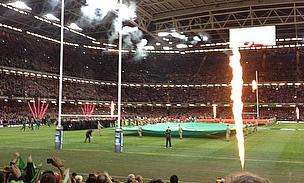 In the final International fixture of the autumn the Green and Gold of Australia travelled to Cardiff and the Millennium Stadium to take on the Six Nations Champions Wales in an old-fashioned North vs. South clash.

However, the home crowd left the magnificent stadium bitterly disappointed as the Wallabies recorded another victory over the men in red, with a 30-26 victory in a fantastic final test of the international year.

It could only ever be agonisingly close, such has been the nature of the battles between these two in recent times.

It came down to the simple matter of whether Wales were good enough to finally win. With territory and possession five minutes from the finish and only four points down, the chance was there and then destroyed.

George North took his side into the lead with an early try, which, combined with two Leigh Halfpenny penalties, gave the home side a 13-3 advantage. However, Austrlia then began to find their stride as their game went up a number of gears, with tries from Christian Leali-ifano and Israel Folau before the break.

Joe Tomane extended the visitors lead, before a second try from North and a Rhys Priestland penalty gave the Welsh a fighting chance with just a few minutes to go.

Despite losing the enigmatic Quade Cooper – who was exceptional on the day – for the final five minutes, the green and gold managed to hold on for their ninth successive victory over Wales.

Once again, the Welsh have struggled to convert impressive Six Nations form to success over the big three southern hemisphere sides. The result marked the Welsh’s 22nd defeat in 23 tests against South Africa, New Zealand and Australia.

As a result, after Saturday’s encounter, the Welsh are the only international side to move in the IRB rankings, having now slipped to sixth place, with the French going into fifth.

The game itself was an enthralling contest between two evenly matched sides, both demonstrating brilliant running rugby. There was a real lack of scrums in the first half that helped emphasise the incredible entertainment.

Wales struck first through North’s try, as he pounced on an uncharacteristic mistake from experienced campaigner Adam Ashley-Cooper, hacked the ball through and then crossed the line in the left corner.

Halfpenny added the extras and then a further penalty to give the home side an unanswered 10 point lead. The full-back then restored the 10 point lead after Leali’ifano got Australia off the mark with a penalty.

However, the raucous Welsh crowd were soon silenced as Quade Cooper marked his 50th cap with an incredible performance, which overflowed with silky hands, darting breaks and fantastic offloads.

The enigmatic 10 made a pass around the back land in the hands of right wing Tomane, who found Leali’ifano on the inside for the equalising score.

The inside centre converted to make it 13-10, but Halfpenny missed a chance - only his second failure in his last 20 attempts - to extend Wales' lead when a further penalty attempt came back off an upright.

The full-back then relinquished the goalkicking duties to Dan Biggar, who landed a penalty to make it 16-10.

But the Wallabies oozed attacking menace, Cooper repeating his earlier trick after standing up Sam Warburton and then releasing another sublime pass to Tomane.

Wales managed to hold off the Australian advances after an interception from Ian Evans just metres before the whitewash, and then Biggar for hauling down Folau. However, the fly-half was sin-binned for not rolling away after the tackle and Folau made the most of a second attempt, as he barged through a poor Mike Phillips tackle from close range.

The conversion gave the Wallabies the lead into the half, and it was more of the same as the players resumed for the second half.

Early on Leali’ifano added a further two penalties for the visitors, to make the score 30-16 after Tomane scored the visitor’s third try.

Although well a drift, though, the Welsh rallied in impressive fashion. George North crushed through the Aussie backline, barrelling his way over the whitewash with an incredible show of speed. The conversion was easily added alongside a Priestland penalty which pulled the home side within four points.

Cooper was sin-binned for holding back Scott Williams, leaving Australia with 14 men for the final five minutes. However, Wales, despite a final flurry, could not capitalise on the man advantage and fell short to a southern hemisphere side once again.

After the game Welsh Captain Sam Warburton said that although the victory was disappointing, it’s not a setback.

The flanker said his and his side’s attention has already been shifted to the Six Nations which begins in February:

"It is not a setback," Warburton said.

"Everyone is looking at the World Cup, but two years is a real long time to when that comes around.

"The motivation for the players today (Saturday) was not having one-up on Australia for the World Cup pool. It's a long way away.

"Our focus already turns to the Six Nations. No-one has won the Six Nations three years running, and that will be the target for this group of players moving forward," added the flanker ahead of Wales' tournament opener at home to Italy on February 1.

Gatland added: "It was a great game of rugby if you were a neutral or an Australian. It was a real Test match out there."

"We are knocking on the door. The thing is with the southern hemisphere now, which is different to the past, is that they are coming here fully loaded and not making changes."