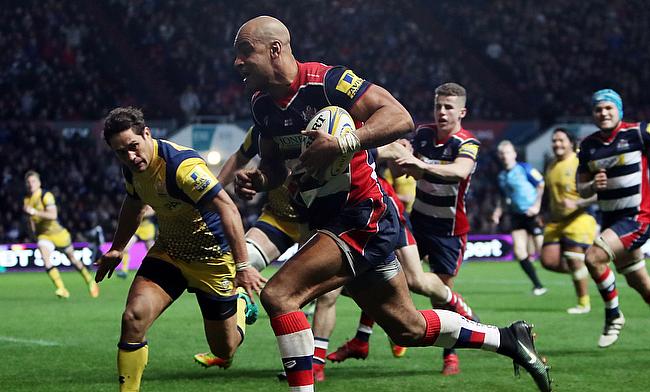 Wing Tom Varndell starred with a hat-trick of tries as Bristol registered their maiden Aviva Premiership victory this season after they outscored Worcester Warriors 28-20 at Ashton Gate on Monday.

The victory came for Bristol despite they were reduced to 14-men by the 12th minute when Tusi Pisi was sent-off for tackling Worcester Warriors fly-half Jamie Shillcock in the air.

Varndell's first try came in the ninth minute after fullback Jason Woodward and Shillcock exchanged penalties. The Bristol fullback added the extras to take the lead to seven points.

A penalty from Pennell reduced the gap to four points and soon lock Darren Barry strolled past the line in the 20th minute to take Worcester Warriors to three-point lead.

The lead swung once again in favour of Bristol when Varndell crossed over for the second time and Woodward scored his second penalty following Barry's sin-bin to take home team to 18-13 lead at half-time.

Woodward's penalty in the second half stretched the gap to eight points. Even though Dean Hammond's try and Pennell's conversion brought Worcester Warriors back into the game reducing the difference to one point, Varndell touched down for the third time to seal an eight-point win for Bristol, which is also their first this season.

Despite, the win Bristol continue to languish at the bottom of the table but have reduced the gap with Worcester Warriors to two points.