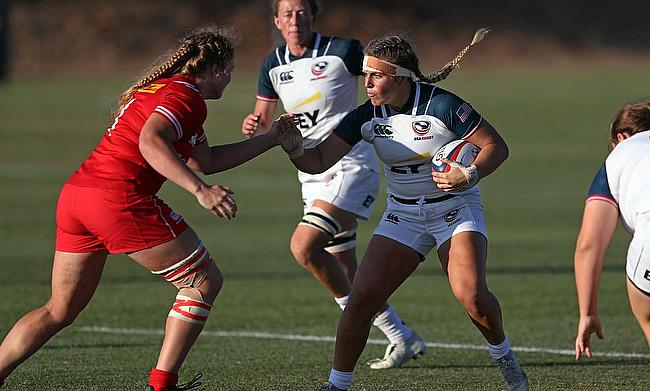 USA Women overcame a double from Olivia DeMerchant as they edged out Canada 18-20 in their Super Series encounter at Chula Vista Elite Athlete Training Center.

DeMerchant gave a head start to Canada with a fourth minute try and Sophie de Goede kicked the conversion. Alev Kelter led USA's response with a three-pointer in the 12th minute but Canada looked in control with a second from DeMerchant in the 14th minute. de Goede missed the conversion but kicked the penalty to make it 15-3.

Just as the half-hour was approaching, Emily Henri scored the opening try for USA but Kelter missed the conversion. De Goede with another penalty kick in the 29th minute ensured Canada had an 18-8 scoreline before the break.

With the third quarter going without a point Kelter with a converted try brought USA back into the game while Kris Thomas' touchdown in the 72nd minute ensured they sealed a two point win.

“The excitement was just tangible, we could feel the energy going into the game actually, in warm ups even,” said try-scorer Heinrich. “We were all talking about it and it just kept our nerves calm. It’s amazing to win, especially against Canada who is such a talented team. It’s been nice, it was the build-up of the past two games going into this one to get the victory.”

Canada number eight De Goede added: “We’re really disappointed to finish this on a loss. We came here to play our best rugby and I don’t think we did that today.”

USA Rugby files for bankruptcy due to financial constraints