USA can be competitive ‘with anyone in the world' 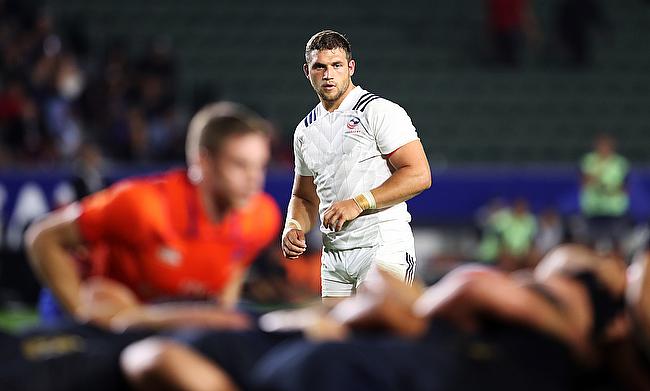 In May 2017, Bryce Campbell was named as the best player in collegiate men’s rugby. Two years on from receiving the prestigious Scholz Award, Campbell is at a Rugby World Cup, lining up opposite England, France, Argentina and Tonga.

It has been a meteoric rise, even though many will be unaware of it. Making his senior debut for the USA in 2016, one week after turning out for the Selects side, Campbell has been an integral part of the Eagles’ rise to the forefront of World Rugby.

Playing at outside centre for the USA in their historic victory over Scotland last year, Campbell was one of many players made newly professional by the introduction of Major League Rugby. Playing for the Glendale Raptors, who reached the Championship game in the inaugural season, Campbell’s skills were recognised by none other than London Irish who he played the majority of the games for as they regained their Premiership status.

“It (Major League Rugby) has made a massive impact on our team,” Campbell started. “This World Cup team is 100% full of professional players and I don’t think any USA team has had that before. MLR has allowed a lot of guys to play professional rugby week-in week-out and to be involved in a professional setup.

“I think that just shows throughout the team in how professional we are and how confident we are in all of our teammates to perform. It also gives a lot of other people in the US something to watch and kids something to strive towards.

“It’s kind of been a step by step thing for me. I have been really blessed to have the opportunities that I’ve had thus far with my development. MLR with Glendale was awesome, but then to step up and play for London Irish in the Championship was special. I feel really confident now, being here at the World Cup to perform, then go back to London Irish and see where we go from there.”

The USA squad was one of the last teams to fly out to Japan, basing themselves in Okinawa in the lead up to their first pool game against England on Thursday. The island is placed in between the large southern island of Japan and Taiwan, meaning it is well removed from the media circus currently following many other World Cup sides.

“We arrived in Okinawa last week and it’s really nice to ease our way into things, not too much media exposure, a really nice hotel, the people here have taken care of us so well and it’s been pretty low key to be honest,” Campbell said.

“it’s nice for us just to be able to focus on our training and meshing at a time like this, before we hit the storm in Kobe in a couple of days.”

Upon arrival, the Eagles squad learnt quickly that Okinawa was home to two large US military bases, making their pre-World Cup location feel just like home: “We’ve met quite a few people that will be supporting us. On one of the bases, they’ve got a rugby team as well, so it has been really nice meeting other Americans in an unexpected place.”

Just when you think you've got a man down, Bryce Campbell swoops in for the offload and scores. #ARC2019 kicks off Feb 2 and we've got 3? games in USA.

Gary Gold’s Eagles will be one of the last teams to kick off their World Cup campaign in Japan. Having watched all of their pool opposition over the weekend, Campbell says that viewing the opening games has helped them in their preparation, but they are mainly focusing on themselves.

“We’ve had time to watch the teams and adjust our game plans if needed,” Campbell said. “It has been a bit weird because we are down here in Okinawa and we’ve just been focusing on what we need to do. I think, more than anything, we’re excited to go out and put a good performance together that we’re proud of.

“I think that if we stick to our game plan, we can be competitive with anyone in the world and there’s no better team to fight than England in a couple of days to see where we’re at.”

It is Gary Gold that has masterminded the USA’s rise since he took up his Head Coach role in 2018. Campbell, along with many of his teammates that TRU has spoken to in recent months, have nothing but praise for the South African.

“He’s been great bringing us together, he’s been really consistent with how we train and how well we prepare. He’s really straight forward in the way he coaches, and I think he has been massive in our development over the past year and a half.

“He has been a great leader and he’s shown us that we can make really special things happen when we stick together. He has more faith in us than anyone else in the world to go out and perform. That’s what you want from a coach, someone that believes in you, and he does.”