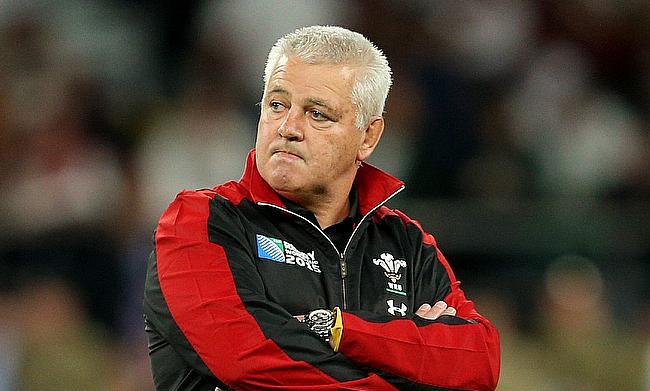 Wales opened their World Cup campaign by scoring six tries as they beat Georgia 43-14 in Toyota.

There will be greater challenges ahead for Wales in this Rugby World Cup, but this was the perfect response from Warren Gatland’s side after a difficult week.

The Grand Slam champions would have been rocked by the departure of assistant coach Rob Howley following alleged betting offences, but as Gatland desired, Wales did their talking on the pitch as they opened up their World Cup account with a clinical display against Georgia.

Before their warm-up matches, Wales were on a 14-game unbeaten run and there were a few question marks hanging over the Six Nations winners after losing to England and then Ireland on two occasions.

The news surrounding Howley put Wales under further scrutiny as the rugby world watched on to see how they would react, but Gatland's men answered emphatically with their highest margin of victory since November.

Josh Adams at his flying best for @WelshRugbyUnion

Their first-half performance was dipped in maturity and it took Wales just two minutes to get the ball rolling as Jonathan Davies carved open Georgia following quick-ball from an excellent Wales scrum. Gareth Davies had numerous options to choose from, but the centre latched on to his flat pass to score Wales’ 18th try of 2019.

Dan Biggar surprisingly slammed an easy conversion against the posts and after basing their Six Nations success on solid defence, Wales' attacking flair was certainly on show in the opening 20 minutes.

Georgia were also playing into Wales’ hands. They were uncharacteristically poor at the set-piece and a sloppy kicking game allowed Wales the freedom of Toyota City, but it was from another scrum where Gatland's side scored their second try.

It was a move finished off by the outstanding Justin Tipuric with Biggar, Josh Adams and Gareth Davies all involved.

It was all too slow in defence from Georgia and they were left flat-footed as Adams darted through the yawning gaps to score Wales’ third try after a slick line-out move.

Georgia then seemed to spark into life after 20 minutes and rather than loosely kicking for terriorty, the Lelos remained patient with the ball in hand and started to exert pressure on the Wales defence.

Milton Haig’s side didn’t string more than five phases together in the first 25 minutes, but finally the random screams from the crowd for Georgia’s attacking intent were vindicated.

Giorgi Tkhilaishivili and Shalva Mamukashivili combined to allow the Lelos to set-up camp in Wales’ 22, but Shaun Edwards would have had a smile on his face as for all of Georgia’s efforts, Wales held firm in defence as Giorgi Kveseladze knocked on.

After finally getting a foothold in the contest, Georgia would have been bitterly disappointed to concede a try on the stroke of half-time. A lovely wrap around from the excellent Gareth Davies allowed Jonathan Davies to fling the ball out wide and Liam Williams gathered well to dot down in the corner for the bonus-point score.

Gatland and Wales would have been very satisfied with their first-half performance, but whatever Haig and forwards coach Graham Rowntree had said to their Georgian side at the break immediately worked following the restart.

.@WelshRugbyUnion head coach Warren Gatland on his sides performance after 43-14 win over Georgia at #RWC2019#WALvGEO pic.twitter.com/rjbj4s96bK

Mamukashivili’s score initially came from a turnover from kick-off and a trademark, well-worked rolling maul allowed the hooker to barge his way over.

Wales so nearly responded with a beautifully worked try. From a great driving maul, Liam Williams couldn’t latch on to a cross-field kick. The Saracens man failed to get the final touch but Georgia were reduced to 14-men when Jaba Bregvadze was shown a yellow-card by referee Luke Pearce for collapsing the orginial maul.

The Grand Slam champions were keen not to take their foot off the pedal with Australia to come on Sunday, but despite having a man disadvantage, Georgia continued to gain confidence from shutting Wales out.

Wales' second-half display was not as sparkling as their performance in the opening 40, which disappointed Gatland, but it was clear Georgia's urgency and intensity had improved. However, the Lelos would concede the next try as Tomas Williams dotted down after anticpating George North’s kick.

Georgia continued to fight and their endeavour was rewarded as from a poor Wales scrum and a quickly taken penalty, Levan Chilachava dotted down on his 50th appearance for the Lelos.

But it was Wales who had the final say as a superb kick-chase and tackle from Tipuric, followed by quick feet from Tomos Williams, allowed North to finish off his first real chance of the match.

This will be Gatland’s last hurrah as Wales head coach and after this bonus-point victory to begin his final World Cup campaign, all eyes now turn to Tokyo as his side renew their rivalry with Australia in a likely Pool D decider.