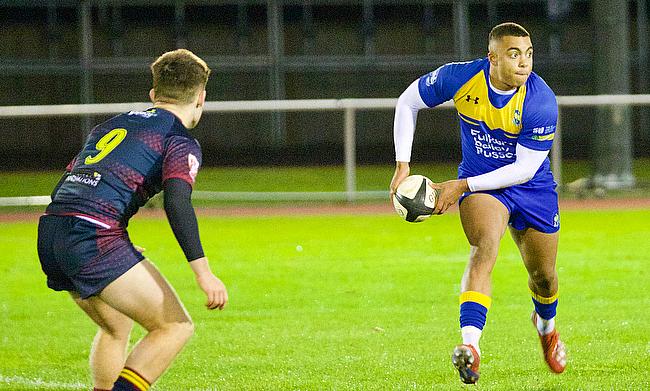 On the pitch, the race to be the best university side in the country is heating up as we enter the final stretch of the season and the quality of rugby on show is a testament to the progress of the top tier.

Followers of the university game have also consistently banged the drum about the pathway BUCS Super Rugby offers young athletes, especially when names such as Sam Skinner, Alex Dombrandt, and Josh Hodge crop up in conversation.

Players are flourishing on the university stage and it is clear BUCS Super Rugby is adding a further level to their development.

Take Durham University’s Jack Hill and Josh Basham, for example. Both players have been selected in the Scotland and England squads, respectively, for the U20s Six Nations Championships whilst the University of Exeter’s Richard Capstick scored England’s winning try in their dramatic opening victory against France last weekend.

A university player making the next step up the rugby ladder?

It is becoming a well-trodden path and Durham's Jack Hill is one of the latest to do so. #BUCSSuperRugbyhttps://t.co/UKDZ9ZVwmz pic.twitter.com/X6a48RRU4h

One player who was also part of Alan Dickens’ triumphant side was the University of Bath’s Max Ojomoh, with the centre certainly impressing in Grenoble.

And as a fresh addition to the U20s set-up this year, University of Bath Head of Rugby Aaron James has been delighted with Ojomoh’s impact.

“From a University of Bath point of view, we are really pleased for Max,” James tells TRU. “He’s come as a first year and he has fitted into Bath university culture and contributed really well to the first team when he has been available.

“We knew about Max through the Bath academy contracts. Craig Lilley is now the academy manager and he was his coach at King Edward’s last year so we had been in contact with Max.

“He was around the university, sometimes even doing hockey! With our links with Bath academy as well as some of our coaches being involved with Max’s coaching from quite a young age, it is great to be part of a pretty good story.

“If we look at how he has got to where he is now, it is Chippenham to King Edward’s School to the University of Bath and Bath Rugby as well as age-grade England recognition. We are proud to be part of his journey so far and hopefully we can continue to help his development so he can be even better.”

Ojomoh, who agreed a senior academy contract at Bath last year, has been named in England’s starting XV for their clash with Scotland on Friday night and it is another milestone for the youngster to cherish.

From the outside looking in, it is easy to suggest Ojomoh was always been destined for a future in rugby in the West Country due to his father, Steve, representing Bath and England.

However, Ojomoh junior has not followed in his Dad’s footsteps as he opted to ply his trade in the backs rather than the forwards and his on-field attributes - which were highlighted last weekend against France - make the 19-year-old an exciting prospect, according to James.

“He is a physical guy,” adds James. “He has got some really good skills. He is quite happy to go hard at the line. He has also got a very good pass and he talks well. He is still a developing rugby player, but he wants to go on to be a full-time professional rugby player at some stage. He is committed to the cause.”

As with any player who is aiming for a career in rugby via the university route, their development both on and off the pitch is key. Cardiff Met Director of Rugby Danny Milton has repeatedly stated the importance of creating holistic athletes and at Bath, that particular mantra is no different.

The likes of Tom Doughty and Will Britton have been beneficiaries of the ethos, pathway and relationship forged between Bath Rugby and the university in recent years whilst last month, Rhys Davies started for Stuart Hooper’s side against Harlequins in the Heineken Champions Cup.

“Max is a really personable kid,” says James. “Fair play to him, he is very well self-managed because he is managing three rugby programmes with Bath Rugby, University of Bath and now England U20s.

"My advice would be to grab university rugby by both hands and run with it as fast as you can!”

Two weeks ago, @tomdunn92 made his 100th appearance for Bath & he believes his time with @TeamBath was a key part in his rugby journey. ??https://t.co/FuEgOhrHx6

“He is also studying a business degree so it just highlights the character that he is and he is a great example of our local pathway.

“He has grasped every opportunity. It is a great advert for local Bath rugby clubs and schools right through to Bath Rugby who obviously lead the pathway. It shows the links and how we develop players right from our doorstep. It highlights the values of universities within rugby development pathways and we want to continue to find and help players moving forward.”

The University of Bath’s partnership with Bath Rugby has also paved the way for players such as Josh Bayliss and Beck Cutting (now of Worcester Warriors) to earn England U20s caps and the relationship between the two institutions is continuing to go from strength-to-strength, with Ojomoh being a shining example.

In terms of results for the University of Bath this season, James’ charges haven’t enjoyed a successful campaign thus far.

Having reached the BUCS Super Rugby semi-finals in the last two seasons, the Blue and Gold find themselves in eighth place but whilst results haven’t been positive, James admits Bath are going through a mandatory transition which will benefit the university in the long term.

“As they say in university rugby, we are experiencing one of those years,” James says. “It is what it is, but we have got very good players. The results may not show it, but our morale is good.

“What’s been the most frustrating thing is that we are beating ourselves in a lot of things. We are just frustrated with the mistakes which have been giving teams other opportunities and what we know is that we can fix them.

“We are very motivated for that so even though our results haven’t been ideal, when you are walking around and going to training, it doesn’t necessarily feel like that.

“We have given probably more Super Rugby debuts in the last three or four months than we have in the last two years! They will gain a lot of experience from this and it is going to put us in good stead going into next year.”