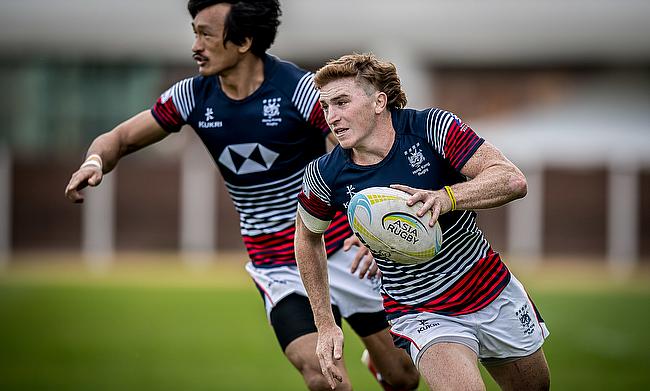 Speaking in the wake of their heart-breaking loss to South Korea, that would have ensured the nation a place at the 2020 Olympics in Tokyo, Hong Kong Sevens player and former University of Bath student Hugo Stiles chatted to Joe Harvey about the attraction of moving back to Asia and his time playing student rugby.

“I moved to Hong Kong when I was about seven from Southend-on-Sea in Essex,” Stiles said.

“I never really touched a rugby ball, was more of a footballer, then when we’d moved out here, a mate said that I had to come down to rugby training. From then on, I fell in love with it.

“I went along the ranks, started to get amongst the national age grade stuff and kept going up and up until I had graduated from secondary school. I decided to take a gap year and that’s when I first joined the sevens team professionally. I made my debut in Tokyo against England and Fiji and after that year I went to Bath.”

Capped for both the sevens team and the 15s side, Stiles came to Somerset with an impressive amount of experience. Playing two consecutive seasons before returning to Hong Kong for his placement year, then returning for a third and final campaign of BUCS rugby, Stiles played a major part in Aaron James’ squad during his time in Blue and Gold.

Capable of playing in multiple positions across the backline, Stiles proved a threat in both attack and defence. Despite cutting a diminutive figure on the field, the 23-year-old really packs a punch. Online videos can be found of Stiles taking down opposition players seemingly twice his size.

Winning an Asian Games gold medal during his placement year with the Sevens side, Stiles admits that the possibility of attending an Olympic Games tempted him back to Asia.

“It was always in the back of my mind and I knew I had the opportunity to come back and it wasn’t the worst opportunity because, well, the Olympics were in sight,” Stiles said. “It seemed, kind of, stupid for me not to come back.

“I was talking to a few clubs in the Championship, but because I am capped for Hong Kong, it makes me a foreign player. So, that has made it harder for me to come out and play in the UK, which is a bit annoying, but it’s part and parcel.”

Originally bound for either Exeter or Edinburgh, Stiles’ move to Bath proved a fruitful one for him as his reliable kicking made the versatile back one of the standout players at the top table of university rugby.

At Bath, he did fail to get past the semi-final stages of BUCS competition in each of his three years with the team, but Stiles says that whilst each heartbreak has helped him, nothing comes close to missing out on an Olympics.

“I can’t say that I’ve had a tougher loss than the one at the weekend, but you definitely learn from your losses and hopefully I’ve learnt from my most recent one,” Stiles said. “I feel from my first year to my last one (at university), we definitely had our best year in my final year.

“They just need to find the right balance between the academy lads slotting in and slotting out. It is quite hard to find a balance at Bath. Then boys start going off on placements and that doesn’t help whereas you look at Exeter, they play with each other for first year, second year and then when they hit their third and final year.

“They’ve already had a couple years playing with each other and they’ve stuck together, and I think that’s what Bath struggles with and it does show a bit because the team changes year on year quite a lot compared to other teams.”

Having given up his British passport in order to play at the Asian Games, Stiles is very much a child of Hong Kong. He admits he is constantly urging his former Bath teammates to come to Asia in order to represent one of the many prestigious teams on the island, ideally with the view of playing for the national team when they qualify on residency grounds.

“Pat Jenkinson, who played GB uni sevens, he’s come over and plays for the Hong Kong Football Club and he is loving it,” Stiles added. “He’s got a job at one of the banks and plays club rugby, playing twice a week and living in Hong Kong is not the worst gig.

“It is now harder for the lads because of the change from three-year rule to the five year rule, but then you can find gems like (Tom) Bristow who were born in, or have some connection to Hong Kong, can literally come over here in a heartbeat and play for the national side.