TRU's Gallagher Premiership XV of the week: Round 6 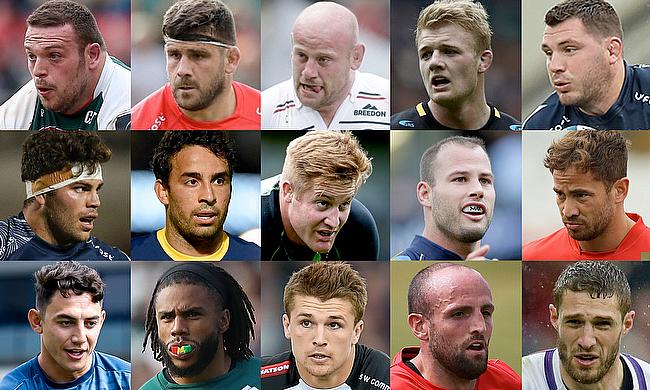 With the first section of Gallagher Premiership fixtures all done and dusted before European Rugby takes centre stage for the next couple of weeks, Joe Harvey highlights some of his standout performers from Round Six.

1. Greg Bateman (Leicester Tigers) – A Premiership stalwart, a lot of Bateman’s excellent work goes unnoticed in good Tigers performances. In the game at Twickenham, Bateman was instrumental in shutting down Saints at the scrum.

The experienced prop stopped young-buck Ehren Painter in his tracks, despite the former Cambridge man’s 15kg advantage over Bateman. This is what gave Leicester such an advantage in the game. The forward dominance is what gave the Tigers the basis to go on and win the game.

2. Rob Webber (Sale Sharks) – In what was a very forwards oriented game for Sale, Webber was a key defensive lynchpin for Sharks as they overcame a first half deficit to condemn Falcons to 12th in the table.

Making 12 tackles in the game, Webber is known for his reliable throw-ins at the lineout and put in a very solid performance that see’s him make the team of the week.

3. Dan Cole (Leicester Tigers) – Much like Bateman, it was Cole’s scrummaging that gets him into this team of the week. Putting so much pressure on the shoulders of Alex Waller and Dylan Hartley, it resulted in Northampton infringing at the scrum often.

Added to this, Cole had a surprisingly good game in the loose. Only making two meters from two carries, Cole still made 11 tackles, but what was so important was the two turnovers that the England prop made which meant Leicester got possession back at important times.

4. Dave Ribbans (Northampton Saints) – Despite being in the losing side in this game, Ribbans was the shining light in a poor Saints performance. Carrying supremely well for each of his 17 attempts with ball in hand, Ribbans had a well-rounded performance.

Tapping and going, as well as causing a turnover, Ribbans showed that he was capable in every facet of the game. Added to this, he scored a try and with Dom Barrow yet to return, the Saints second row could be a force to be reckoned with.

5. James Phillips (Sale Sharks) – Like Webber, Phillips is another former Bath player who seems to be enjoying his time at the AJ Bell so far as he made an impressive 12 tackles against a Falcons side who were difficult to break down.

Added to this, Phillips even got over the whitewash for a try that contributed massively to Sale’s fightback in the second half.

6. Jono Ross (Sale Sharks) – What is there to say about Jono Ross. Renowned for his tackling effort and defensive capability, Ross was in fine form on Saturday afternoon.

Making an astounding 23 tackles, it was an example of a great display from the Sale captain. An attacking workload of 15 carries to make 49 metres, it’s amazing to think that Ross played the entire game. Hard as nails.

7. Marco Mama (Worcester Warriors) – Mama was given the man of the match for his performance against the club that gave him his first opportunity in professional rugby.

Playing the full 80 minutes, Mama scored a try, got a turnover and made 33 metres against Bristol Bears, but it was the amazing 28 tackles that puts the Zimbabwean above everyone in the Warriors team.

8. GJ van Velze (Worcester Warriors) – A former Northampton Saint, van Velze didn’t put in as many tackles as his back-row teammates, but did get two turnovers for Worcester, stopping Bristol in their tracks.

In addition to this, Worcester’s captain contributed to the attack with a try after 10 carries in which the South African made 34 meters.

9. Francois Hougaard (Worcester Warriors) – Now that Hougaard has said he won’t play for South Africa, it means that Worcester get to see their best player week-in week-out.

Putting Warriors on the front-foot at every ruck, the scrum-half even got a turnover as Warriors put 52 points on the visiting Bristol.

10. Danny Cipriani (Gloucester Rugby) – Going to your former club and putting in a man of the match performance is why September’s player of the month is in this side.

A major part of Ben Vellacott’s try, as well as Charlie Sharples’ two efforts, Cipriani also kicked well from the tee and dominated his opposite number, Billy Searle. It is games like this when you can’t believe Cipriani seems to be out of the reckoning for England.

11. Bryce Heem (Worcester Warriors) – Getting himself another try, Heem was influential yet again out wide. The winger made four tackles at Sixways and even got himself a turnover, proving that the New Zealander can do it all.

Added to this, he made 78 meters from just the nine carries and Heem kept the Warriors on the front foot every time he got the ball in hand. When Worcester play like they did at the weekend, Heem always seems to be involved.

12. Kyle Eastmond (Leicester Tigers) – Linking up with George Ford reliably yet again, Eastmond had a quite phenomenal game at Twickenham. Usually known for his attacking prowess, Eastmond’s game will largely be remembered for his defensive efforts.

A diminutive figure, Eastmond’s rugby league background came in handy against Saints. Making 10 tackles, Eastmond ended the game with a whopping four turnovers attributed to his name. This proves what a good player Eastmond is and how important he will become after Matt Toomua heads back to Australia full-time.

13. Henry Slade (Exeter Chiefs) – Slade has probably been the most outstanding English player in the Premiership so far this season. In this game against semi-local rivals Bath, Slade may not have scored any tries, or for that matter any points, but he was so influential on the game.

Making a phenomenal 134 meters on Friday night, Slade kicked to the corner in spectacular fashion much like he has done so far this season. On top of his fantastic attacking game, Slade really contributed to the Chiefs defence with 11 tackles made.

14. Charlie Sharples (Gloucester Rugby) – Back in fine try scoring form, Sharples added another two scores to his tally against Wasps. Only making 45 meters in this game, Sharples was very opportunistic for his tries.

His first score showed the pure pace that Sharples possesses, as well as his support of Tom Hudson as fullback and the second try was similar, with the England winger supporting his teammate well again to get his reward.

15. Jonah Holmes (Leicester Tigers) – Not usually known for playing in a 15 shirt, Jonah Holmes shone at fullback for Leicester Tigers at Twickenham. Doing the rounds in his early career, Holmes has played for Rosslyn Park, Henley Hawks and Yorkshire Carnegie prior to his move to Leicester in 2017.

Making a total of 106 meters against Saints, Holmes always seemed to be a threat to Northampton.  Really influential in Ben Youngs’ try, Holmes could even keep Telusa Veainu out of the reckoning when the Tongan returns from injury.