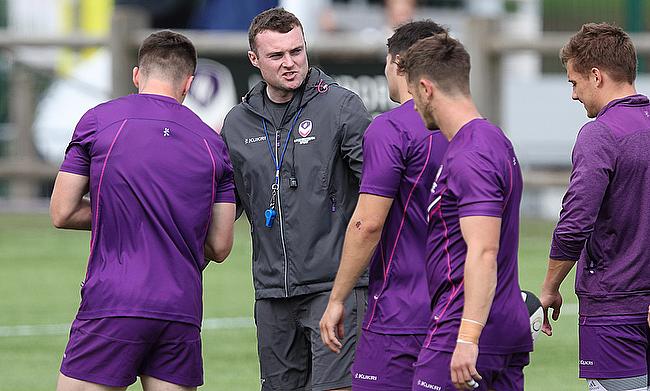 Gerard Mullen made the step into the Allianz Premier 15s from Loughborough in the summer
©stillsport.com

Back in August, Gerard Mullen took charge of Harlequins Women which signalled the conclusion of his time with Loughborough Students RFC.

He spent four years in the head coach role focusing on both the university team and the National League side, but for Mullen, the time felt right for him to take the next steps in his coaching journey.

Seeking a job in the women’s top-flight had not been on Mullen’s radar during his development in Leicestershire but when the opportunity arose to join one of the leading Allianz Premier 15s clubs, it was a chance he couldn’t pass up.

His own personal drive matched the ambition of Harlequins which convinced Mullen to end his long affiliation with Loughborough and make the move down to London.

“I had been at Loughborough for quite a while and really enjoyed my time there,” Mullen tells TRU. “It was a fantastic programme but I was always looking to try and make that move into a new environment.

“I think I made the decision in the knowledge that it would make me a better coach because I think I had got everything out of my time with Loughborough. I was heading into an environment where I’d be working with a great bunch of players, a lot of internationals and I thought working in the women’s game would make me a more rounded coach.

“I hadn’t really thought about moving into the Premier 15s and you probably don’t think you are going to move jobs in a pandemic! At the end of the day, I am not in the coaching game to earn a living. I want to be successful and I am ambitious. You can probably earn better money doing other jobs, but I am passionate about this job with this ambitious club and I want to be the best that I can be. Already just being around this environment at Harlequins and bouncing ideas off all the coaches here, I feel like I am learning more again.”

When Mullen’s appointment was confirmed, plans for the 2020/21 season were still in their embryonic stages. Since then, the league has acquired a new title sponsor, Allianz, and the campaign has been able to begin amid the coronavirus pandemic.

And for Harlequins, they have flown out of the blocks.

Three bonus-point wins from three matches leaves them sitting on top of the pile, but 15 points out of 15 doesn’t tell the full story for the new head coach as the impact COVID-19 had on Mullen’s arrival made the task of settling into a new environment a difficult experience.

Even a few hitches in modern-day technology during his first team meeting also added to the Irishman’s challenges: “We didn’t do many Zoom meetings after that first one as you can imagine!” Mullen says. “I hadn’t had that long with the group either!

“Initially, you weren’t able to get the whole group in a room together to talk and to discuss what I am about or what I’d like to focus on so that was really challenging.

“The group was also spilt to start with so we had people coming in in the day and then another group in the evening because of the restrictions so probably my first month in the job, I didn’t have the group fully together. You are trying to build cohesion and drive a culture so it has been a challenge, but I am just focusing on what I can control now.”

Taking all these challenges into account, Harlequins should be pleased with their strong start to the new campaign. Mullen’s side grabbed the headlines on the opening day after thrashing Darlington Mowden Park Sharks 103-0 before backing up that thumping victory with excellent wins against Wasps and newcomers Exeter Chiefs.

It is easy to suggest that racking up a century of points and seeing his team score a glut of tries would be the most notable result for Mullen, but the head coach was equally as delighted with the triumphs that followed.

“We are very clear with setting our targets for a Saturday and that is what we hold ourselves accountable to,” Mullen adds. “In our first league game, we won by over 100 points. That was great because it is never easy to score that many points so you have got to be doing something well, but we have got to still be challenging ourselves irrespective of the outcome.

“The Exeter and Wasps games were tougher tests. The Wasps game, we were just ahead at half-time and against Exeter, we probably had an OK lead at half-time, but then they had the elements in their favour so I have definitely seen good progression in those games. That is good for us. We conceded early against Wasps and those things are good challenges for us which will hold us in good stead.”

Harlequins will now be hoping they can pick up from where they left off as the Allianz Premier 15s returns this weekend following the conclusion of the Women’s Six Nations. Mullen will welcome back seven of his squad who clinched a second successive Grand Slam with England last Sunday whilst Scottish duo Jade Konkel and Chloe Rollie also return as do Ireland’s Leah Lyons and Anna Caplice.

Quins have been in the ascendency since the Premier 15s was launched in 2017 and their growth has followed a similar path to the eye-catching progress of the Red Roses. Simon Middleton's side have been almost faultless since the RFU introduced full-time contracts into the women’s game and they are undoubtedly one of the favourites for next year’s World Cup in New Zealand.

It is no surprise then to hear how fortunate Mullen feels to have so many standout players at his disposal and he believes his current crop of stars are already acting as an inspiration for the next generation in their own unique ways.

“They are all fantastic ambassadors and it is great to have them here, but I am still conscious that we have got to be building behind them and looking for the next Leanne Riley, Jess Breach, Jade Konkel, Amy Cokayne and all these people.

“People like Shaunagh Brown [who has been nominated for a Sunday Times Sports Women of the Year award in the influencer category] is another one. I love working with her. She is a great person. She brings a fantastic energy to the group 24/7. She could have had a bad day, but she still manages to inspire and bring energy to those around her!

“She is a fantastic ambassador for women’s rugby as are so many in our squad. I am amazed by all the work Rachael Burford does as well. She is incredible. We will be following her Instagram at whatever time of the day and she might be up in Sheffield or the East Midlands coaching a camp, but she still makes it to training and still trains her heart out every time.

“It was also a great sign of strength this week that we had Emily Scott come out in the press to talk about the condition she has. I was unaware of that myself initially and we really celebrated that this week as a group because to have someone in the group who can come out and speak about something personal and how she has dealt with it, is immensely empowering.”

I don’t use my platform to speak out as often as I should, and the decision to finally speak out about my illness has not been an easy one, however it was certainly the right one, and is long overdue.

If it helps just one other it will be worth it.

Thank you to @thesundaytimes pic.twitter.com/ylvuZvXjCs

Harlequins Women are not only showing their inspirational qualities off the pitch, but they are making an impact on it and this weekend’s clash in familiar surroundings for Mullen could provide another milestone for his side during the opening few weeks of his tenure.

They travel to third-placed Loughborough Lightning on Saturday who are the only other team along with Quins and champions Saracens, to secure three wins from three.

A trip back to the Midlands is something which Mullen is looking forward to, but a victory at his old stomping ground would only add to Harlequins’ title credentials as they look to wrestle the crown off Sarries.

“It is a bit of grudge match me going back to Loughborough!,” Mullen laughs. “It will be a bit strange because a lot of people I know there won’t be able to come and watch the game, but in terms of the game itself, it will be a good test.

“The girls constantly remind me that they want to win the league because of how close they have come in the past, though, so no pressure! It is one of the targets we have set but as a coach, I just focus on the processes for now.”