Exclusive: Katy Daley-McLean - “We now have the opportunity to go to Italy and finish with a Grand Slam" 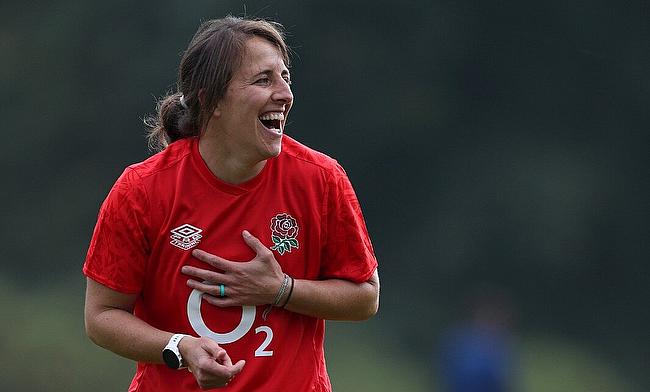 The Red Roses were crowned Six Nations champions on Sunday thanks to their friends from north of the border.

Scotland battled to a 13-13 draw against France in Glasgow which made it impossible for anyone to catch Simon Middleton’s side in the final round of fixtures taking place this weekend.

Playing Italy on Sunday with hopes of securing another Grand Slam title, England’s women have had to wait a long time to return to action.

It has been almost eight months since the Red Roses swatted aside Wales in front of a record breaking attendance at the Twickenham Stoop, but within a matter of days, the final weekend of the Six Nations was put on hold due to the coronavirus pandemic.

But despite not playing since March, England's second successive Six Nations crown has already been wrapped up and fly-half Katy Daley-McLean says she wasn’t initially aware of the signficance of the Scots’ result against France.

“If I’m honest, I only caught the second half of the Scotland game because I used to play alongside a lot of the Scottish girls at Loughborough, so I wanted to see how they were going,” Daley-McLean laughed.

“I hadn’t really put two and two together to realise the implications of a draw making us champions. I was just really pleased for those guys to get that draw in Scotland which is something they had never done.

“Then something on our group chat came up, saying congratulations, that we were champions and we were going to finish for a Grand Slam. It is a weird way to win it. I think you always want to win it with a game or with a win.

“We now have the opportunity to go to Italy to try and finish with a Grand Slam and if you are Italy as well, it is a massive opportunity for them to really ruin that party for us in a game that is very important for Italy in terms of qualification for the World Cup.”

With a World Cup qualification tournament coming up in December, Daley-McLean knows how much the Italians will be looking to kick-start their preparations with a potential upset over the Six Nations champions in Parma.

Andrea Di Giandomenico’s side faced Ireland last weekend at Energia Park and ran the hosts close, but ultimately lost out 21-7.

In terms of England, Middleton's players may have an advantage having had a near perfect block of Allianz Premier 15s fixtures to generate some rhythm.

Two fixtures across the opening rounds were affected by Covid-19, including one involving Daley-McLean’s new side Sale Sharks Women, but the 34-year-old sees this time of the year as no different to a normal schedule despite the current climate.

“I think it is definitely going to be a bit easier for us because we have had a run of club games and we have been meeting as a squad for the last five weeks, so we have had quite a bit of time in terms of prep,” Daley-McLean said.

“It will probably just feel like a normal autumn series for us, but with the added bonus of actually finishing the Six Nations and going for a Grand Slam. We have probably had a reasonable level of prep that Midds would be really happy with in normal times.

“I think the only sad thing is, for us as players, is that family and friends won’t be able to make the travel. I had family coming out for that Italy game originally and with the current climate, nobody can travel so that could be a bit strange, lifting a trophy, potentially a Grand Slam, to an empty stadium.”

In the domestic game in England, fans are still not permitted at venues and players across all sports are having to adapt to the unusual and eerie atmosphere of a stadium with no-one watching from the stands.

For England’s last game, just shy of 11,000 people were present at the Stoop in West London as the Red Roses asserted their dominance on the competition. This weekend at the Stadio Sergio Lanfranchi will be much different, but it will mark the beginning of a new journey.

As of Sunday, it will be 10 months until the start of the 2021 World Cup in New Zealand. Having been part of the 2014 squad that won the tournament in France, Daley-McLean is more than aware of what it takes to become the world’s best side.

Like anything at the moment, looking ahead to the future seems a somewhat fruitless task, however with things as they stand, the England fly-half believes there is no better time to start building for another World Cup push in what will be the ninth edition of the women’s tournament.

“The girls have kind of talked about it,” Daley McLean said. “It is something like 10 games between now and the World Cup. I think that you have got to start now. In terms of performances, you want to be building team performances, individual performances, but in the same respect, you can only focus on what is in front of you.

“For us, that is going to be about making sure we play well against Italy, that we go and finish this job we started way back in February and make sure that we get that win.”