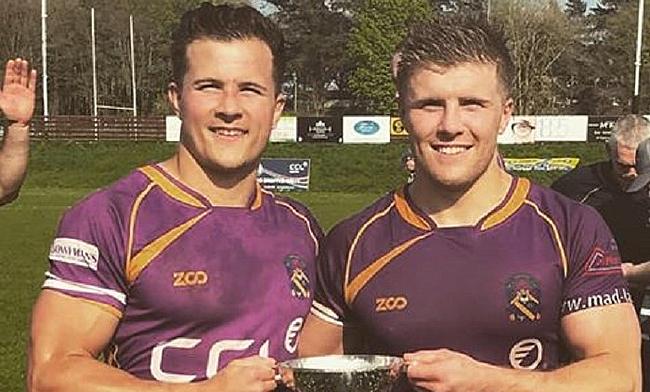 Scotland make 14 changes for France clash
‘We are not here to just make up the numbers’ - Landry
From Cambridgeshire to Nice: Rory Hutchinson’s rise with Scotland
Khan positive about chances of Jamaica and Chinnor

Most male Scottish rugby players below the national squad level are currently putting in the hard yards as pre-season continues for the upcoming XV-a-side campaign.

Three exciting talents have managed to escape for a few days though - and Marr duo Scott and Conor Bickerstaff as well as Robbie Chalmers, who played for Edinburgh Accies last season and is set to join a Super6 franchise for 2019/20, are in Glendale, Colorado in the USA getting ready to play for Tiger Rugby in the RugbyTown Sevens.

The RugbyTown Sevens takes place from Friday to Sunday and the Scots will be linking up with high quality players such as England’s Tom Varndell and Fijian Vatemo Ravouvou as Tiger Rugby look to go one better than their second place finish in 2018.

Among the Tiger Rugby coaching team for the event is USA Sevens legend Perry Baker and the team will play against the Celtic Barbarians, a Denver Sevens Select, the SoCal Griffins and Tsunami Sport Barbarians in the pool stages.

“We cannot wait to get started, it should be a great weekend,” Scott Bickerstaff,” told TRU.

“I was lucky enough to play for Tiger Rugby twice last year, including in Glendale, and it really was brilliant.

“I have trained with the wider Scotland Sevens squad and played for select sides like PROJECX Waterboys and that has all been brilliant as has the opportunities with Tiger Rugby as I continually try and test myself at as high a level as I can.

“There are some big names and some talented guys in our squad and it is all about learning from them and helping them to get the team through the pool stages and then see where it takes us.

“It is also great to be able to make this trip with my brother Conor and Robbie Chalmers and hopefully we can show a wider audience that there is some good sevens talent in Scotland.”

Scott Bickerstaff has been a prolific try scorer from the wing for Troon-based Marr over the last few years, scoring 151 tries from 165 appearances, and the figure which is rising rapidly shows that he will certainly be one to watch in Glendale.

As will younger brother Conor Bickerstaff who has bounced back from a ruptured ACL which saw him sit out most of the 2014/15 campaign and another injury to the same knee meant he missed most of 2016, but now he has become one of the best backs in the Scottish club game.

Conor Bickerstaff said ahead of his Tiger Rugby debut:  “I think this will be a step-up from tournaments that I have played with Marr, the PROJECX Waterboys and the Rex Club Red Kites as we will be playing with and against quite a few professional players or guys who have played on the World Series circuit.

“It should be a great experience, the game in the USA is growing so fast in both sevens and XVs so there should be a really good atmosphere.

“As soon as I get back, we have the start of the Scottish Cup and then the new-look Tennent’s Premiership and I think this trip will leave me in a good place heading into the season.

“I am captain of Marr and I take that responsibility seriously because it is my local club and I think good things are ahead for us.”

Thirdly, Chalmers, the son of former Scotland and British & Irish Lions stand-off Craig, has also had previous experience of playing with Tiger Rugby like Scott Bickerstaff.

“We were gutted to lose out in a close final to the British Army last year,” the 21-year-old back recalls.

“The way the whole squad was looked after last year was amazing and I cannot wait to see some old and new faces at the event.

“We are all focused on trying to go one better this time and hope to win the event if we can.”

James Walker from Tiger Rugby said of the Scottish trio:  “We know both Scott and Robbie very well as they’ve been on numerous tours with us.

“Scott is a machine and really locks down whatever side of the pitch he’s on defensively as a wing or prop while bringing loads of power and pace.

“Robbie has come along enormously well over the last two years as a player and just brings a very natural eye for a gap as a attacker and distributor. He also has a huge heart as a smaller player.

“Although this is Conor’s first Tiger tour, we are well aware of what he brings as a creative, dynamic ball player having watched him a number of times. He will probably play as a hooker for us this weekend. The boys are terrific.”