From Cambridgeshire to Nice: Rory Hutchinson’s rise with Scotland 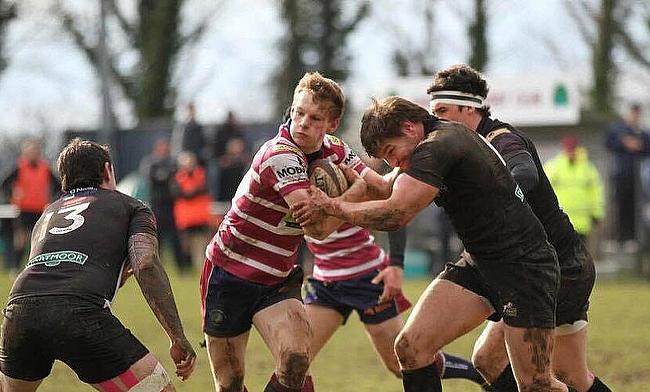 Scotland confirm matchday squad for France clash
Hogg dressed to impress one weekend, but now keen to standout on the rugby pitch
Quiet family guy Ritchie keen to up the volume on the field in a bid to make the World Cup
Cool customer Russell not feeling pressure ahead of the World Cup

When Northampton Saints stand-off/centre Rory Hutchinson comes off the bench for Scotland on Saturday evening to earn his first full international cap, it will not just be those near Franklin’s Gardens and north of the border who will be cheering.

Anyone who has been involved with Shelford Rugby Club in Cambridgeshire will also be cheering loudly as the 23-year-old trots onto the pitch at the Allianz Riviera in Nice as the Scots play their first of four World Cup warm-up games.

That is because Hutchinson started his rugby journey at The Davey Field around 13 years ago, coming through the youth ranks there into the senior first team before being snapped up by the Saints Academy.

The rest, as they say, is history, but Hutchinson has never forgotten his roots and Shelford have certainly not forgotten him.

“Rory came to the club when he was around 10 or 11 and he was coached by myself because one of my sons was in the same age group,” current Shelford president Rory Finlayson said.

?? YES YES YES HUTCH??????
Just BRILLIANT and so well deserved. All us #peacocks be chearing loudly and proudly when you step up off the bench - what a journey, what a story so far... Can't wait to see what the next chapter brings!! ???????? #peacockfamily @RoryJHutchinson https://t.co/675VBwopAd

“He was then with the club until he went to Northampton Saints at around 17 or 18.

“From a young age we could see that he was a talented ball player and had an eye for a gap and while he played for Cambridgeshire, he wasn’t selected further up the chain and that allowed him to start looking into the Scottish Exiles route, so Scotland’s gain was England’s loss at that point.

“The Scottish Exiles have their local sessions in our area down at Shelford, so it was handy for Rory and he could just hop from one training pitch to the next really.

“It was obvious he was a talent and I still see him as a stand-off. He was a prodigious kicker with the ball in hand or off the tee. As a 10 he would take the ball to the line a lot and at the time we were lucky to have a talented team so he also played a bit at centre and at full-back.”

So, how did he progress from those age group sides into senior rugby?

Finlayson said: “As soon as Rory turned 17 he was into the first team, indeed he was such a talent that we were counting down the days until his birthday that year!

“He fitted in at that level easily really and we all thought he would go higher.

“His Saints opportunity came about when they saw him playing for the Scotland under-18s and things have gone from there, but he has never forgotten us.

“Indeed when he won one of his Premiership Player of the Month awards he contacted me straight away and told me he had 25 tickets for a Saints match for use and he wanted me to bring the ‘old boys’ from the club to the match.

“We did just that and it just showed the mark of the man and what he is all about.”

Although there is 360 miles between BT Murrayfield and The Davey Field, Finlayson and many others will be smiling from ear to ear when Hutchinson makes his Scotland bow.

“I have been coaching for many years, more than I care to remember, and all you want from all of that hard work is for the best players who come through the system to play at the highest level,” Finlayson stated.

“I am just bursting with pride for Rory, he is such a nice guy who is humble and never gets above his station. He has come from a very grounded family and a very grounded club in terms of Shelford.

“It will be so pleasing to see him out there playing for Scotland. He loves playing an open game and he seems to be getting that with Northampton and now with his national team.

“We are a very cosmopolitan club and have English, Scottish, Welsh and Irish youngsters currently amongst our 450-500 junior members.

“For them to see someone like Rory playing international rugby is huge and a big boost to us as a club where we currently run five senior men’s teams, two senior ladies teams, three girls teams and boys teams from under-7s right up to the under-18 colts.

“Weekends at the club are always very busy and I am sure lots of people will be tuning in on Saturday night to watch Rory hit the heights.”

Scottish through and through

Although he was brought up down south, there was no doubt that Hutchinson wanted to represent his mother Kirsty’s Scottish roots given half the chance.

The player himself told us this week: “If it wasn’t for the Scottish Exiles, the under-18s and the 20s then I wouldn’t have played the vast majority of my rugby to date.

“As a young player, I was on the bench for Northampton in the ‘A’ League and such like a few years back, but I played two whole Six Nations and three World Cups with the Scotland under-20s so that was a massive chunk of my rugby as a young player.

“Scotland have put a lot of work and time into me. I just want to make my family proud and represent Scotland.

“My grandfather [Bill, originally from Scotland] is not here having passed away when I was little while my grandmother [Isobel] is with us down south now.

“My grandfather was very much into sport. He passed away when I was about four, but I know he will be looking down and wishing me all the best.

“My gran used to live up in Bellshill in Glasgow, but is now in Cambridge being looked after down there.

“Several times when I was younger we went to Scotland for holidays. I went to Loch Rannoch a few times, which is a beautiful part of the country.

“It would just be a dream come true to represent my family and to represent Scotland. I like to think I have worked very hard to get into this position and if I do play it would be brilliant.”