Toulon knock Leinster out in thriller 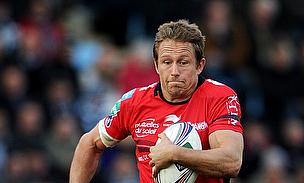 Reigning champions Toulon emerged the victors of an entertaining Heineken Cup quarter-final with Leinster, winning by 29 points to 14.

Xavier Chiocci and Drew Mitchell crossed for Toulon in the second half and Matt Giteau kicked 10 points to put the home side through to the semi-finals, where they will host Munster.

Jonny Wilkinson kicked a brace of penalties before leaving the field due to injury and Delon Armitage was the third Toulon player to successfully land a penalty.

Brother Steffon was named as man of the match for a dynamic display.

Jordi Murphy touched down late on for Leinster but that came too late to mount a recovery in what was Brian O'Driscoll's final Heineken Cup appearance.

These two sides have won the competition four times in the last five years but this was their first meeting.

Toulon started the stronger and were 6-0 up thanks to Wilkinson's trusty left boot and could have stretched the lead had it not been for some desperate Leinster defending.

Mathieu Bastareaud was central to much of Toulon's play early on and the home side were roared on by the home crowd at Stade Felix-Mayol.

He was twice involved in the build-up to Wilkinson's first penalty and the England man subsequently put David Smith through but he was denied by a Rob Kearney interception.

Toulon had several chances to extend their lead but could not make them count, wasting a number of opportunities.

Wilkinson was forced off following a collision in the 28th minute which came as a result of him having to clear hurriedly after more errors had put his side under pressure.

Leinster capitalised on their good fortune with a brace of penalties from Jimmy Gopperth taking them into the break level at 6-6.

But just five minutes into the second half, the jeers from the crowd turned to cheers as Toulon raced into a 10-point lead.

Giteau landed a penalty from near the halfway line, making amends for an earlier miss before prop Chiocci crashed over following good work from Giteau, Juanne Smith and Danie Rossouw.

Gopperth slotted another penalty to reduce the arrears but Toulon were not to be denied.

The next score came after Rossouw disrupted a lineout and Steffon Armitage hacked the ball downfield.

He won the foot race, Bastareaud crashed through three tackles and Mitchell shrugged off Gordon d'Arcy to score a vital try after 62 minutes.

Giteau converted and Delon Armitage then landed his penalty - also from the halfway line - to establish a commanding 26-9 lead.

Leinster responded by scoring a well-worked try, Murphy being bundled over from a lineout drive 10 minutes from time.

Gopperth missed the conversion and any hopes of a late comeback faded as the ball sailed wide.

Toulon ended the game with 14 men after Florian Fresia was sin-binned for a dangerous tackle on Eoin Reddan but it made little difference.

Kearney denied Smith a score only for Giteau to score a late penalty to seal Toulon's passage into the semi-finals.