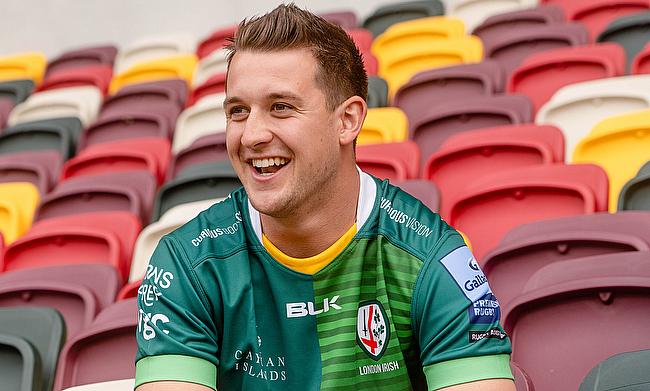 Tom Parton made his senior debut for London Irish three years ago and since then, the academy graduate has been integral in helping the Exiles return to the top-flight and enter a new era.

The Gallagher Premiership is back on our screens this weekend with all 13 teams eager to experience some success, but for Irish’s 23-year-old full-back and his teammates, they realise their club are very much on an upward trajectory.

Last season’s ninth-place finish and a run to the quarter-finals of the Challenge Cup represented another step in the right direction for the Exiles. With star names staying put and exciting homegrown talent keen to create a new dynasty in Brentford, Parton hopes this is just the beginning for Irish.

“I think a big part of the steps we have taken was us moving back to London,” Parton says.

“For us having that sense of collective belonging as a group was massive because I think in the past, I don’t think there was that sense of ‘we are in it together’ because boys were trekking it out to Reading. There is now that real sense of one common goal.

London Irish host Leicester Tigers in the club's first game at the Brentford Community Stadium this weekend, but can the Exiles use their new home as a springboard for success?

“We all see where we want to get to and we all kind of experienced it in patches last season that when we are at our best, we sort of know how it looks and how it feels. Now it is just about us doing that for longer and being able to put performances together much more consistently.”

The sense of cohesion within the London Irish ranks is something that has grown over the last two seasons and when you trawl through the club’s squad list, they do have an evenly spread mix of international experience and an assembly of homegrown talent spearheaded by Parton and his partners in crime, Ollie Hassell-Collins and Ben Loader.

Plenty of headlines were attributed to the club’s dynamic back-three last term and whilst past Irish academy talents may have moved on to pastures new, that doesn’t seem to be the case anymore.

Where once Exiles fans may have expected their exciting prodigies to depart, key personnel are reassuring them that they are here to stay.

“I think it is quite rare to have me, Ollie and Ben being 23, 22 and 22-years-old and have the same vision that we have,” Parton says.

“I was speaking to Blair [Cowan who the club released in the summer in order to take up a playing opportunity in Japan] about where we can take the club and he said it would be on us. It is going to be how much we can drive standards and build the culture within having come through the academy when we were 13 or 14 together.

“I think it is going to be massive for younger lads seeing that and us being able to help them now, which seems weird because we were getting helped out not too long ago!

“We will look to firstly do our job for the team however that looks. We will look to put our best foot forward in terms of playing, in terms of training and then if other lads need anything, we will make sure we are always available for chats to go through anything with them.

“It's something that I don’t think we have talked about as a three yet, but we probably should do! It is really exciting and that togetherness is what I think will definitely help the club move forward.”

https://t.co/wINHhDAU6l @parton15 : 'To win the Six Nations again would be a moment I would cherish for a very long time'. Our latest #EmergingTalent interview on the eve of the U20 Six Nations. pic.twitter.com/bDGvuDlYsm

Parton’s buoyance isn’t just for show. As he alludes to himself, the fact he is still only 23 and is a focal point of the culture which Declan Kidney and Les Kiss are trying to create is a testament to his influence on the side, but the flying full-back is not resting on his own laurels.

During the off-season, Parton enjoyed some downtime with his family but his rugby brain didn’t switch off entirely. Despite gaining many admirers last season and catching the eye of Eddie Jones, the former England U20 international conducted an internal review and highlighted a couple of work-ons that he can bring to his game this term.

“I think last season was OK, but I still think I have got a lot of areas that I want to improve on,” Parton reflects.

“I have had chats with coaches about these things and they were like ‘cool, sweet, go ahead with it!’. It is now ultimately about doing it in games and testing yourself in training, practicing more and more and being exposed to it.”

On his experience with England in the summer, Parton adds it has only whetted his appetite to carry on improving: “It was a really good week. I learnt a hell of a lot just in terms of how professional the set-up is as you would obviously expect, but you quickly realise that every detail is looked at and gone through really clearly. The whole thing has made me definitely want more.”

England will no doubt be in Parton’s thoughts from time to time this season, but the return of the Premiership this weekend will be at the forefront of his mind.

Irish’s first home game of the new campaign comes next week when they welcome Sale Sharks to the capital, but Brentford Football Club have given Parton and his teammates a taste of what the atmosphere might be like with a full capacity at their stunning new home.

Last month, The Bees cut the ribbon on the new Premier League season in style with an exhilarating 2-0 win over Arsenal - to the delight of Parton - but the energy generated within the stadium is something Irish will be looking to harness.

Brentford win their first top-flight game after 74 years and this is what it means... pic.twitter.com/R9ZTwDhtf1

“It was awesome to see how loud it was and to just hear it on the TV to see what it means to people to have live sport back,” Parton says. “We kind of had it in glimpses last season with a few thousand allowed in. It was just nice to run out and hear the scream of fans again or scoring tries and hearing that roar. It is why you play the game; to get fans up off their feet and to put smiles on faces so hopefully it can be full for our first home game.”

Let’s see if Parton and co can give the Exiles fans a similar feeling on Saturday when they travel to Sixways to kick off their season against Worcester Warriors.

Parton points out his side are not putting any early targets in place in terms of what constitutes success for Irish this year, but he can’t hide the ambition he and the club share to continue taking the Exiles forward.

“We haven’t put a marker down in terms of where we want to finish because that is not how we operate. I think we have put all the foundations in place for us to be a really competitive top-four team this year and we need to be able to do that more consistently than we have done.

“We had some good games last year, but we didn’t do it consistently enough and now it is just about realising what we have here. It is a really exciting time to be at Irish and hopefully we can do the fans and everyone who is behind the club proud.”