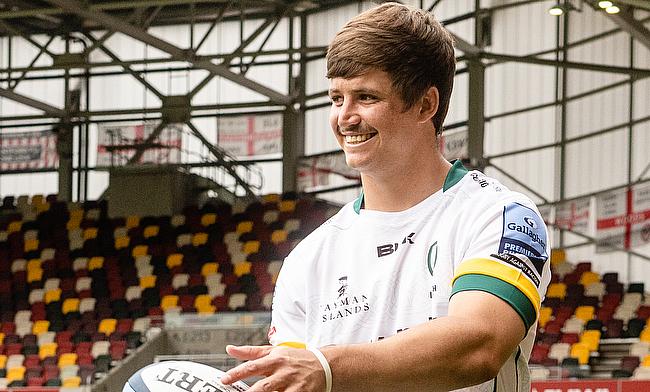 Benhard Janse van Rensburg is entering the next stage of his career.

Just from reading the news reports from his native South Africa, it is clear his departure from the Cheetahs left a ‘substantial void’ in their side.

He decided to move on to pastures new so earlier this year, the 24-year-old boarded a plane to Japan where he was soon rubbing shoulders with the likes of Saracens’ Alex Goode for NEC Green Rockets in the Top League.

Now, van Rensburg’s rugby journey sees him enter the bright lights of the Gallagher Premiership having signed on the dotted line for London Irish at the end of June.

Over the last month, he has been settling into life in the capital and the versatile back has quickly immersed himself in his new surroundings with van Rensburg and his partner, South African athlete Eljone Kruger, taking in the sights of London.

“London life is a bit different for me, but I am adjusting to it really nicely,” van Rensburg tells TRU. “We have a found a place to live which is really great and in the team, I am settling in as well. The players have been really nice so it didn’t make it difficult at all for me to settle in. Plus, the coaches tell you what they want to see from you so you know what to do. That makes it easier for me to know where I am and know where I stand in the team.

“Off the pitch, this is the first time I am really in London and in England! Me and my partner have both been to London to Piccadilly Circus, and you can just walk around there all day which was quite nice!”

Van Rensburg has actually been to England before back in 2016, but it was only a fleeting visit to represent the Junior Boks in the World U20 Championships in Manchester.

Having had stints with different teams in South Africa over the last five years, his attitude towards pushing himself is engaging when he explains his decision to move to these shores.

“Whilst I am still at this age, I want to challenge myself and play high-level competitive rugby,” says van Rensburg.

“My body is still young. I am 24 so that is what I want, the competitiveness. Like I have said to a lot of people, the team that is last in the Premiership, there is always a 50-50 chance against the team that sits in first so it is anyone’s game on the day and that is what I need at this stage. I don’t want to play rugby that is not competitive.”

Van Rensburg represented the Cheetahs 34 times in the Pro14 and many South African stars from his home country have made their way to the Gallagher Premiership in recent years.

The kind you used to always practice as a kid! pic.twitter.com/LUOxjCQmim

The path which the 24-year-old has taken is becoming a well-trodden one. Jasper Wiese - who also left Bloemfontein at a similar time to van Rensburg - burst onto the scene with Leicester Tigers last term whilst Sale Sharks’ JP Du Preez and Bath duo Jacques du Toit and Tian Schoeman have also followed suit.

“I spoke to a lot of them before moving over here, just to know how far they are going to be from me so I can go and visit them!” van Rensburg laughs.

“I’ve got to be honest it is always nice to speak a little bit of Afrikaans to some of your old mates! I know I moved here because of the competitiveness of the league, but it is always nice to have a Jasper [Wiese], a few players at Bath and Sale Sharks as well so if you do have an off-week, you might be able to visit some of your old friends away from playing against them on a weekend!”

Whilst van Rensburg immediately got to work to impress his new coaches in Sunbury-on-Thames, he would have been one of many South African-based Premiership players to wear a wide grin on their face at the beginning of pre-season.

With the Springboks clinching a 2-1 series win against the British and Irish Lions last month and upcoming clashes against Australia and New Zealand on the horizon in the Rugby Championship, you can forgive van Rensburg for having one eye on the world champions despite the Premiership season rapidly approaching.

“Beating the Lions is a big achievement,” van Rensburg responds when asked about South Africa’s triumphant summer. “It only happens once every 12 years for us so that is something that will stay with the Springboks for 12 years now.

“It definitely gave me a smile on Monday morning training when we were at the start of pre-season. Allan Dell [London Irish prop] was one person I spoke to about it! He is a South African and plays for Scotland so obviously after that first Test, he said he couldn’t not support the British and Irish Lions. He went with them and he thought he had made the right choice, but South Africa came back so Allan was one of the guys I walked up to with a big smile!!

“Look, I think the Springboks are performing really well at the moment. After the World Cup win, they have backed it up with a series win against the Lions and it will be a challenge against Australia and, of course, New Zealand just because of the types of players New Zealand has. It is definitely going to be a challenge for them, but I think it is possible for them to come away successful from the Rugby Championship.”

First match you’ll look out for? ??

Van Rensburg may well be tuning in on Sunday morning when the Boks face the Wallabies in their first away Test match since the 2019 Rugby World Cup final but come the start of next week, his focus will purely be on London Irish’s Premiership opener against Worcester Warriors.

The fact that the South African can play at fly-half, centre or full-back could see him force his way into the plans of Declan Kidney and Les Kiss for next Saturday’s visit to Sixways, but van Rensburg doesn’t want to read too far ahead in the latest chapter of his promising career.

“I am really excited about this squad and the type of rugby London Irish play,” he says. “The competitiveness in the team is good as well because I can learn so much from a guy like Curtis Rona or playing with guys like Paddy Jackson or Nick Phipps.

“There is so much I can learn from them and I hope that is something I can take into my rugby and my career here in London. Can I also just say having guys like Ollie Hassell-Collins and Ben Loader who are younger than me, having them with me also enjoying their rugby and adding to that competitiveness, all of that combines together to make it pretty exciting.