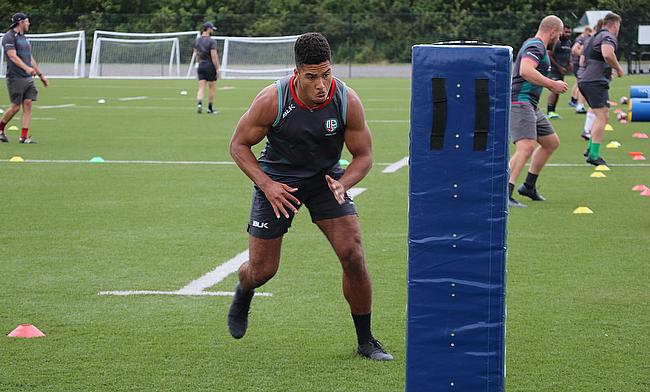 Over the years, London Irish have produced some of England’s brightest stars. Following in the footsteps of Anthony Watson, Jonathan Joseph, Joe Cokanasiga, as well as many more, Ben Loader is another graduate of the club’s academy.

Still only 21-years-old, the wing has set his stall out in the Premiership, scoring two tries in his debut season after a 13-try haul in his breakthrough year in the Championship. Now, with the experience of Waisake Naholo, Sean O’Brien and Curtis Rona around him to aid with his personal development, Loader says his and Irish’s mentality has remained the same in the top flight.

“The two leagues are very different,” Loader said. “The fact we had a strong Championship year and a lot of young guys like myself got to play and got a lot of game time, meant that when we came into the Premiership, for us, nothing much changed. We just kept playing and kept the same goals in mind and the brand of rugby that we want to try and put forward hasn’t changed much.

“We are lucky to have a real blend of experience and youth across the park and not in any one position. Training against and with guys like Wais (Naholo) and Seany (O’Brien) and all those other players, we are constantly learning off each other and these guys have been there, done everything and have been at the top of the game.

“I’m just getting into my career, so I have got so much to learn from them, but I would like to think that us younger guys are also part of taking the team forward as well. The transition was difficult in many ways, you are facing opposition, guys I grew up watching, but it has been good for the team and myself. We are really relishing the challenge.”

Since the 2015/16 season, Irish have been relegated twice and promoted the same amount of times. Until that point, the club had been one of England’s most consistent sides, having been in the Premiership since 1998. Last summer, they announced a number of high-profile signings that would help the side consolidate their position in the competition.

Placed eighth after 13 rounds of fixtures, Irish have had a strong return to the top-flight. Relocating back to London after 20 years at the Madjeski Stadium, it is a move of mixed emotions for Loader. A Reading native, the wing's brother, Danny, played for the football team at the same ground, both making their home debuts at the venue.

“We are sad to see that chapter close, but it’s super exciting moving to Brentford,” Loader said. “The players that we have got and the culture that we have got around the squad at the moment, we are going in really exciting directions. You can feel that there is a real buzz around the club and a real excitement about where we can take this.”

Loader and his teammates are now back in training after four months at home waiting for some direction as to whether the Premiership season will even be completed. Now, there are four fixtures pinned up on the walls somewhere in the Hazelwood Centre, and the players are aiming for a season restart away to Bath on August 15.

“The last four months have been tough, but I think most of the boys have handled it well and you are getting your temperature test, getting your medical checks, all that sort of stuff,” Loader said. “Compare that to when we are stuck at home and having to train on our own, not seeing anyone else.

“For me, it is just great to be back in the environment, seeing the boys again, passing a ball to each other, actually thinking about some rugby. The fixture list has come out and it makes it a lot more real because I think three months ago it all felt very surreal and far away. Now, we are actually working towards how we want to play, our game plans and getting back into the swing of things.”

At the age of 21, the potential of what Loader could achieve in his career is exciting. Similarly to Joe Cokanasiga, Loader had his breakout year in the second tier of English rugby. After 13 tries in 18 appearances, the wing was invited to take part in the England XV’s clash against the Barbarians at Twickenham last summer.

Identified as a young star early on in his career, Loader has represented England U20s on multiple occassions and these experiences have fuelled the youngsters fire to kick on. Also spending a productive season with Esher in National One, he now has time on his side and the talent to gain a starting berth in the Premiership.

“I worked really hard that year, but never expected anything like that [linking up with England] from it,” Loader said. “It was an incredible experience to be around those players. There was a real good crop of players in that team and the coaches. Being able to play at Twickenham, no matter what team, is always an honour. For me, it was an amazing achievement, but also fuels that desire and hunger to get more like it and make the real team.

“Playing for England is a dream and a goal lots of us and lots of young players have. I think that definitely applies to me, but I am very focused on what is next and that is performing with Irish. If that doesn’t happen, all of that stuff beyond doesn’t even come into play, so I am just taking every training session and trying to get better, looking forward to getting out on the pitch again.

“It has been so long and the quicker we can iron out the creases and pave over the cracks, just get back to doing what we know we can do, both individually and as a team, the better.”