Fawcett at the double as Warwick defend Under 18s Cup title 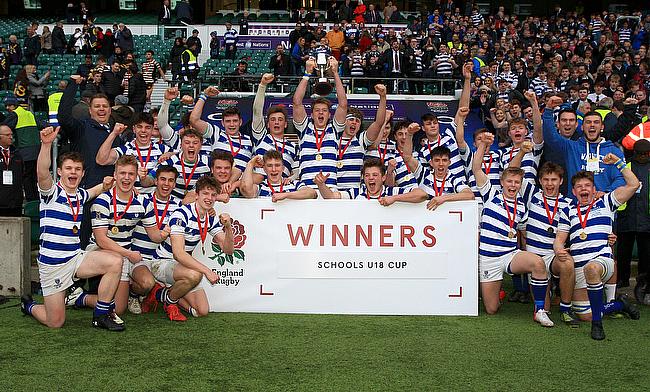 The two schools have significant history in Schools Cup rugby with Warwick winning the Under 15s title in 2013 and 2014 before QEGS beat them in the 2015 Under 15s final. This year it was Warwick’s day however, with Director of Rugby Tom Pierce tasting success in his first season in charge of the 1st XV.

Warwick showed the most intent in the opening stages with Chris David making a superb run up the right wing. The ball was then recycled, making its way to the left wing, and centre Kieran Curran powered his way over the line to give his side a 5-0 lead with 10 minutes on the clock. Fly half Fred Lowe’s conversion from out wide just shaded the posts under considerable pressure from a charging QEGS.

After a period of play in the middle of the park QEGS gained territory, entering the Warwick half, but a strong defence from the men in blue and white halted their advances. QEGS began to build momentum before a well-executed interception from Lowe saw Warwick break away into the QEGS 22. Quick recycling of the ball then gave possession to Fawcett and the number eight charged towards the line for his side’s second of the afternoon. Lowe added the extras to give his side a 12-0 lead after 22 minutes.

QEGS responded well however, with winger Jacob Mounsey going over from close range just four minutes later. The Yorkshire school’s pack won the five metre line out and edged closer to the line before Mounsey found space to go over. The conversion from fly half Tom Stephenson closed the gap to five points.

Warwick then showed their excellence at counter attacking rugby to reach the QEGS 22 once again. The Warwick forwards went inches short of the QEGS line before substitute Alex Sabin picked up from the base of the ruck to burrow over and put his side 10 points ahead as half time approached.

The opening 10 minutes of the second half saw QEGS gain territory and show their attacking intent but a penalty reversal and superb defence from Warwick prevented the Wakefield school from adding to their tally early on.

With 21 minutes remaining a penalty kick to touch gave Warwick possession deep into QEGS territory. The defending champions played with superb width and their slick handling skills took them to within metres of the QEGS line. Man-of-the-match Fawcett then went unnoticed by the QEGS defence, scooping up the ball to touch down for his second of the match. Lowe’s successful conversion put Warwick into a commanding 24-7 lead.

As the match entered the closing stages QEGS looked as if they were going to challenge the Warwick defence but it proved to be too strong and Warwick soon returned to the QEGS half. Fawcett almost had a third, with the number eight charging towards the line only to be brought down just over five metres out.

It wasn’t long before Warwick were back on the score board however, with prop Max Roberts barging over from a few metres in the final moments of the match. That proved to be the last try of the afternoon as Warwick came out on top to secure back-to-back Under 18s Schools Cup titles with a 29-7 victory.

Tom Fawcett (captain):
"It was an awesome performance from the boys and I think everyone really put in a massive shift today, from start to finish," commented Fawcett following their success.

"We're very team-orientated at Warwick and I wouldn't have been able to do it without them."

"I'm delighted for the boys, especially the guys who are leaving this year. Today was their last game and it's so good for them to finish on a high like this."