From Plymouth via Hong Kong and France, Matt Worley is ready to take his chance in England 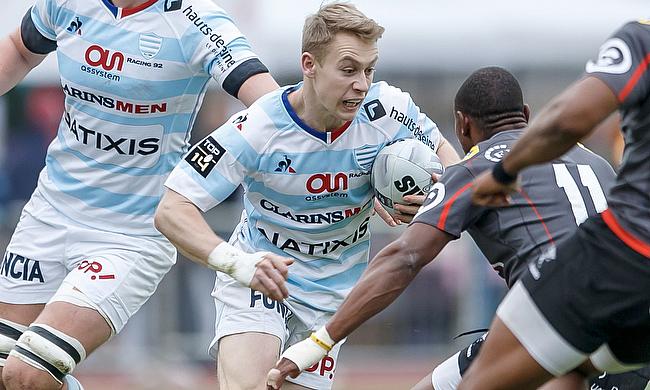 Of all the new players to have joined Gallagher Premiership clubs this summer, it would be hard to find someone who could match Matt Worley’s journey to English rugby’s top tier.

After leaving the country to live in Hong Kong at the age of five, Worley has found a route back to England – via Paris and Racing 92 – to begin the next chapter of his remarkable story with Northampton Saints.

The latest stage in his short career is a cycle home after training: “It is only 10 minutes away,” Worley tells TRU. “It is not too bad but it is uphill! It is not the greatest thing to do!”

It is fair to say the bike ride back to his residence in Northampton is minor when you compare it to the journey Worley has already been on and now he is slowly settling down to life in the Midlands.

Cannot wait to get started!!!! Absolutely thrilled to have signed with @SaintsRugby https://t.co/hgggKvPqLK

Not only is Worley looking forward to a fresh start, Northampton are too after a very disappointing 2017-18 campaign which saw the Saints finish ninth. Following a humbling defeat to Saracens on the opening day of the season, Northampton had slipped to 10th in the division by Christmas and had parted ways with Jim Malinder.

Just over a month after Malinder’s departure, Saints announced Hurricanes coach Chris Boyd as the club’s new Director of Rugby from this summer and the New Zealander has already had an impact at Franklin’s Gardens.

“I am really excited” says Worley. “Boydy was here for the first week in June before shooting back off to Super Rugby and already overhearing conversations, loads of the Saints boys have said there is a huge difference.

“There is a feeling that the organisation and the whole team culture has been enhanced. He is really big on the whole family and ‘team of brothers’ ethos so you don’t just look after yourself, we are doings things for everyone.”

But the notion of ‘looking after yourself’ has become a habit for Worley since he left Hong Kong behind in 2015.

Having moved to Asia from Plymouth after his father, Martin, obtained a job with HSBC, Worley’s childhood was spent in Hong Kong and after taking up the sport at the age of seven, he went on to represent the national team at U16, U18 and U20 level.

But three years ago, his career in rugby sparked into life in an unusual way.

“I was on a partnership deal with my club in Hong Kong and the sponsors of Racing,” says Worley. “They would send a player over to play in a tournament and the second part of the deal was for me and another mate of mine to come over to Paris from Hong Kong.

“From there, Racing were quite impressed. I worked hard and was involved with the academy and it went from there. That was ridiculous. I thought I would be there for three weeks because it was just a sponsorship deal!”

Like with his family move to Hong Kong, his time with Racing was supposed to be on a temporary basis, but once again, Worley was having to adapt to new surroundings.

Of course, moving to Paris sounds glamourous as does rubbing shoulders with star names such as Dan Carter and Joe Rokocoko, but for a 17-year-old Worley who had just finished school, it was the complete opposite to begin with. Struggling with the language barrier and homesickness, it would have been easy for Worley to pack up and go home, but the full-back manged to stay determined.

“It was pretty nerve racking leaving home without knowing where I’d end up,” Worley says. “I knew no-one and didn’t really know where I was, but I just had to be brave.

“In the end, it was an amazing experience to be full-time for one of the biggest clubs in Europe. To play alongside the players you watched and idolised was something I never expected and it was like a dream come true so early on!”

Worley began in the U18s for Racing before being bumped up to the U23s where he impressed in the No.15 shirt. He was part of the Racing Espoirs side who won the title in 2015 and he also started the most games in that season. He was rewarded for his performances by being asked to train with the first team and he was included in the club’s pre-season plans in 2017.

However, the highlight of his time with Racing actually came where it all began for Worley. In February of this year, he was named in the side to take on South African Super Rugby outfit the Cell C Sharks in the Natixis Cup with the game taking place in Hong Kong.

“I remember the very first time Racing came to Hong Kong,” he says. “I was serving drinks behind the beer tent and two or three years later, I was actually playing in that game! It was special to do that and to do it in front of my parents was a proud moment. I think they invited every single person in Hong Kong for the game!

“I thought I was picked for the squad because I have represented Hong Kong, but to get the start at 15 and play 60-65 minutes against the Sharks was something I did not expect to do so I was very lucky and fortunate.”

However, that was to be Worley’s only taste of senior rugby for Racing as his time in Paris came to a conclusion a couple of months ago. Under the eligibility rules in France, the team needed to cut down on the number of foreign players they had and with big names such as Simon Zebo and Finn Russell coming to the club, it meant some of the younger players like Worley weren’t retained.

However, Worley is now hoping to take his chance back in the UK and he realises that first-team opportunities may be more frequent after battling for a place in the 1st XV squad at Racing.

The Saints have been in pre-season training for four weeks and Worley is enjoying his new environment. He adds: “It was certainly a quick turnaround! I had just over two weeks holiday so not the longest! I got to go home and see my family in Hong Kong and spent a week in the UK to get myself ready to start.

“There is a huge difference over here. The intensity is much more focused and at a higher level. I said to a few of the boys that last year, I was on a training camp in the South of France and we went to a beach club one of the days so it is certainly different!

“The success of the young players throughout the squad is something that was a major draw for me, you just have to look at the Wanderers to see how successful the Academy has been."

“The French do their things in their own way and that suits them. It is good to be in a different and competitive environment.”

Academy Manager Simon Sinclair said he was confident that the full-back will “fit in well” at Northampton and Worley is aiming to make an immediate impression at Franklin’s Gardens as he looks to take his chance in England.

“I just want to get on the pitch whether it is 10 minutes or 5 minutes. Any exposure is good exposure and especially playing in the Premiership.

“I never expected to potentially have the opportunity to play in this league so as corny as it is, I am living the dream.

“I am fortunate to be where I am and it just shows that even from a small place in Hong Kong where rugby isn’t as popular, you still do have the chance to show that anything is possible.”